Heralds are divine servants of the gods, each a unique being that functions as messenger of their master and a fragment of divine power followers can summon to aid them.

All heralds except the Spawn of Rovagug have a Challenge Rating of 15.

The herald of Nethys, created out of raw magic to serve him.

The herald of Asmodeus.

The herald of Gorum, forged from a fragment of his sword.

The herald of Erastil.

The herald of Irori.

The herald of Zon-Kuthon. Once a noble spirit and the father of Zon-Kuthon, the Midnight Prince twisted and warped his own father into the abomination he is today.

The herald of Shelyn.

The herald of Cayden Cailean. Thais was a prostitute and close friend of Cayden in his Adventurer days. Cayden repaid her friendship by promoting her to the position after her death.

The herald of Lamashtu.

In General
All gods can select new heralds, or resurrect their old ones, should their herald be slain. Rovagug is unique in how often this happens. His heralds, known as the Spawn of Rovagug, are more akin to living disasters than divine servants. Each time one is incapacitated, Rovagug simply creates a new one over the span of centuries to release upon the world.

All Spawn of Rovagug are Chaotic Evil Colossal-sized magical beasts. 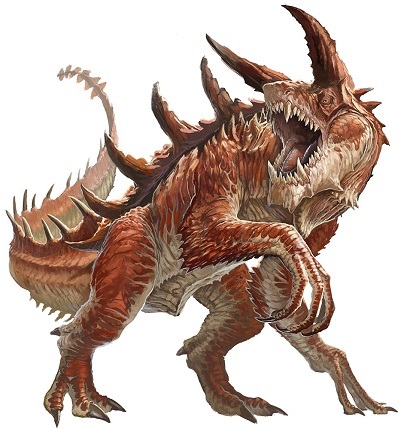 The most recent and strongest yet of Rovagug's spawn. It was defeated by a massive effort of combined forces, sealing it in a cavern and driving it into hibernation.

The first of Rovagug's spawn to crawl forth from the Pit of Gormuz. It rampaged for 473 years before being brought down. In modern times its carapace sits at the center of the Osirian capital of Sothis. 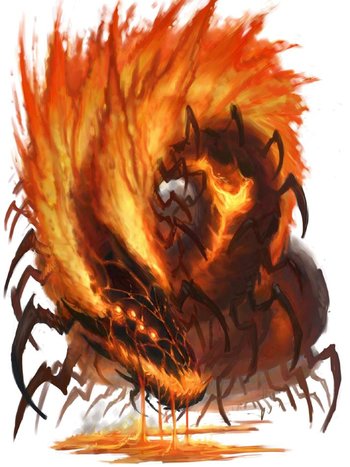 Xotani is a burrowing creature, preferring to stay within its tunnels during the day and ravage the land by night. It was defeated by a cabal of mages atop the Pale Mountain, its bones and still-beating heart sealed in a cavern below the peak. 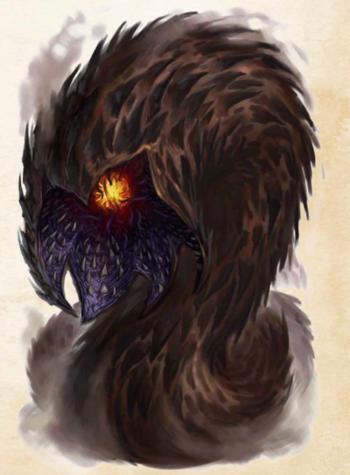 Chemnosit lurks below the crust of the world, preying on the Darklands rather than the nations of the surface. As a result it's nearly impossible to track down and has yet to be defeated.

A flying beast, Volnagur performed attacks on cities continents apart rather than a concentrated campaign in a specific area. It has supposedly been defeated at least three times, but has returned after each defeat and currently remains at large.

Kothogaz, the Dance of Disharmony

Kothogaz spread chaos not only through its own efforts but those of spawned minions and corrupted pawns. It was defeated in a battle said to cost a million lives, after which its heart was extracted and cut into 101 pieces.

The herald of Milani.

The herald of Brigh.