In General
A fraternity of villains whose fraternity house is on the other side of the Dark Forest, opposite to Proxy Mansion. Their primary goal is to either kill or overthrow Slenderman and take over the Under Realm, but due to their stupidity, they are unable to accomplish this.
Enderman 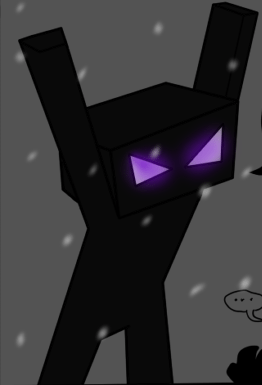 "Why must I be surrounded with idiotic henchmen?"

Enderman is a member of a species of mysterious creature that resides in the world of Minecraft. They are normally neutral but once attacked, they can become very violent. Endermen are very vulnerable to water. He is Slenderman's business rival and arch-enemy. Is always trying to overthrow Slenderman via business tactics or manipulating the Proxies. Barring that, he ultimately aims for crushing all of the Under Realm beneath his feet. 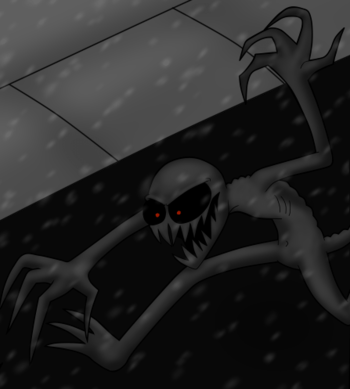 "Never turn your back on me!"

The Rake is a mysterious creature that many believe might be alien in origin. The Rake is feared for his freakish appearance and for his ferocity to victims. Various accounts also revealed that many encounters often ended with the victims committing suicide. He is also Enderman's top henchman. 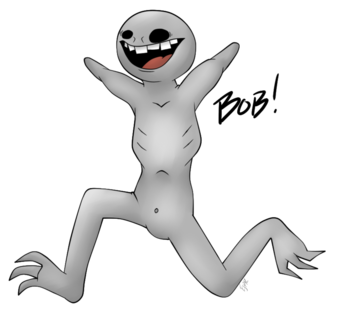 The Brutal Obscene Beast or B.O.B for short is a creature that is said as having a similar appearance to The Rake except he is arm-less, has tiny eyes and has male genitalia. BOB is a man-made creature that was created by scientists that later escaped. Unlike the Rake, who relies on stealth and cunning, BOB attacks mostly using instinct and ferocity. He later became Enderman's dim-witted henchman. His hobbies include dumpster diving and eating worms.

An advanced supercomputer made to assist Enderman in his evil schemes.

Nick
Nick is a human kid and one of Enderman's test subjects, who Enderman performs experiments on to test human "happiness centers".

Eyeless Jack
Has switched to Proxyism. See The Proxies to see his profile.
Mancala

One of many advanced A.I's built by Enderman initially to use as tools for world domination. Although B.O.B ended up accidentally launching the other robots into space, BEN found the first model of the robots and took it to Proxy Mansion, naming the robot "Mancala". After gaining his own free will, he promptly decided to destroy all life, starting with the Proxies.