open/close all folders
One 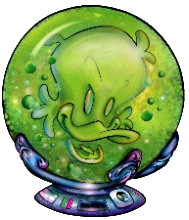 An artificial intelligence created by Everett Ducklair (the reason for his creation varies in Paperinik New Adventures and Pikappa) who resides in Ducklair Tower. Becomes the partner of Donald Duck's superhero persona, Paperinik, aiding him on his heroic missions.

The person who One becomes in the future. Odin Eidolon is one of the most powerful and richest men of the 23rd century, and the owner of the biggest droid manufacturing factory; it's unknown to everyone that he himself is a droid. Can be regarded as a separate character from One, seeing as he's got a bit of Two in him.

"I don't want to hear you talk, I want to see you fight!"

An artificial intelligence created by Everett Ducklair, with a similar appearance to One, who was left in charge of the very secret Omega Chamber in Ducklair Tower. When PK uncovers this part of the tower, the custodian makes it his task to assist him against the new threats now that the hero stands without other allies, but also make him change his methods for dealing with these threats. Constantly berates PK for his way of doing things. 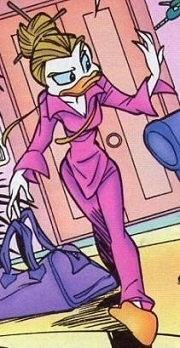 A journalist working for Channel 00, who in Paperinik New Adventures is secretly a droid from the 23rd century and an agent of the Time Police, deployed in the century the series takes place in. In Pikappa she's still a droid, but not from the future. The closest ally to Paperinik after One, and the female lead of the series.

"No universe exists that's as big as remorse."

Once she was a scientist from the planet Xerba named Xado. Today, after an experiment she performed on herself, she is the super-powered being Xadhoom, who seeks vengeance on the Evronian Empire for having conquered her planet and enslaved her people. Becomes an ally to Paperinik, despite their first hostile encounter. 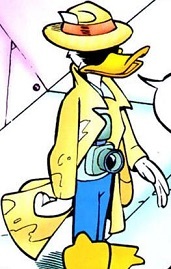 One of the cameramen of Channel 00, often ridiculed for how he comes off as a robot. Nobody knows that his real identity is Stefan Vladuck, who used to be a famous photographer back in the day. 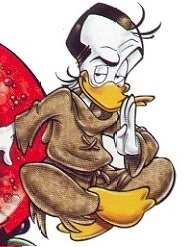 Genius inventor and billionaire industrialist with an unknown past. Due to his nasty habit of creating weapons of mass destruction, he left Duckburg and became a monk at the monastery of Dhasam-Bul to rid himself of his habit, though he'd return to his city should trouble arise. He is also a martial artist. And practically a magician. And an alien with psychic powers. 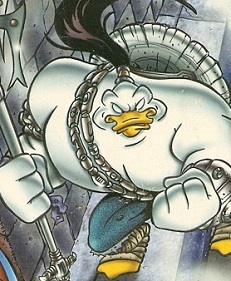 An Iroquois warrior from an alternate dimension where the red people are more technologically advanced. Ends up trapped in Paperinik's dimension and afterwards he becomes an ally to the hero, though they fought each other in the beginning. In Pikappa, however, Urk is an alien and a Guardian of the Galaxy. 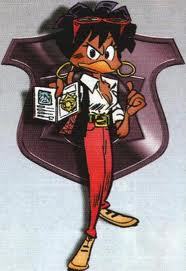 An agent of the PBI (Paperopoli Bureau of Investigation)note Paperopoli is Duckburg's Italian name, who is very cooperative with our hero. 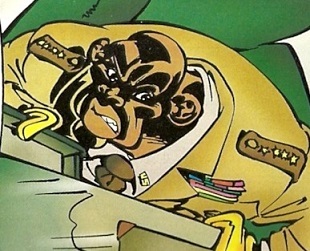 "Access to everything that could teach you something about how the world works should be unlimited and complete."'

An U.S. Army General who is quite opposed to many of the army's conducts, especially their negotiations with the Evronians. 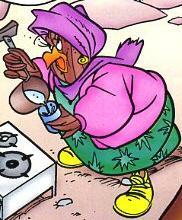 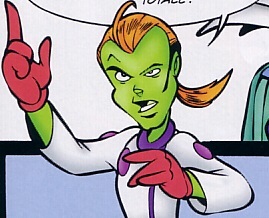 "Doesn't matter what happens, I'll never allow for the drop of our orbital defenses"

Xadhoom's boyfriend and, just like her, one of the political leaders of planet Xerba. Tried to warn Xado of not trusting the Evronians, but the young woman refused to listen to him. He then elaborated a plan to save as many Xerbians as possible, and stayed behind to allow them to flee. He was spared and later the Evronians asked him to find a way to stop a certain Physical Goddess... He accepted, not realizing whom he was tracking down, in order to use his influence over the Evronians to keep them away from the survivors of his people. 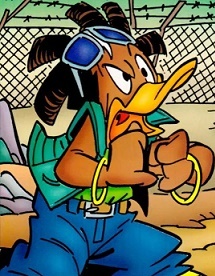 Ziggy works as an errand boy for Channel 00. He was originally going to join the PBI along with his sister Mary Ann, but left before taking the final exam because he didn't like all the secrecy. 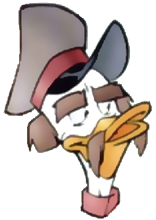 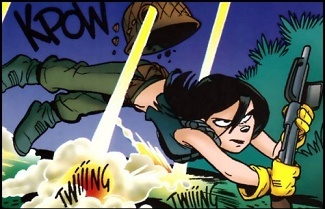 "There is no end, if the memories live. And some hurt more than others."

One of Donald's friendly Starcorp colleagues at Duckmall Center. She has a fair amount of experience when it comes to combat and weapons from her days in the private paramilitary force Seaducks.

One of Donald's friendly Starcorp colleagues at Duckmall Center. Big and shy, he has crush toward Stella Nice, a sales clerk. 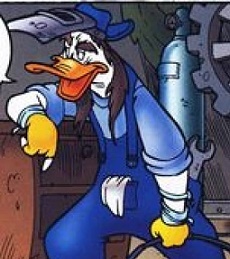 An old-timer who used to assist a different superhero in the old days, today assisting Paperinik. Lives in the old abandoned factory Century. Takes the role of One in PK2 to some extent, by providing the hero with gadgetry and a refuge.