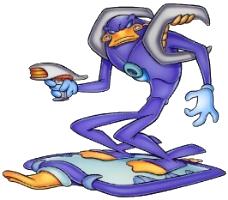 The main enemies in Paperinik New Adventures and Pikappa. And the video game. The Evronian Empire is out to conquer other planets and collect energy, particularly the emotional energy from the inhabitants, turning them into their mindless slaves in the process. Now Earth is on the verge of being invaded by these aliens (they vary in being portrayed seriously and jokingly), and Paperinik's there to stop them.

Evron Eleventh to the Fifth

Evron Eleventh to the Fifth 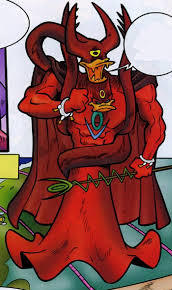 "My title is not purely honorific!" 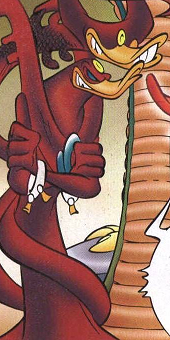 "Since when does Evron respect close pacts with weaklings?"

The commander of the invasion force of Earth, and one of the few Evronians of the Imperial subtype. He's rather frustrated by his underlings. 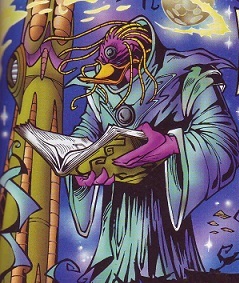 "I hate you because you give body and soul to dreams."

The greatest scientist of the Evronian Empire, and the most sophisticated one. He specializes in creating super soldiers and strengthening Evronians, which he's also done to himself. Becomes incresingly interested in the culture of Earth, ending up being cast out by his Evronian brethren for being too different. Gorthan has a more prominent role in Pikappa. 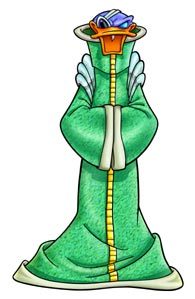 An Evronian scientist who appeared three times in the PKNA series, besides alternate continuities and the PK video game. 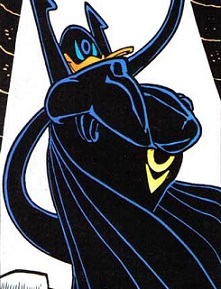 An Evronian General. Appears twice in Paperinik New Adventures and has a bigger role in Pikappa. Was the villain in the video game.

First appearance: Paperinik New Adventures #1 "Shadows on Venus" (confirmed. May have been the unnamed Evronian officer seen communicating with the Evronian warriors faced in #0)

An Evronian General transformed into a super soldier by Ghortan, with tremendous strength and capable of traumatizing his opponents with fear through psychic powers. 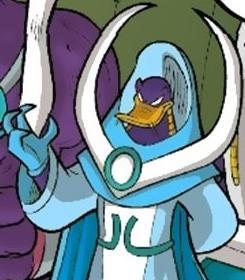 An Evronian the hero meets in the 23rd century, the last one left on Earth. 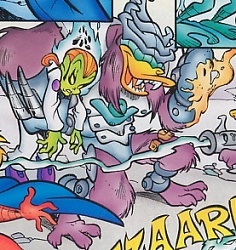 An experimental new breed of Evronian, he quickly proves himself... shall we say, 'loyally deficient'? 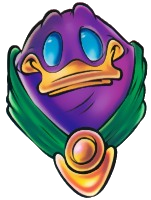 A warrant officer working for Zotnam, both as his assistant and target of his venting.

A spore technician, and the highest-ranking scientist in Bonton's force-Too bad he's a low caste one.

Manootensyon's assistant. Should have been a high-caste scientist, but Manootensyon wasn't competent enough to grow one right.

"Finally I have the might of two forms! And this will allow me to create an Empire!"

The first Evronian, and creator of the entire species. Originated as a strange vegetal monstruosity until possessing the body of the warrior Ur-Evron.

The mindless minions of the Evronians, having been transformed after having their emotions sucked out.