The character sheet for Pangya. 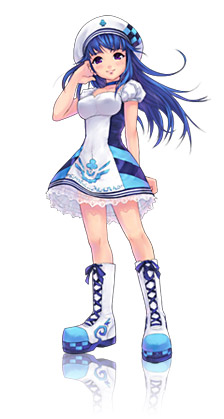 Do you see that young lady entrancing the audience with her magic tricks? Her name is Arin. She comes from a long line of magicians. She may not be a natural born magician like Cadie or Tiki, but she graduated at the top of her class from Wiz Wiz. Her popularity has never been greater during the last 10 years of her career.

So why did she enter the Pangya Competition? When she first saw Max playing Pangya she instantly fell in love; she is a girl after all! To be in the same game with Max, Arin has trained herself in Pangya. She now plays like a pro. However, she keeps making silly mistakes when Max is in sight. When Max isn't there, her true performer nature comes out. Her magic trick that turns her dove into a club amazes everyone every time. She performs better when an audience is present. The hearts you see that trail behind her comet are meant for Max, she says. 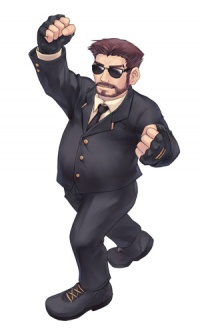 It was Lolo who told Azer about Pangya Island. It's only been 3 months since he stepped onto the Island, but he already has the mind of a Pro. His games are full of fun and surprises due to his hot temper. However, when it comes to making quick decisions, no one compares to Azer the ex-cop. His ability to analyze the situation and make decision in a limited time brings out the best in him on the field. His shots have great power because of his age and the experience that comes with it. 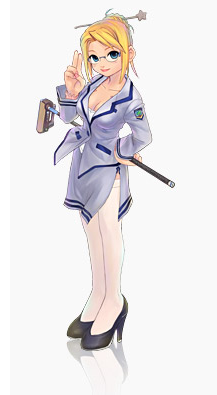 Cecilia is the chief officer of the battle cruiser Silvia, but she is a mechanic at heart. Her ability to analyze problems has gained her the trust of everyone on the ship. With her brilliant mind and brilliant looks, it’s not surprising that she has a large following. She represents the cruiser Silvia in the Pangya Tournament. She excels in Pangya thanks to her sense of direction and ability to calculate distance, but her perfectionist nature sometimes holds her back. 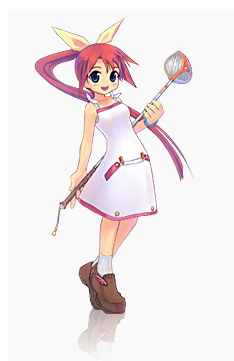 Quma invited Hana to the island of Pangya because of her great comet control. Her stable personality makes her a consistent player; but she lacks the power of a veteran player. However, she makes up for this with her great focus, calm play style and her special ability to curve her shots 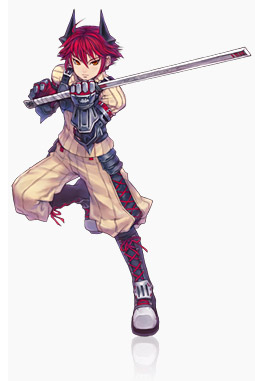 The boy you see walking into the sunset is the most powerful of the Rue Clan, and the most cursed. The Rue clan is infamous for their excellent swordsmanship and dreadful dark magic. The boy travels with a cloud of evil around him. Everything he touches seems to swirl in his uneasy dark aura.

His name is Kaz. He is the successor of an Evil Lord who was been sealed by the ancient Pangya heroes.

However, there is sadness in his eyes. The boy doesn't remember anything from his past. As he walks, a sad spirit holds him gently. The spirit is called Karen, she loved Kaz in life. She always looked out for him. She gave up her life to make sure that Kaz would not become the next Evil Lord. Sadly, Kaz has no recollection of her sacrifice or these events.

The Pangya Tournament is calling to him, perhaps he will find his past once more! 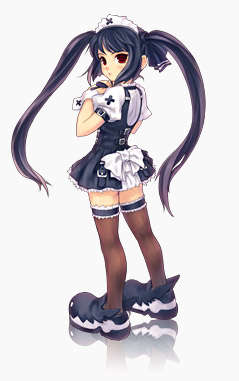 Kooh is the young captain of the infamous pirate ship “Lunar Tomb.” Nobody dares to sail into the Bartos region when Kooh is there. Kooh's life-long search for her lost father who went missing after the battle with the Demon King continues. Some people began to believe that her father joined the dark forces of the Demon King.

To prove her father's innocence, she is headed to Libera where the battle took place many years ago. She may be young, but she is more experienced than the average adult. Her shots have high power and good control. She still needs to learn more things such as spin and curve. 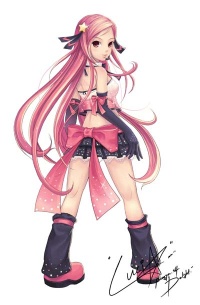 Lucia is the biggest pop star on the market. Her silky pink hair that sways as she sings and dances have captivated her fans all over the world. They always make a scene as they try to get closer to her to take a better picture. Her snappy comments however, may take some time to get used to. 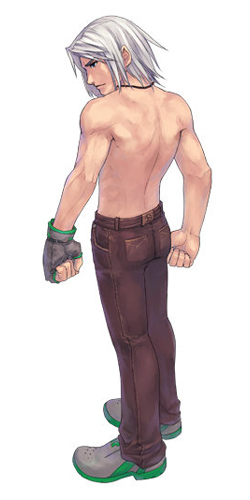 Max is a well-known professional tennis player from Britain. He lived his life as a super star but always had a secret wish that he kept to himself. Because he came from a poor family, he started playing sports for college scholarships. However, sports wasn't where his heart was. He had always dreamt of becoming an aircraft pilot. He occasionally flies his private jet to remind himself. The jet one day broke down and he was about to smash into the ocean; when the Chronos Clan came to save him. He's been on the Pangya Island for a month now. No one thinks he plans on going home anytime soon. He was fascinated with the machines and technology of Pangya Island. When he heard about Ceclia, the captain of the cruiser Silvia was participating in the Pangya Tournament, his heart was set. The tournament gave him the perfect opportunity to get close to Cecilia. 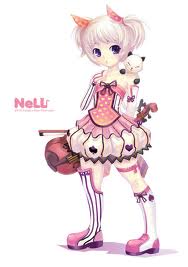 Nell was born from Demon King’s heart. Nell was raised by Cadie, the greatest witch of the Pangya Island, and is completely unaware of this dark past. Perhaps the mysterious power Nell displays is something that belongs to the Demon King? Maybe an inception from Cadie? 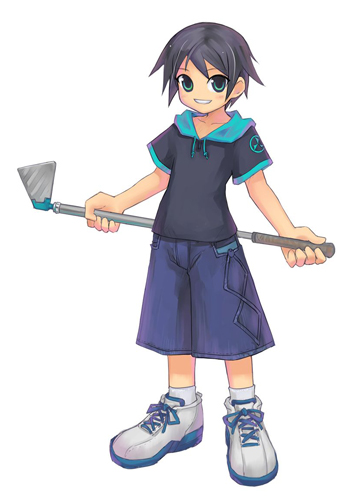 While searching for a device that would allow him to fly further, Nuri developed a passion for golf. Nuri came to know Pangya through the fairy Pippin. It was through her invitation that he was sent to the Island of Pangya. His even pace makes him a consistent player. His play style is delicate and controlled, but he does not have a powerful swing. However, what he lacks in power, he makes up for with control. 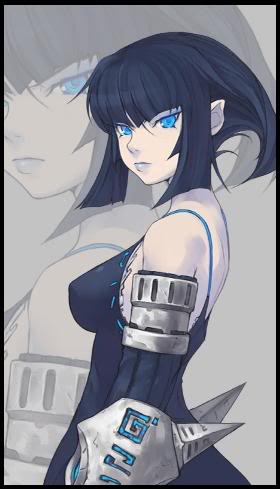 There isn't a lot of information on Cien. She's exclusive to Pangya Portable on the PSP. 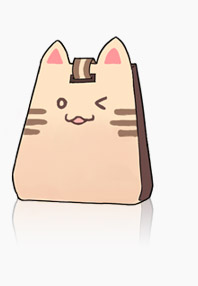 Papel is a living shopping bag at the "Sky hole" store located in Ventus on the Island of Pangya. The "Sky hole" store is where the Titans and Duostars sell their goods. "Sky hole" is having a Papel giveaway promotion to celebrate the Pangya Festival. Anyone who completes the Pangya tutorial is eligible to receive a free Papel. Papel will be your devoted caddie; cheering you on and helping you focus. 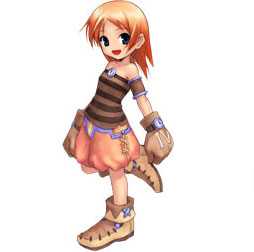 Take a look around. You never know where Pippin or other Cross Chronos Fairies may be hiding in your world. Although the world of Pangya may seem strange to you at first, Pippin will make you feel right at home. Pippin believes your happiness is her happiness. 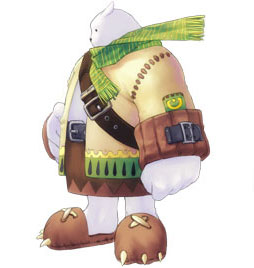 Titan Boo, the forest giant, has never been this happy. The Pangya festival is being held in his hometown of Ventus. You can hear his happy cheer of "Boo~" echoing through the woods.

You can tell he's excited about this event. He is not much of a talker but he and the forest are always on your side. His "Boo~" sounds like a war horn sounding the charge before a battle.

Trees will be on your side, providing shade for you. Trees think of you as their friend since Titan Boo is your friend. 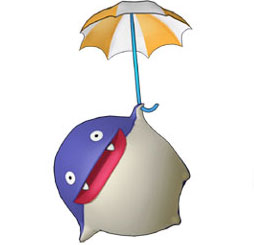 Dolfini is practicing her flying again.

She's failing more than succeeding at this point, but everyone should cut her some slack since she's a dolphin... thing. Dolfini doesn't give up and continues to train herself. Dolfini is determined to soar through the sky one day and reunite with her mother.

Although she isn't quite there yet, she keeps an umbrella with her in case of emergency landing! She was born prepared!

When Dolfini was just a little dolphin... thing, she saw a rocket flying in the sky. That's when she started to believe that what she saw was her mother. Ever since then, she's been practicing flying in hopes of meeting her mother one day.

Dolfini isn't so lonely anymore because she met a friend named Quma on her journey. There’s never a dull moment with Dolfini near! 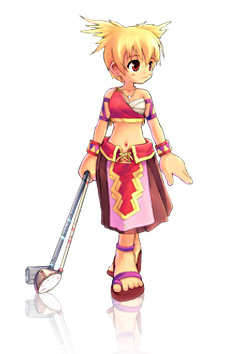 Lolo will always be there to help you.

Don't worry about making small mistakes. Lolo will cheer you on no matter what. Lolo is treated like a princess in her home because she is the daughter of the Libera Tribe Chief. But she’s no ordinary princess like in fairy tales.

Don’t worry about making a fool of yourself, Once she trusts you, she’ll carry you as far as she can! 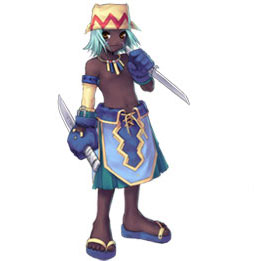 Quma is a young man who believes actions speak louder than words. He may seem a little antisocial at first but he never fails to impress.

Some may call him hot headed (he did follow Pippin into the other world without thinking). He is the type to never look back once he chooses his path. But just because he is goal-oriented doesn't mean he is hard to work with. He will always treat you as his number one priority.

Quma, and Quma's pet Dolfini, will be your best friends and your guides on the Island of Pangya. 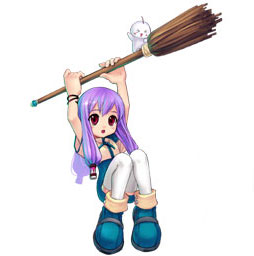 Don't be so harsh on Tiki if she makes mistakes. Tiki is still a witch-in-training. Tiki can't wait to be a proper witch. Then she will guard the forests of Pangya. You’ll always find her riding around on Cadie’s broom stick, practicing her flying.

She falls and runs into trees every now and then, but she never gives up. Although she is training her basic flying skills right now, her dream of guarding the forest is bigger than anybody's.

Tiki says she will be a pro witch like her older sister Cadie! 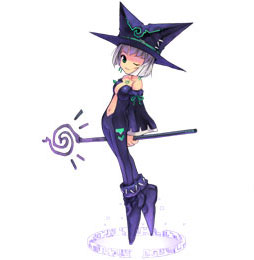 She is experienced enough to be considered a veteran. She even gave away her broomstick to Tiki because she now uses her magic runes to fly without a broom.

Cadie was one of the ancient magicians who helped make the comet to fight off the dark forces. People say that she is more mature now after that event. Sure, she seems to be more considerate to others now, but Cadie is still Cadie. She still listens to no one else when making her own decisions.

Cadie is probably happy to meet you. When she meets you on a course she’ll sing and dance on her way to the tee. Cadie is master of all elemental, dark and light magic. She will be of great help on your journey in Pangya Island. Her fun spirit is contagious, so kill joys need not apply!