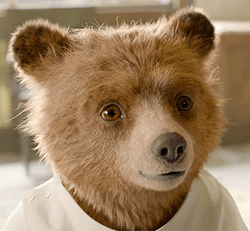 The Brown Family
Henry Brown
Mary Brown
Jonathan Brown
Judy Brown
David Russell
The Browns' American nephew, only appears in the Hanna-Barbera series. He was being picked up at the train station when his aunt and uncle found Paddington.
Mrs. Bird

Traditionally the Brown's live-in housekeeper, although she's established as a relative in the film, though what relation she shares to the family is never specified.