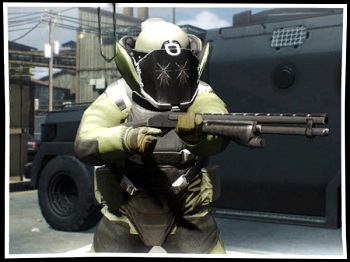 You are up against the wall, and I am THE FUCKING WALL!
Portrayed By: Simon Kerr (Payday: The Heist), P.J. Stoppleworth (PAYDAY 2) (voices), Unknown (Hoxton Breakout Trailer)
Russian Reaper Variant 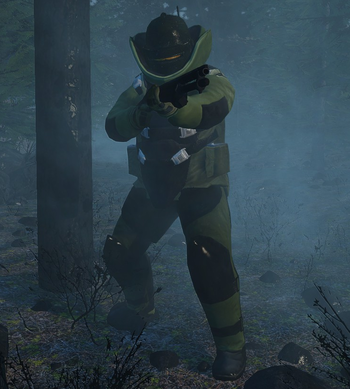 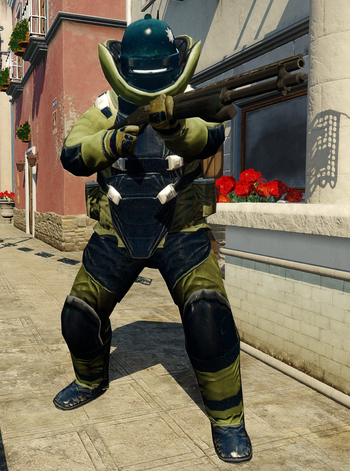 The Bulldozer is heavy police unit in an EOD suit modified to withstand gunfire. Comes in six varieties* though only four of them will only show up under different specific circumstances with different stats - Green Dozers, with a pump-action shotgun, Black Dozers, with a semi-automatic shotgun, and Skulldozers (also called LMG Dozers by Locke), with increased health and an LMG. The fourth variant is limited to Halloween-style events and is a headless Titandozer, either with an LMG or a staff weapon. The fifth variant and the most dangerous of all is the Minigun Dozer, added with the Crime Spree feature, and now available to spawn in normal heists at Death Wish difficulty and above. These tanks will often represent the greatest threat in any given heist, especially if they come in groups. The sixth variant is the Medic Dozer, which differs enough from the standard Bulldozers to warrant it having its' own folder on this page. There are two reskins of this unit; Russian (exclusive to Boiling Point) and Mexican (from the San Martín Bank heist). 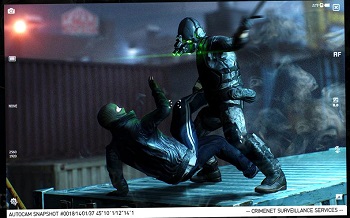 Now go to the forums and cry like the little bitch you are!
Los Federales Variant 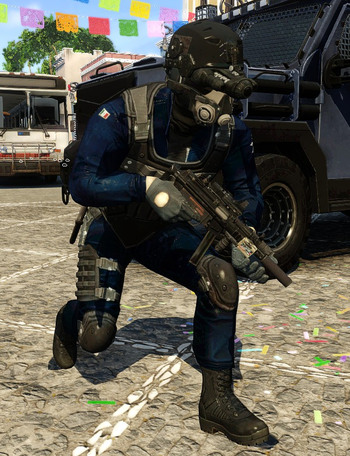 A Spec-Ops infiltrator dressed in urban camouflage, the Cloaker wields a submachine gun, but relies primarily on martial arts and his trusty nightstick. A master of stealth, he can hide himself in small spaces inaccessible to the player, waiting for them to pass by so he can pounce on them for a One-Hit Kill. He wasn't included in the initial release of the game as during the beta, he had the ability to literally kick the player back to their desktop, but he was eventually fixed and released due to excessive demand, to the fandom's... er, "rejoice." Like with Bulldozers, he has a Crime Spree/ Holdout specific variant that will spawn into the level; the Cuff Cloaker, which replaces his ability to kick down the player with a pair of handcuffs, and subsequently also doesn't decrease your health. There are two reskins of this unit; Russian (exclusive to Boiling Point) and Mexican (from the San Martín Bank heist). 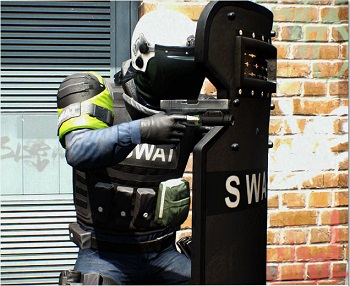 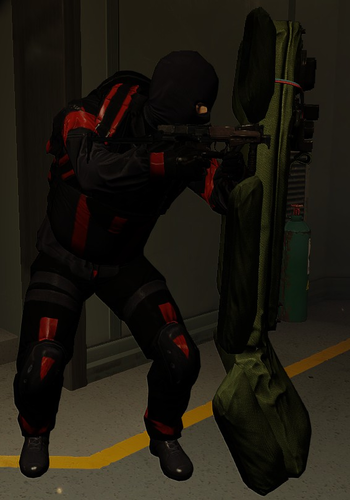 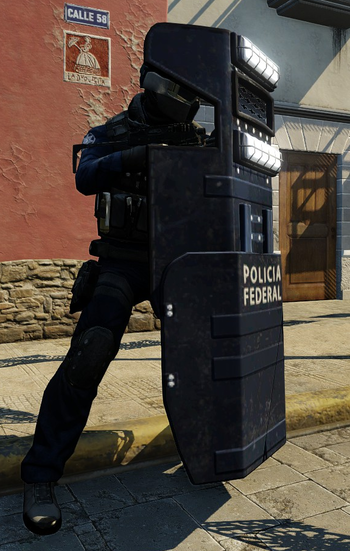 The Shield is a SWAT unit equipped with a riot shield that can block gunfire and your path in narrow hallways or alleys. Shields tend to travel in pairs or greater to suppress players. Can be killed if out-flanked, blown up with explosives or by using armor-piercing rounds to shoot through the shield. There are two reskins of this unit; Russian (exclusive to Boiling Point) and Mexican (from the San Martín Bank heist). 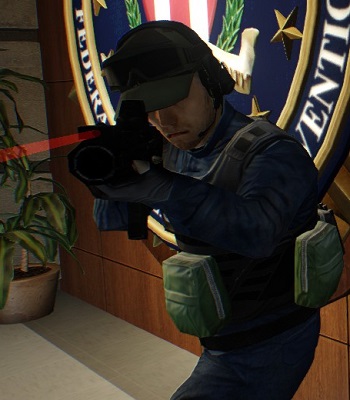 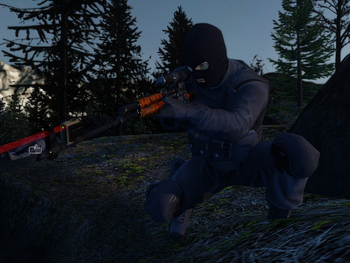 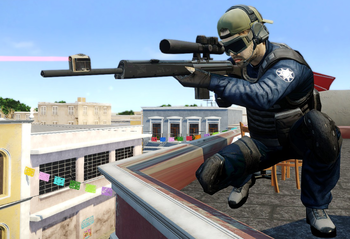 While the Sniper isn't as flashy as the other special units, this ballcap-wearing sharpshooter can be the deadliest of them all in the right situation. Positioned on buildings far out away from the battle, the sniper can take down a player with just a few shots, but he himself can't take a hit. 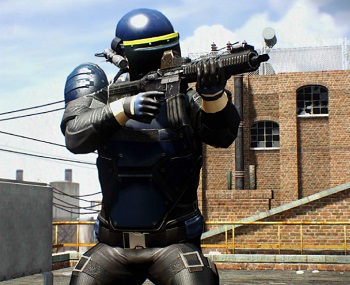 I've got 50,000 volts here with your name on them!
Russian Reaper Variant 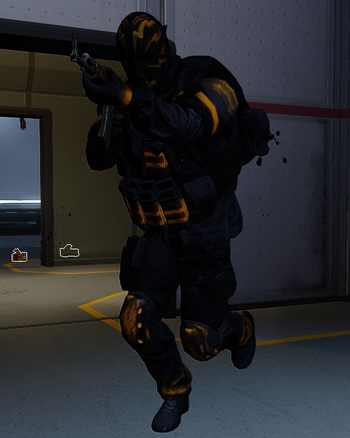 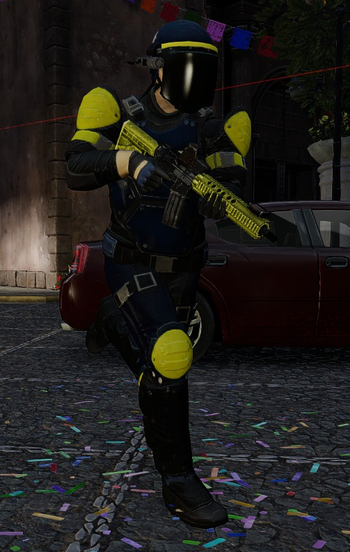 An elite SWAT unit with bright blue and yellow armor that distinguishes him from the basic SWAT members, the Taser is an electricity-obsessed sadist who loves to watch criminals suffer. As his name implies, he carries a high-voltage stun gun for stunning and incapacitating his foes.There are two reskins of this unit; Russian (exclusive to Boiling Point) and Mexican (from the San Martín Bank heist). 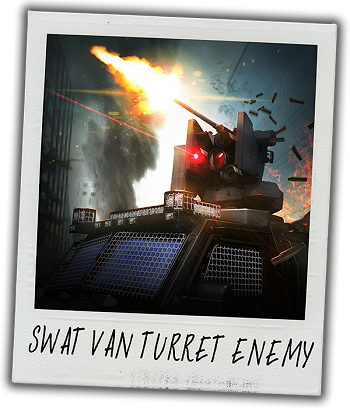 A new enemy type added as part of the Spring Break event on March 17, 2015. The SWAT Turret is Exactly What It Says on the Tin: a remotely-operated turret gun mounted on top of a SWAT van that relies on its large firepower and durability to take down its foes. While anti-aircraft and suitcase variants appear in all difficulties, all other variations only appear in Very Hard difficulty (Hard in day 2 of Goat Simulator) and above. 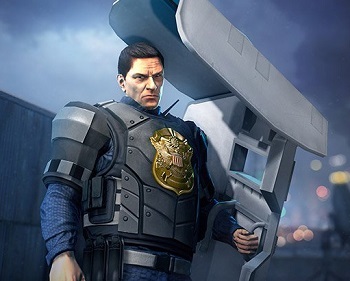 Your captain has arrived!
Portrayed By: Bobby Butler (voice)

Captain Neville Winters is a specialized SWAT member who had worked with Commissioner Garrett in Boston to bring down the Irish and Italian mafias. He was brought over to Washington D.C. to deal with the PAYDAY gang with his expertise on the field and use his leadership skills to inspire and command fellow SWAT units. 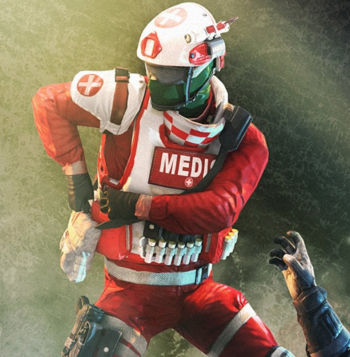 See you in the prison medical ward.
Russian Reaper Variant 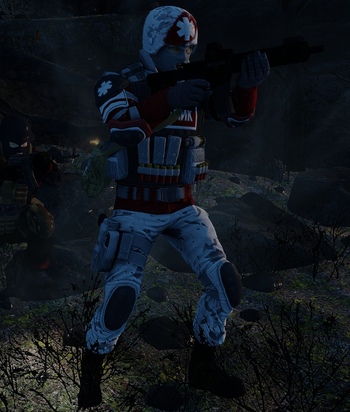 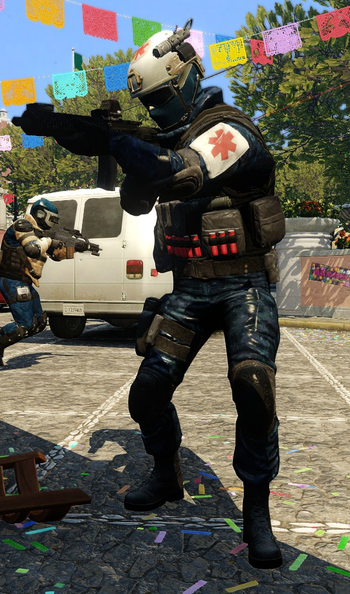 Portrayed By: Joe Zieja (voice)
Introduced during the Hoxton Housewarming Party update, the Medic is a new unit added to the police force. They are capable of negating fatal damage to any other police unit nearby (including other Medics!), with the sole exception of Cloakers. They only appear on Overkill difficulty and above, and here are two reskins of this unit; Russian (exclusive to Boiling Point) and Mexican (from the San Martín Bank heist).
Medic Dozer 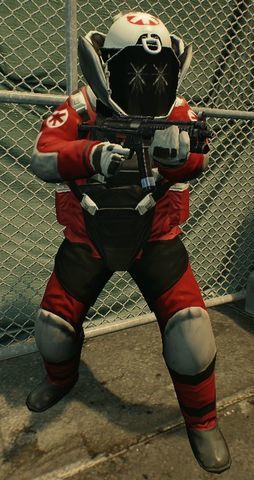 Good news; Free healthcare! Bad news; I'M YOUR DOCTOR!
A special variant of the Bulldozer that initially only appeared on high-level Crime sprees, the Medic Bulldozer is Exactly What It Says on the Tin; a submachine gun-equipped Bulldozer unit with the Medic's ability to revive fallen cops. They were later added to the Death Sentence difficulty.