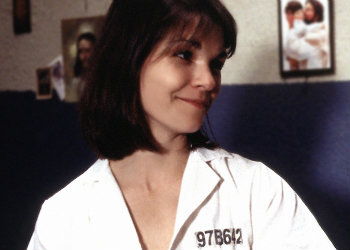 "All I wanted was for someone to pay attention and now that they finally are, I see that my life then, or now, isn't worth shit."
Played By: Kathryn Erbe
Prisoner 97B642. Convicted December 6, 1997 - Murder in the first degree. Sentence: Death. Sentence commuted in 1999, then commutation of sentence revoked in 2000.

The first and only woman to be incarcerated at Oswald. She was sentenced to die for murdering her daughter; she drove her car into a lake with her daughter in the back seat, then swam out as the car sank, leaving her daughter to drown. She swears it was an accident, but that it nevertheless "had to happen".

While she keeps mostly to herself and has a shy, charming demeanor, she shows some signs of psychological instability; shortly after her arrival, she exposes herself to fellow prisoner Timmy Kirk and prostitutes herself to inmates and guards alike in return for preferential treatment. She believes she is doing God's will, and it is suggested that she is a devout Christian. 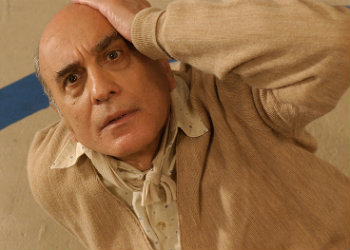 The oldest inmate on the show and a prominent member of "The Others", the group in Oz which generally stays away from trouble and gang related warfare. His age as well as experience in Oz makes his interactions with several other inmates dynamic; some see him as a mentor, others a survivor, and a few a vulnerable old man. 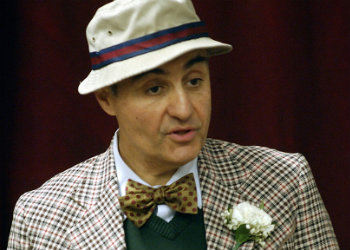 A bank burglar who tries numerous times to escape OZ and strikes up a friendship with Rebadow.

A quiet and thoughtful Russian inmate, who previously worked as a hitman. 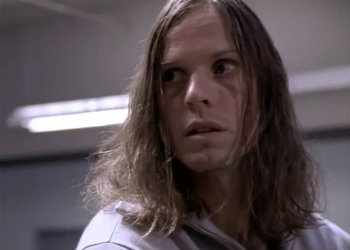 A quiet young inmate sent to OZ for killing and eating his parents. He possesses all the qualities that would normally make him a target of stronger inmates, but the disturbing nature of his crime combined with a creepy, solitary demeanor means he's left alone by others.

An African American police detective, he is an undercover narcotics officer working under the false identity of Desmond Mobay and trying to bust the drug trade in Oz. "Mobay" is a Jamaican who wishes to work for the gangsters within Oz.

Played By: Tom Ligon
Prisoner 01Y218. Convicted January 20, 2001 for aggravated assault of a minor. Sentence of 12 years, up for parole in seven.

A middle-aged former sheriff sent to OZ for assaulting a suspect.

A Death Row racist who killed his entire family. Twice.

A remorseless Death Row inmate who reveals himself to be a Serial Killer.

A clever and cunning Russian Jew.

A French inmate arrested for destroying a statue at an art museum, he is woefully unprepared for prison life.

Played By: Joel Grey
Prisoner number 03I462, Lemuel Idzik. Convicted February 2, 2003 - Murder in the second degree. Sentence: Life imprisonment without the possibility of parole. Later convicted of an additional murder; he was sentenced to death, but the death sentence was later commuted back to life imprisonment.

A nihilistic old man who believes all of life and existence is worthless. He murders Kareem Said and Omar White, with the intention of getting executed for that.

Prisoner number 01J813, Jia Kenmin. Convicted February 2, 2001 - Possession and distribution of a controlled substance. Sentence: 15 years, up for parole in 5.

A minor-league baseball player who gets involved with one of O'Reily's schemes.

Lionel Kelsch
Played by: Tony Hoyt
A prisoner hired as a hitman by the governor in the final episodes. At first he just provides a distraction for another man to kill Loewen then he gets paid to kill more people himself to cover that up.
Greg Penders
Player by: John Lurie
"Prisoner number 97P528, Greg Penders. Convicted May 7, 1997 - Criminally negligent homicide. Sentence: 17 years, up for parole in 9."
An unaffiliated prisoner doing time for criminally negligent homicide.
Ralph Galino
‘’’Pkayed By:’’’ Domenick Lombardozzi
A building contractor sent too Oz after one of his buildings collapsed killing several people.
William Giles
‘’Played by Austin Pendleton (old) and Danny Downey (young)
"Prisoner number 58G714, William Giles. Convicted February 6, 1958 - Second degree murder. Sentenced to life. Up for parole in 60 years."An older prisoner with a mysterious connection to Sister Pete.
Henry Stanton
Played by: Tomas G. Waites
A hot head inmate who briefly befriends Cyril.
Colonel Edward Galson
Played By: John Doman
A military officer sent to Oz for rape.
Adam Guenzel
Played By: Mike Doyle
A rapist and former friend of Beecher.