Base of Operations: Unknown 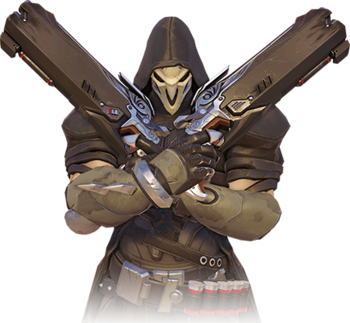 Reaper is a black-robed terrorist of unknown origin. His identity and motives are a mystery, but he serves as one of the deadliest mercenaries on Earth. Ruthless, he's fought in many battles and wars over the past decades, showing no allegiance or cause.

Survivors have described a black shadow ghosting unscathed through the most hellish battlefields. The few bodies recovered of those he kills are pale, empty husks drained of life, their cells showing signs of intense degradation. It is possible that he is a byproduct of failed genetic alteration which forces his cells to simultaneously decay and regenerate at a hyper-accelerated rate.

Those attempting to track his movements have begun to see a pattern in his appearances. They believe that Reaper is hunting former Overwatch agents and systematically eliminating them.

In truth, however, Reaper's identity is in fact the former vice-leader of Overwatch (and head of its Blackwatch division), Gabriel Reyes. A ruthless soldier who would do anything to get the mission done, he was given leadership of Overwatch during the Omnic Crisis, where he helped lead mankind's fight against the Omnics. When the war was over, he was happy to let his friend Jack be the public face (and ultimately responsible one)

while he ran the covert ops team. Over time, Reyes became responsible for several incidents that caused people to severely lose trust in Overwatch, and he and Jack eventually came to blows at Overwatch's Swiss HQ. The ensuing battle eventually triggered an explosion that seemingly killed both of them and caused the dissolution of Overwatch. However, something had happened to him after the explosion; his body became an empty but quickly regenerating husk, making every second of his new life painful. He eventually came to relish his evil ways and took the identity of "Reaper", spreading terror in cahoots with the Talon organization and trying to make sure the world will finally recognize his deeds.

Reaper is built for ambushing enemies and quickly bursting them down from up close.
Soldier: 76 - United States

Age: Mid-to-late 50snote His exact age is never given, but the narration

in Junkenstein's Revenge mentions that he's two decades older than The Gunslinger (McCree) and The Archer (Hanzo).

Base of Operations: Unknownnote Currently residing in Necropolis, Egypt 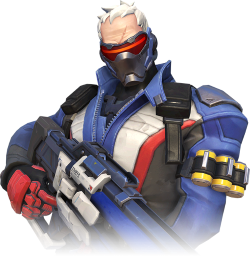 Currently the target of an international manhunt, the vigilante known as Soldier: 76 wages a personal war to expose the truth behind Overwatch's collapse.

Soldier: 76 revealed himself in a string of attacks that crisscrossed the globe, targeting financial institutions, shadowy corporations, and secure Overwatch facilities. Though to the outside world his motives are inscrutable, there are those who claim that he is a former Overwatch agent, determined to shed light on the conspiracy that brought down the organization.

While his true identity remains a mystery, he is believed to have been trained as a member of the American "soldier enhancement program." He possesses physical capabilities exceeding those of a conventional soldier's, as well as other augmentations that make him a peerless combatant. In addition, he utilizes a cutting-edge arsenal, much of it stolen in raids on Overwatch installations.

Unrelenting in his search to find those responsible for Overwatch's fall, Soldier: 76 will stop at nothing to bring them to justice.

His identity is in fact the celebrated Overwatch hero and leader Jack Morrison. Formerly just a mere farmer's son from Indiana, Jack joined the military at the age of 18, eventually undergoing a "super soldier enhancement" program alongside his best friend Gabriel Reyes. When the first Omnic Crisis struck, Jack and Gabriel were among the first inductees into the newly formed Overwatch. Jack's kind nature, idealism, and charisma led him to become the main face of Overwatch and its first official commander. Eventually, the Overwatch he helped build started to show signs of corruption, and people began to lose their trust in the organization, regardless of how hard Jack tried to quell their doubts. It all fell apart when Jack and Gabriel came to blows at Overwatch's Swiss HQ; in the ensuing battle, Jack was believed to have perished along with Gabriel when their fighting triggered an explosion that destroyed the facility, and Morrison was officially buried with honors after his apparent death. However, unknown to the public, Jack survived the destruction. Disillusioned with how his idealism got him nowhere in preventing the world from plummeting into darkness and was in fact used to corrupt the organization he protected and cost him some of his dearest friends, he no longer believes in those old ideals, deciding instead to try to focus only on what matters most to him: uncovering the truth behind Overwatch's fall, no matter the cost, how many rules he has to break, and what brutal methods he has to use. After completing various raids to steal cutting-edge technology, including a prototype pulse rifle from a former Overwatch base, he began undertaking vigilante missions, referring to himself only as "Soldier: 76."

Base of Operations: Castillo, Mexico

Appearances (short stories): "What You Left Behind" (cameo) 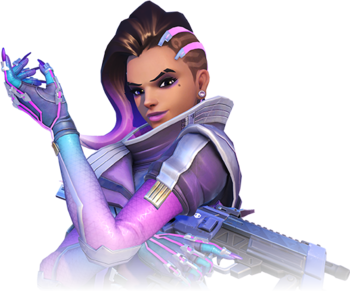 One of the world's most notorious hackers, Sombra uses her skills to manipulate those with power to get what she wants.

Olivia Colomar was just one of hundreds of children orphaned by the Omnic Crisis. In order to survive in the world, she learned how to hack and manipulate people to get what she wants. She eventually joined Los Muertos on their rebellion against the government. After a while, she thought she was at the top of the world until she discovered a conspiracy that has spread out globally — and the conspiracy noticed her. Knowing that she was in danger, she erased all traces of her existence and re-emerged into the world as the woman named Sombra.

With her new identity, she launched a wide-spread string of hacks in order to figure out the truth about the conspiracy, which led her to be noticed by many people, including those within the ranks of Talon. She eventually joined Talon, and has assisted them on multiple attacks against organizations with ties to the government. But in reality, she is using Talon as a way to help her get what she wants.

Base of Operations: Utopaea, India 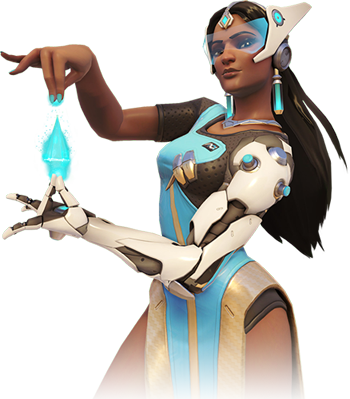 Symmetra literally bends reality. By manipulating hard-light constructs, she crafts the world as she wishes it to be, in hopes of engineering a perfect society.

Following the Omnic Crisis, the Vishkar Corporation of southern India began the laborious process of creating new, self-sustaining cities to house the nation's displaced population. One such city, Utopaea, was created using radical hard-light technology that enabled its architects to shape the city's streets, utilities, and living spaces in the blink of an eye.

After she was identified as one of the few capable of becoming a light-bending architect, young Satya Vaswani was plucked from extreme poverty and placed in the care of Vishkar's architect academy, never to return home. Isolated and lonely in her new life, Satya immersed herself in her education and training. She quickly grasped the applications of the technology and was one of the top students in her class. Satya approached hard-light manipulation differently from her peers, with their more procedural, mechanical constructions, instead weaving her constructs in the motions of the traditional dance of her homeland.

Though she was one of Utopaea's top architects, the Vishkar Corporation saw far greater potential in Satya's abilities. Giving her the moniker "Symmetra," Vishkar sent her on clandestine missions around the world to uphold its corporate interests and expand its influence into other countries.

Symmetra believes her actions serve the greater good in society. But there are times when she wonders whether the control and order she desires are truly best for humanity.

Symmetra is a Damage character (formerly a support character) who can lock down choke points with sentries, shields, and projectile spam, as well as assist her team's positioning via teleportation.

Symmetra has had two major reworks as of June 2018. Prior to her second rework in June 2018, Photon Projector would lock on to targets, she could place up to six turrets, but only in close range (and could still only deploy three turrets in one sitting before having to recharge), her Photon Barrier was a normal ability that fired an automatically-advancing shield, and two placed ultimates: a Teleporter that connected between her current location and her team's spawn, and a Shield Generator that would grant passive shields to all allies within range. Prior to her first rework in December 2016, she only had Teleporter as an ultimate, and instead of Photon Barrier, she had Photon Shield, which placed a small, flat amount of regenerating shield around an ally, lasting until they died.
"Reality is my playground."