This page is for the characters from the 2005 film adaptation.

Note: For the page about the characters from the CGI series which differs from the manga and feature film counterparts, see this page.

open/close all folders
The Goats 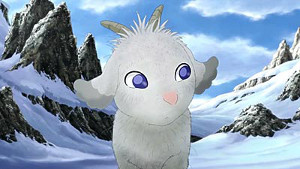 Mei the Goat.
Voiced By Hiroki Narimiya
A goat from the Sawasawa Mountains. While the gender is unmentioned in the original books, Mei is depicted as a male goat in the film.

Voiced By Shōzō Hayashiya IX
An overweight goat who acts as a brother figure to Mei.

Voiced By Maya Kobayashi
A pink-colored goat and a friend of Mei.

Voiced By Eiji Bandō
The leader of the goats of the Sawasawa Mountains.

Voiced By Etsuko Ichihara
She raised Mei after his mother was killed by wolves, and is later shocked when Mei befriends Gabu.

Attempted to save Mei from a group of wolves when he was a child, managing to bite off Giro's ear before being eaten. Though she is mentioned, she does not physically appear in the book series.
Advertisement:
The Wolves 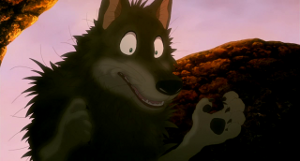 Gabu the Wolf.
Voiced by Shidō Nakamura II
A wolf from the Bakubaku Valley. Despite being a competent, dangerous predator, Gabu is more of an affable, anxious goof. This made him a misfit among his rough, tough, and mean packmates. One night in an abandoned barn, he becomes best friends with Mei the goat, which draws further ire from his pack, thinking he's turned traitor.

Voiced By Riki Takeuchi
The boss of the Bakubaku Valley wolves and a friend of Gabu's father.

Voiced By Tetsuya Yanagihara and Yoshiyuki Hirai
A pair of twin wolves.

Voiced By Yū Hayami
Only seen briefly in Gabu's flashback.