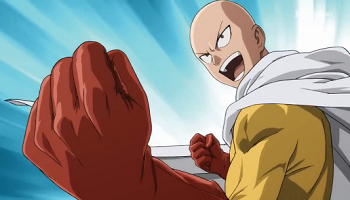 Once an ordinary unemployed salaryman, Saitama was inspired to become a hero when he incidentally saved a butt-chinned boy from a crab monster with nothing but his necktie. He then underwent an intensely unhealthy training regimen for three years, increasing his strength exponentially - he got so powerful, in fact, that he lost all his hair. Now he's so strong that, no matter the opponent, he can defeat them with a single punch. Because of this, he's grown bored with his life of super-heroism.

What Saitama doesn't know is that the butt-chinned boy he saved all those years ago was the grandson of a multi-millionaire, who founded the Hero Association when he found out about the incident.

Genos was an ordinary young man until a "mad cyborg" destroyed his hometown and killed everyone he loved. He was mortally wounded, but the kind scientist Dr. Kuseno saved his life and rebuilt his body. Now a cyborg himself, Genos once set out on a journey to find the "mad cyborg" and avenge his family, but after meeting Saitama chooses to settle down with him in hopes of becoming more powerful. Whereas Saitama has raw, undeniable strength, Genos has everything else. That is, looks, intelligence, dedication, money, style, and appeal.