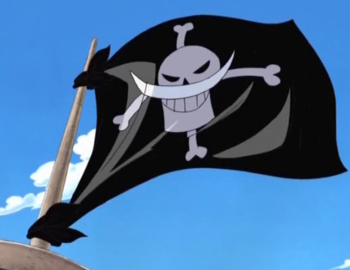 The former pirate crew of Edward Newgate, also known as Whitebeard, one of the Four Emperors, and one of the most powerful pirate crews in the world and once viewed as the Roger Pirates' rivals back when they were around and their captain Gol D. Roger was alive. They consider themselves to be a great family united under Whitebeard as their surrogate father. The crew consists of more than 1,600 strong, and is divided into sixteen divisions, each led by one of Whitebeard's powerful division commanders, and they're allied with many notorious pirates crew, some of which used to be part of the Whitebeard Pirates. Under Whitebeard's benevolent leadership, the Whitebeard Pirates are actually a stabilizing force in the New World as they have many islands under their protection from the World Government and the other Emperors.

Following the capture of Ace, the second division captain, and the announcement of his execution, the Whitebeard Pirates and their allies engage a war at Marineford against the Marine to rescue Ace, resulting in the Paramount War. By the end of said war, Ace and Newgate are killed and the Whitebeard Pirates have lost and only Shank's timely intervention saves the others from certain death. During the two years time-skip, with crew left without a central leader, the remnants are led by Marco The Phoenix, formerly the captain of the first divsion, but are defeated by the Blackbeard Pirates in a war to avenge Whitebeard. Their former territories have been conquered by the other emperors, most of which from Blackbeard himself, and they are now a shadow of their former glory with the Warlord and Whitebeard's self-proclaimed son Edward Weevil hunting them down.

"It's Ace's last wish!! We have to protect him for Ace!! If you let him die, you'll bring shame to the Whitebeard Pirates!!"
—Chapter 575

The commander of the First Division of the crew and arguably Whitebeard's right-hand man, Marco is first seen when one of Shanks' subordinates delivers a message to Whitebeard, and then later when Shanks himself visits their ship, the Moby Dick. Marco is depicted as a patient, mild-mannered man, but this belies his unfailing devotion to his captain and crew. In the past, he helped Ace get acclimated to the Whitebeard Pirates when he was first brought on board.

Marco has eaten the Bird-Bird Fruit (Tori Tori no Mi), Model: Phoenix, a Zoan-class fruit of the Mythical sub-type that allows him to transform into a phoenix of blue flames, allowing him to regenerate from most injuries, as well granting him the ability of flight. His short skirmishes with the three Marine Admirals during the battle of Marineford indicate his great strength.

He participates in the Paramount War, where he clashes with all of the three Admirals, albeit briefly. After Ace and Whitebeard die, he helps protect Luffy from Marine forces.

After Whitebeard's death, he becomes the new captain, but his campaign against Blackbeard to avenge the former captain ends with a crushing defeat and the dissolution of the Whitebeard Pirates. Since then, he's been working as a doctor in Whitebeard's home village.

"The name of this era is 'Whitebeard'!"

Portgas D. Ace is Luffy's older brother by way of adoption, and the Second Division commander of the Whitebeard Pirates, the strongest pirate crew in the world. Like his younger brother, he is a Big Eater and a Heavy Sleeper, but unlike his brother, he is intelligent, polite, and gracious, much to the surprise of the Straw Hats when they first met him. He is somewhat protective of Luffy, and looks forward to meeting him on the high seas as pirates. However, his different family name hints at something else. As it turns out, Portgas D. Rouge was his mother only, and his father was actually Gold Roger. He has eaten the Flame-Flame Fruit (Mera Mera no Mi), allowing him to create, control and transform into fire. 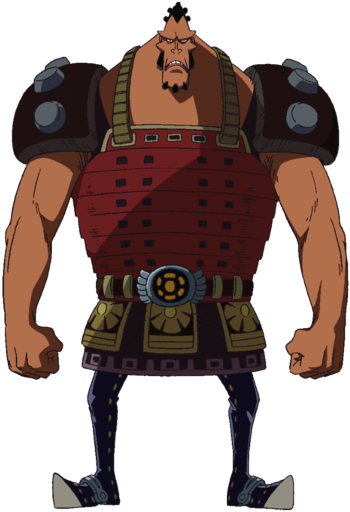 Jozu, the Third Division commander, first makes his appearance when Shanks' subordinate delivers a message to Whitebeard. When Shanks later comes to meet them in person, Jozu comments on his immense Haki, but is shown being unaffected himself. Though he has a stern disposition, he has great devotion towards his crewmates and captain. Jozu has eaten the Twinkle-Twinkle Fruit (Kira Kira no Mi), a Devil Fruit that enables him to turn his entire body into diamond, making him very difficult to hurt. He also possesses immense physical strength, being able to pick up and hurl an entire iceberg towards his adversaries. He's also deceptively fast and agile.

The Fourth Division commander. Killed by Blackbeard before the story started, he was very friendly and sociable, and very close to Ace. As seen during the Summit War, no one took his place as fourth division commander after his death.

He doesn't have any Devil Fruit power and even refuses to eat the Dark-Dark Fruit after he finds it. 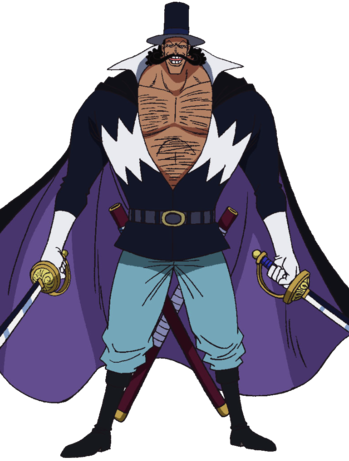 Vista, the Fifth Division Commander, makes his appearance during Ace's flashback, and subsequently during the Marineford arc. Always calm and polite, he doesn't seem to have consumed a Devil Fruit, but is among the most skilled swordsmen in the world, as he was able to engage in a skirmish with Dracule Mihawk during the war and emerge unscathed. 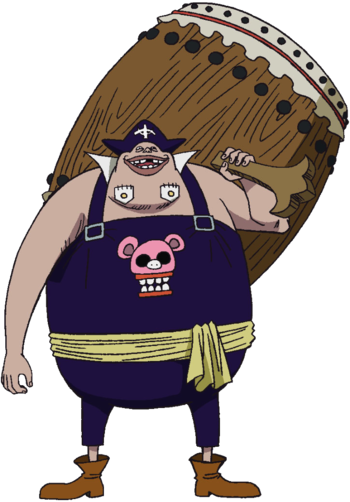 The Sixth Division commander. He has eaten the Pocket-Pocket Fruit, a Devil Fruit who gives him two pockets in his chin where he can store what he wants, like a huge hammer.

He's seen, along with the other commanders of the Whitebeard's pirates, at Marineford to save Ace. 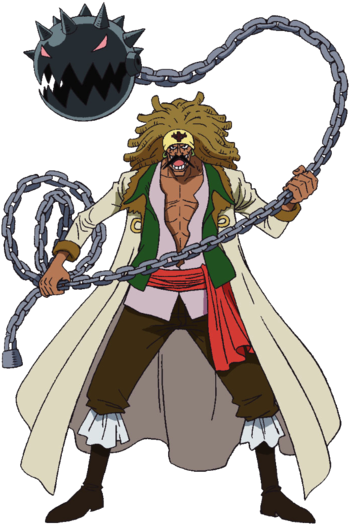 The Seventh Division Commander. He fights using a spiked flail which has a mouth and seems to have a life of its own.

He's seen, along with the other commanders of the Whitebeard's pirates, at Marineford to save Ace. 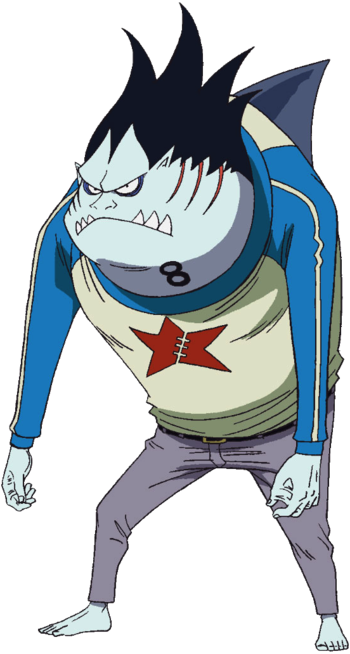 The Eighth Division commander. He's a shark fish-man who doesn't use any weapons. Instead, he fights using hand-to-hand combat and his shark teeth.

Like the other commanders, he participates at the battle of Marineford to rescue Ace. 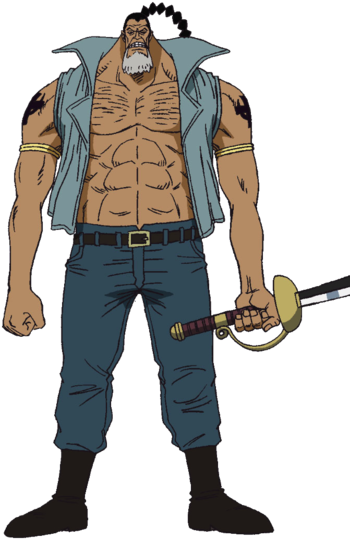 He's seen participating at the battle of Marineford to save Ace, where he fights with a huge sword. Later, he's seen carrying Jozu's frozen body. 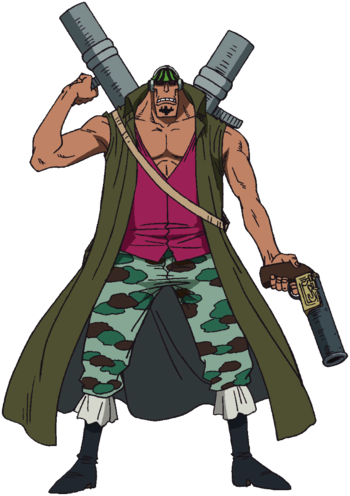 The Tenth Division commander. He specializes in firearms and has two guns and two bazookas, probably to go with his military soldier-motif.

He's participates the battle of Marineford to rescue his fellow division commander Ace, where he fights Gecko Moria and Akainu. The latter makes a quick job of him, but Curiel's crewmates rescue him. 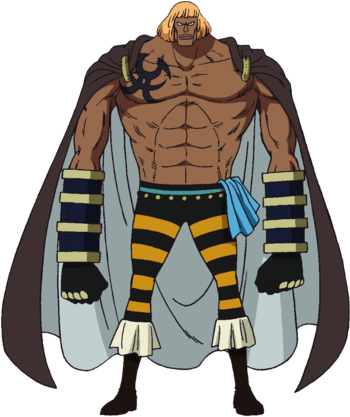 The Eleventh Division commander. He wields a large pair of gauntlets, which implies he fights with his fists.

He participates in the Summit War to save Ace, his fellow crewmember. 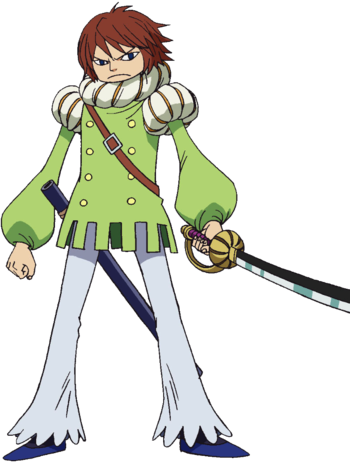 The Twelfth Division commander. He wields a saber that goes with his 16th century style outfit.

He's seen at the battle in Marineford along with the other division commanders. 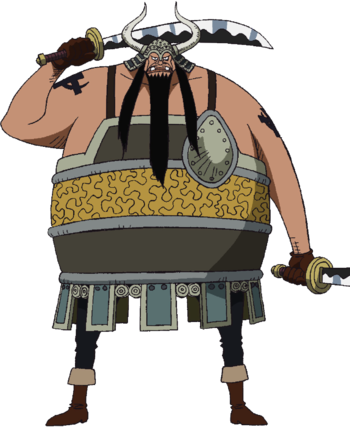 He and his fellow division commanders participate in the battle at Marineford to save Ace. However, he is controlled by Doflamingo, who forces him to attack his own allies until he's finally freed from the Warlord's power. 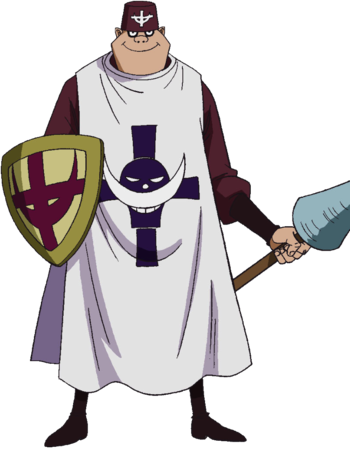 The Fourteenth Division commander. His appearance is knight-like and, fittingly, he wields a jousting lance and a shield.

Like all the division commanders, he takes place at the Summit War, where he easily defeats many Marines. 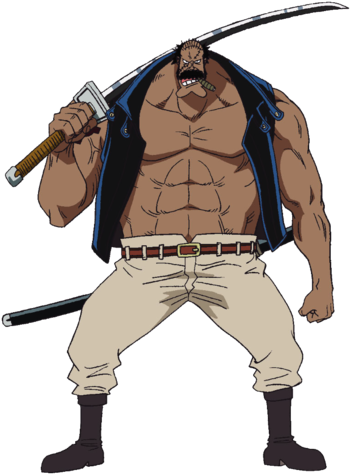 The Fifteenth Division commander. He wields a katana that can become a flaming weapon.

He's seen at the Summit War along with the other division commanders.

The Sixteenth Division commander. He comes from the Wano region, where he used to be one of Oden's retainers, and is Kiku's older brother. He fights using two flintock pistols but, at the end of Marineford's arc, he's seen with a sword, implying he has some degree in swordsmanship.

He participates in the Summit War with the other division commanders.

Kozuki Oden, His Family, and Retainers
The first Second Division commander, and the former daimyo of Kuri who joined Whitebeard during his stay at Wano. He was accompanied by his retainers Dogstorm and Cat Viper, and met his wife Toki during this time, who bore him his children Momonosuke and Hiyori. Later left with Whitebeard's blessing to join the Roger Pirates and aid them in their journey to Laugh Tale.
For Oden click here.
For the rest of the Kozuki Family click here, .
For Dogstorm and Cat Viper, click here.
The Medical Team

Hello nurses!
"Captain, please stop drinking so..."
Whitebeard: "Be quiet! I drink if I want to drink, how's that bad for my health?"

The nurses of the crew and the only female members. They take care of Whitebeard's declining health, even if the latter keeps drinking, ignoring their protests.

Due to Whitebeard's own set of morals, despite their protests, they are left in a safe place and not allowed to take part in the Summit War. 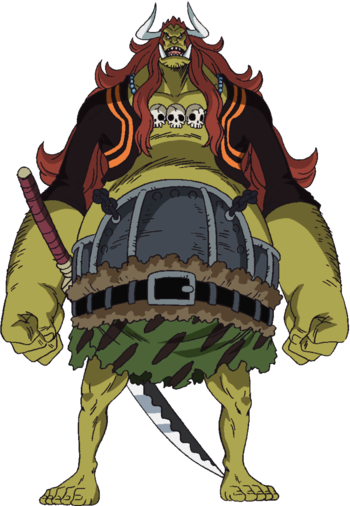 One of Whitebeard's allied captains and a descendant of Oars. In contrast to his ancestor's fame, he's a kind person who even appreciates simple gifts like a hand made hat (though proportionate to his size). He's very loyal and a close friend of Ace, to the point that he's one of the first captains at Marineford to rush forward in an attempt to save him, but is quickly stopped by the attacks of Kuma, Doflamingo and Moria.

After being mauled by the Warlords, he collapses to the ground and his heavy body prevents the Marines from raising the section of the plaza. After a while, he recovers his senses and moves the last of Whitebeard's ship but is later taken down by cannon fire. 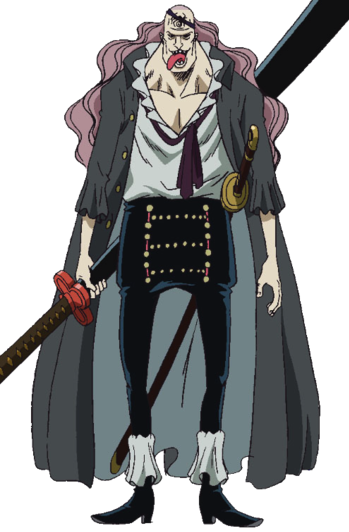 One of the pirate captains allied with Whitebeard, he comes to Marineford with his crew to save Ace. However after he finds out that Ace is the son of Gold Roger, the man who massacred his old crew, and after some manipulation from Akainu he turns on Whitebeard and stabs him, calling him out on selling his allies. Whitebeard, however, proves him wrong and forgives him. After the war, his whereabouts are unknown. 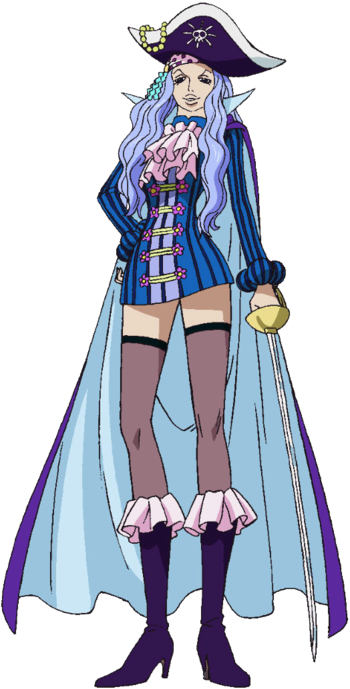 A former crew member of Whitebeard that left for unknown reasons and started her own pirate crew. She and her crew remain subservient and loyal to Whitebeard. She took part in the battle of Marineford and proved instrumental in pressing the assault forward. Since the war ended she as not been seen and her current whereabouts are unknown. An anime only news report mentions her being defeated by Edward Weevil.

When King tries to use his sword, Izo shoots it off his hand.

When King tries to use his sword, Izo shoots it off his hand.