All spoilers regarding the Super Rookies era are unmarked. New World spoilers are unmarked in character descriptions, and examples relating to the New World era can be spoiler-tagged if deemed necessary. Spoilers in the Orochi's Spy and Yamato entries are also unmarked. 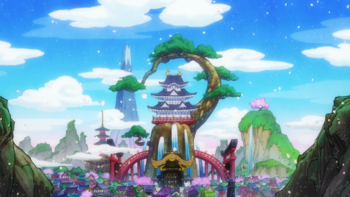 Be-Beng!!
"Samurai is the title of the swordsmen from the land of Wano. Wano is a nation with closed borders. No outsiders are allowed within. They aren't even affiliated with the World Government. And these samurai are so powerful... that even the Navy does not dare breach their territory."
—Brook (Chapter 655)

The Land of Wano is a powerful, isolated country in the New World that is not affiliated with the World Government. It is based on feudal Japan and is renowned for its isolationism, and being inhabited by powerful samurai. The land was previously ruled by the Kozuki Family, until Kaido conspired with the family's usurper, Shogun Kurozumi Orochi, to overthrow their rule 20 years before the beginning of the story. It remains ruled by Orochi in allegiance with Kaido's faction, its citizens enslaved to work in factories building weapons which are then transported to Dressrosa ruled by Kaido's ally, the Warlord Doflamingo, and distributed in the Black Market in exchange for the SMILE Fruits.

The feudal family which used to rule the country until Kaido's assault twenty years before the Wano Arc. See their page here.
Advertisement:

Originally one of Wano's six ruling families, it lost this position after a failed attempt to usurp the shogun's throne. Orochi eventually usurps the Kozuki Clan twenty years before the Wano arc with the aid of Kaido. 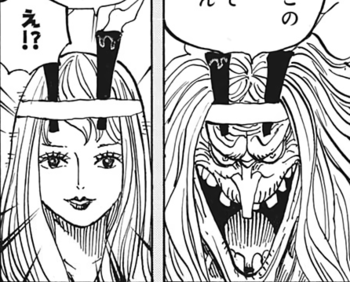 An old woman who set Kurozumi Orochi on his path toward the throne of Shogun. She was also the previous user of Mr 2's Clone-Clone Fruit (Mane Mane no Mi). 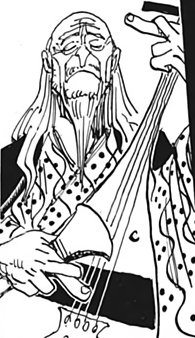 "There is nothing to worry about, Master Orochi... Have faith in the Barrier-Barrier arts..."
—Chapter 968

A member of the Kurozumi Family, Semimaru was an extremely old, blind biwa player who dressed as a monk and protected Orochi with his powers. Was the previous owner of the Barrier-Barrier Fruit (Bari Bari no Mi). 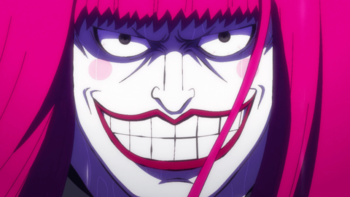 "Ever since I completely lost my will to go on as a child, I've been searching for my place to die. The man you thought I was never existed!!"
—Chapter 974

The real identity of the Samurai known as Kanjuro. The offspring of two Kabuki theatre actors, he witnessed his family getting slaughtered on-stage because of their connection to the clan of daimyo-killers, the Kurozumi. After Orochi dispatched his and his family's persecutors, Kanjuro pledged loyalty to his relative and now shogun of Wano, being instructed to infiltrate the Kozuki Clan by posing as a loyal retainer and then feed Orochi with continuous information. He is also revealed to be a good artist. 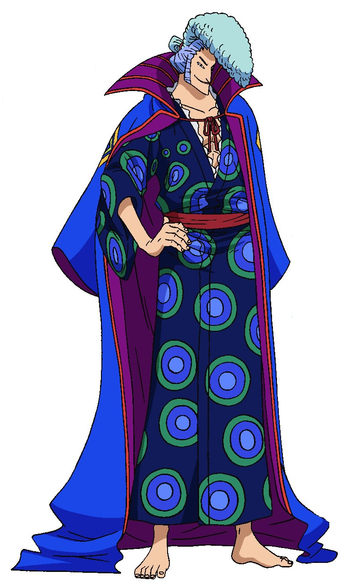 A money changer for the Kurozumi Family and leader of the Kyoshiro Family, a Yakuza group in the Flower Capital. He's also Orochi's closest and most competent ally. 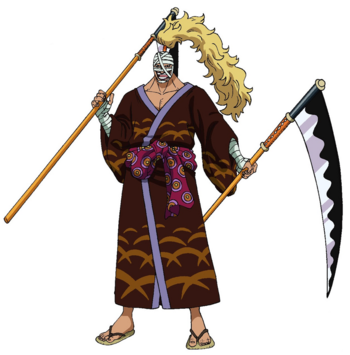 A scythe-wielding Ronin who prowls the Land of Wano, murdering people with impunity. He's actually revealed to work as a hitman for Orochi. His past has personal ties to the Kid Pirates. 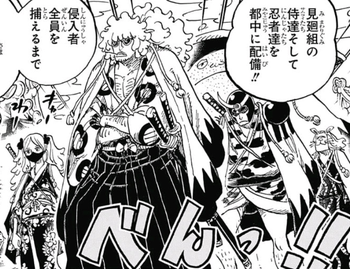 A special squad of samurai tasked with patrolling the Flower Capital after the city is placed on high alert. They later take part in the shogun's procession to Onigashima. 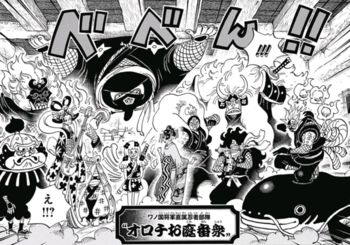 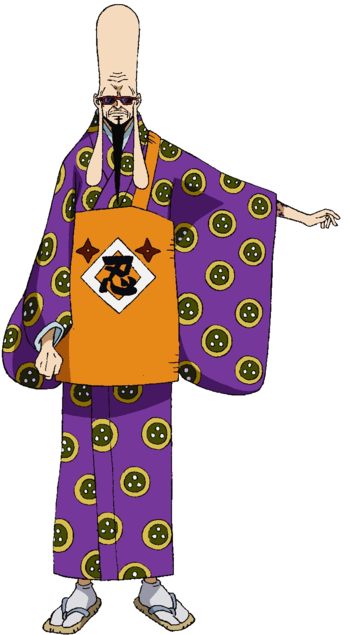 "The truth will only cause confusion"
—Chapter 972

The captain of the Oniwabanshu. A stoic man loyal to shogun Orochi and sometimes assists him with the handling of the enemies or the delivery of informations.

Fukurokuju is extremely loyal to Orochi and claims that the Oniwabanshu should always follow the current Shogun, regardless of who he is or how he gained the title. 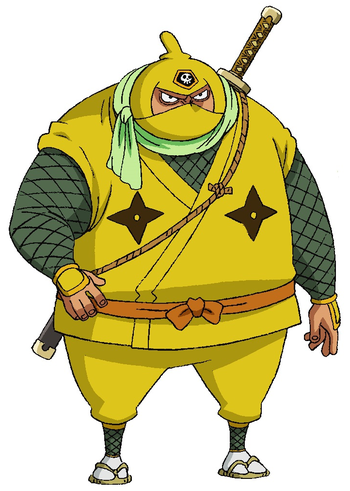 One of Orochi's Oniwabanshu. He's able to crawl on the ceiling and uses rope to catch the intruders. 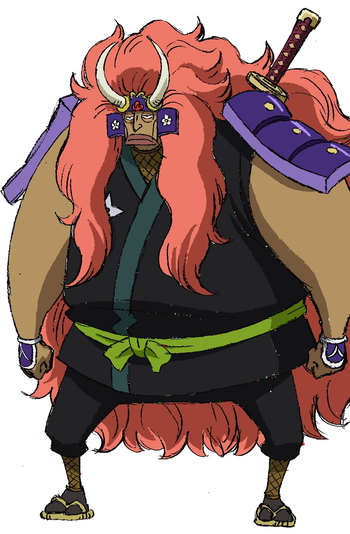 One of Orochi's Oniwabanshu. He's a large man wearing samurai armor and a katana.

One of Orochi's Oniwabanshu. She's a short girl with long hair and a sword across her back.

One of Orochi's Oniwabanshu. She's a tall, well-groomed woman carrying a lute which conceals a gun. 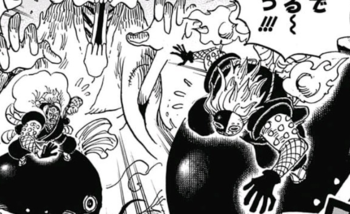 Two of Orochi's Oniwabanshu. They seemingly work in tandem and ride large, earthbound catfish. Fuujin wears a helmet and carries a billowing bag over his shoulders, Raijin wears a metal mask and a ring with some fiery balls embedded in it. 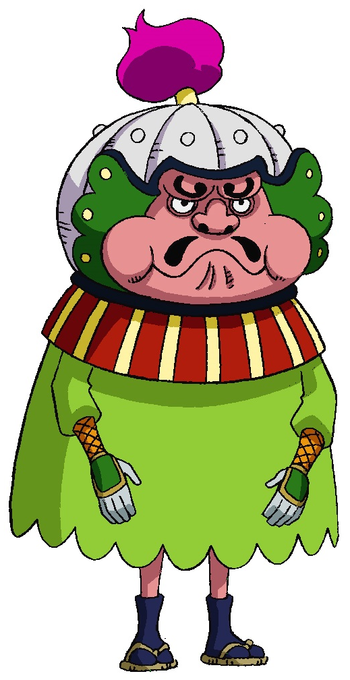 One of Orochi's Oniwabanshu, a small and plump ninja wearing a round helmet, an odd smile and costantly swollen cheeks. 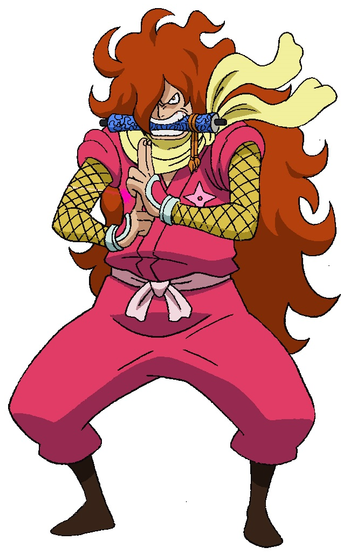 One of Orochi's Oniwabanshu, a frowning man with long wild hair and typical ninja garments.

One of Orochi's Oniwabanshu, a short man with a coif-covered face hidden under a massive straw mat.

One of Orochi's Oniwabanshu, a huge man with a mane of wild hair and a purple scowling mask resembling an ape. 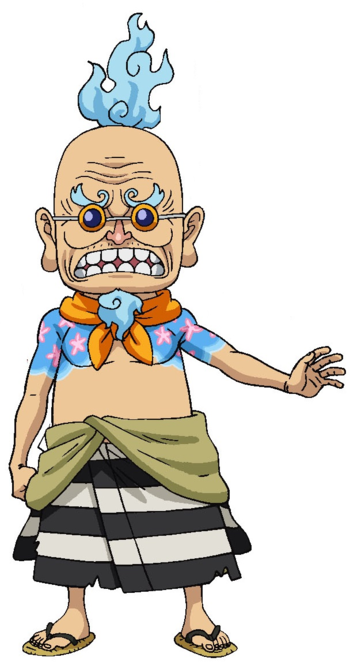 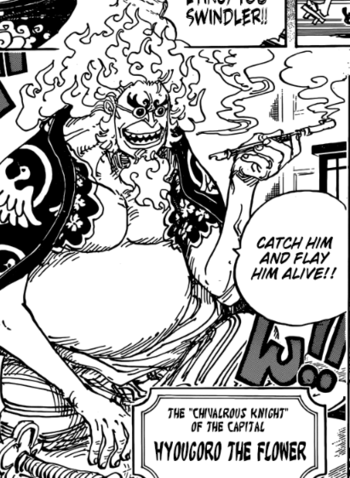 "Ha ha... Let me tell you, Oden, there are times I think about what would have happened if I'd challenged Kaido with you, back at the peak of my strength! But just look at what your followers have done. They've pulled off this raid in your name!! And I too have gained a most fascinating apprentice!! I have no doubt that dawn will come to Wano!!!"
—Chapter 1006

The yakuza boss of the Flower Capital and the most powerful one in Wano, as well as an ally to the Kozuki Clan. After Orochi takes over and Oden is killed, Hyogoro gets imprisoned. Twenty years later, Hyogoro is a frail old man who receives help from Luffy and, in exchange, trains him how to master Ryuo. Once freed, Hyogoro regains his title as Yakuza boss and commands the samurai during the assault at Onigashima.

Hyogoro is a wise and old men who, after twenty years, is still beloved by the population. He's also a master of armament Haki and, even if his body has gotten weaker, is still able to fight. 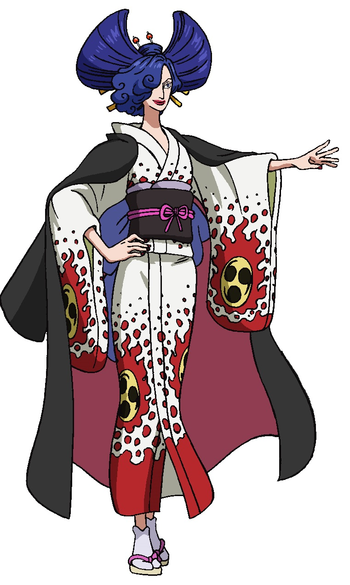 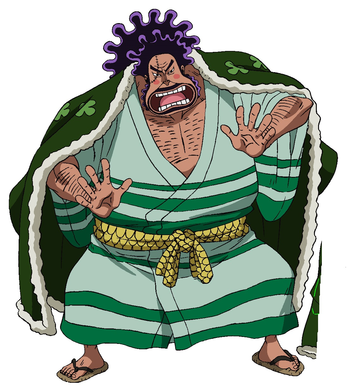 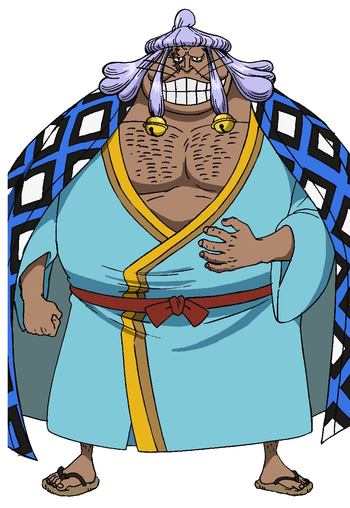 The other four leaders of the Yakuza in the Land of Wano along with Hyogoro, each of them is in charge of a specific region (Ringo, Kibi, Udon and Hakumai). They command a vast number of underlings and are fiercely loyal to Hyogoro. They are "Blood Letter" Oomasa, "Broken Hat" Tsunagoro, "Moon-flower" O-Chou and "Snake Eyes" Yatappe.

The capital and most flourishing region of Wano, and the only one not to be in misery since Orochi became shogun. This only extends to the capital itself, since the neighboring towns are in misery just like the other regions. 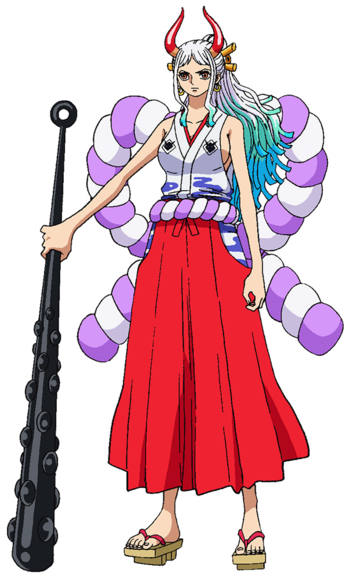 "One day I told my father "I want to be Kozuki Oden" and he clobbered me for it."
-Chapter 984

Kaido's son, introduced for the first time at the party on Onigashima, where he's been missing and Kaido thus orders the Tobi Roppo to find him. Moments later, Yamato rescues Luffy from Ulti's attack.

Yamato is a huge fan of Oden, having read his diary and wishing to adopt the same lifestyle. This not only includes wearing similar clothes and adapting the same fighting style, but also becoming a man (despite being assigned female at birth). Yamato also doesn't share his father's same ruthless and cold lifestyle, as his meeting with Luffy becomes a critical step on his journey to open Wano's borders and join forces with the Straw Hat Pirates.

Yamato has eaten the Dog-Dog Fruit (Inu Inu no Mi), Model: Okuchi-no-Makami, a Mythical Zoan-type Devil Fruit that allows him to transform into a deified version of the extinct Japanese wolf. 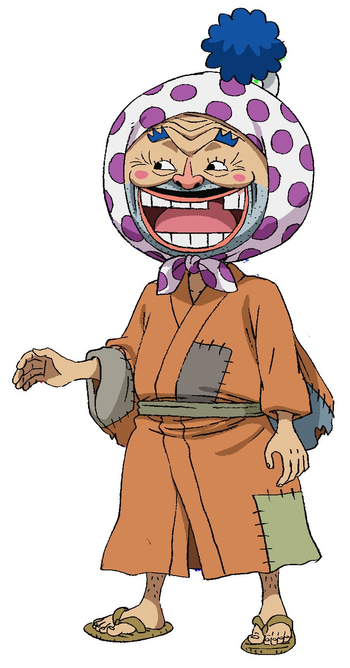 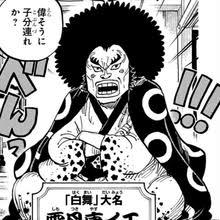 "After all, of the many living things in the world, only a human being has the ability to smile!! Iyo!! So why not waste a good thing? Let those smile ring! Aha ha ha!"

A taikomochi from Ebisu Town outside the Flower Capital beloved by all of its inhabitans because of his niceness. But later turns out that not only is he an ally of the Kozuki clan's rebellion, but he has personal ties to the Kozuki clan. He constantly helps the people of Ebisu Town. 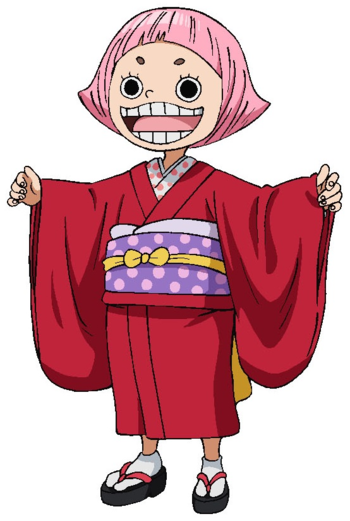 A region located in the western part of Wano. It used to be an abandoned and lawless region populated by the worst criminals of the country, until Oden turned it into a paradise and became the damiyo of the region. After Oden's death, it became a wasteland because of Kaido's factories, which polluted the land and poisoned the rivers. 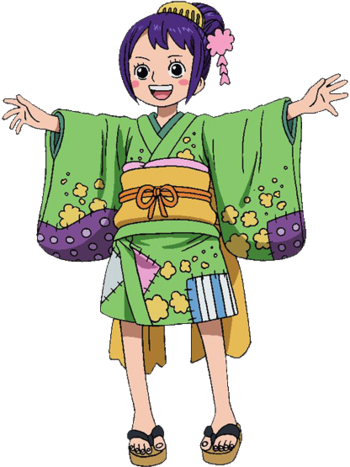 Tama is a girl from the Kuri region in the Land of Wano. She is a kasa weaver (traditional Japanese straw hat), as well as a kunoichi in training who follows the Kozuki Family. Three years before the events of the Wano Arc, she met Ace and his crew when they stayed at her village, and harbors a deep admiration for him. She has eaten the Millet-Millet Fruit (Kibi Kibi no Mi) that allows her to create Dango from her body that she can feed to animals to tame them. 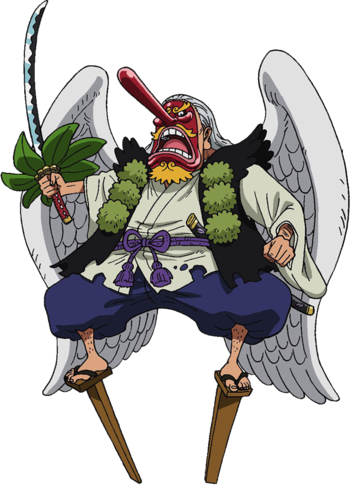 A swordsmith, as well as Tama's friend. He deeply cares for her, and along with Tama, is one of the only two people remaining in their village.

A tea shop owner living in Wano. After Zoro rescues her from some of Kaido's thugs, she repays him by treating Tama's poisoning. There's more to her than what she appears to be. She is the wife of Kin'emon. 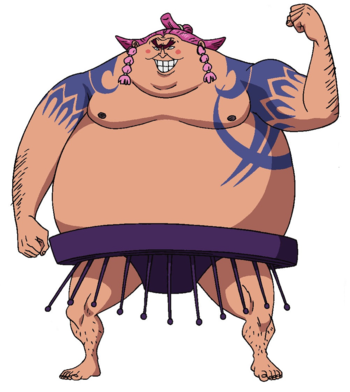 "Silence, commoners! From the perspective of the warrior class, you're ALL chattel!! Whether any of you live or die, is up to ME!"
—Chapter 915

A Sumo Wrestler in Wano and one of the most famous, he's proud of his status and abuses of it at the expenses of those of lower ranks, he also wants to make Kiku his wife despite the latter declining his numerous proposals. Being proud of his fame, he doesn't like being humiliated in front of others, and gets angry when Kiku cuts his topknot.

Luffy challenges him in a sumo match and, despite using dirty tricks, Urashima is easily defeated by Luffy with a single harite and sent flying to Holdem's mansion.

A snowy region, uninhabited with the exception of Gyukimaru. There is the Northern Cemetery, in which the bodies of warriors are preserved (thanks to the cold) along with their swords, including the grave of the legendary warrior Ryuma. 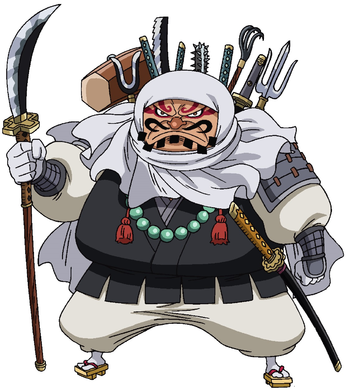 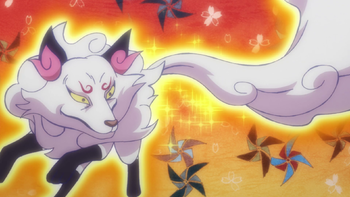 "An opening is the path to victory in a fight to the death!! I strike only when opportunity presents itself!!"
—Chapter 937

A massive warrior monk who carries a lot of weapons on his person he stole from warriors who tried to cross the bridge. Holds a great deal of respect for Ryuuma, claiming he's known as the "sword god".

In the Land of Wano, lives a great variety of creatures. Many of which have a characteristic flame-like mane.

"The ancient scrolls say it's a white boar the size of a mountain!! That's what they call the Mountain God!!"
—Denjiro (Chapter 960)

A boar so gigantic people mistake it for a mountain, which is considered a legendary creature. Forty-one years before the events of the Wano Arc, it rampages through the Flower Capital while looking for its child, destroying a good portion of the city until is stopped by Oden. A few years later, he's seen still alive and tamed by Oden.