The Sweet 3 Generals are the highest-ranking and strongest members of the Big Mom Pirates next to Big Mom, each with incredibly powerful Devil Fruits and extremely high bounties. Due to their skill, power, and reputation, they are Big Mom's Co-Dragons, acting as her seconds-in-command within the crew.

The current roster includes 2nd son Katakuri, 14th daughter Smoothie, and 10th son Cracker. There were originally four Sweet Generals, but the fourth one, 25th son Snack, lost his rank after being defeated by Urouge. 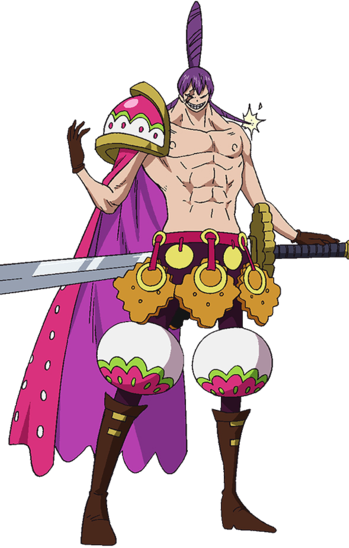 "Learning that there are people out there that no amount of effort can overcome... is what we call true growth!! Stupid boy!!!"
—Chapter 838

The first Sweet General to appear, Cracker is the 10th son of the Charlotte Family and the eldest in a set of triplets, his younger sisters being Custard and Angel. He is Totto Land's Minister of Biscuits and has eaten the Biscuit-Biscuit Fruit (Bisu Bisu no Mi), a Paramecia that allows him to create innumerable biscuits and reshape them in any forms he wishes. He usually inhabits and fights from the inside of an enormous biscuit puppet crafted with his powers, so much so to the point that his bounty poster actually depicts the puppet and not his real face.

Cracker is extremely confident of his abilities and mocks Luffy for even daring to challenge an emperor. However, this overconfidence costs him the fight.

Cracker attacks Luffy and Nami in the Seducing Woods, initially disguised inside his biscuit soldier. However, after a long fight, Cracker is defeated by Luffy and Nami's cooperation. His defeat is what drives the entire army of the Big Mom Pirates to attack Luffy.

The second Sweet General to appear, Smoothie is a human-longleg hybrid, the 14th daughter of the Charlotte Family and the eldest in a set of triplets, her younger sisters being Citron and Cinnamon. She's Totto Land's Minister of Juice, and has eaten the Wring-Wring Fruit (Shibo Shibo no Mi), a Paramecia that allows her to squeeze juice out of any object, as well as absorb the liquid into her body and weapons to increase their size.

Charlotte Snack
The 25th son and formerly of the "Sweet 4 Generals". See his page here