Characters / One Piece: Seven Warlords of the Sea Crews

This page details the crews and organizations commanded by The Seven Warlords of the Sea (former and current), including information about some of the more minor characters within said organizations.
open/close all folders

Crews at the Start of the Story

To see former Warlord Crocodile's crew, look at its own page.

To see former Warlord Gecko Moria's forces, look at its own page.

To see Boa Hancock's crew (and the Kuja warriors) go to this page. 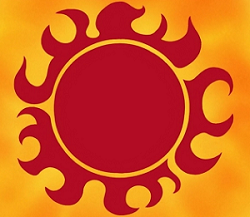 A pirate crew formed by the Fishmen and Mermen slaves Fisher Tiger freed from Mariejoa, as well as others inhabitants from Fish-Man Island swayed by Fisher Tiger's charisma, like the Arlong Pirates and the Macro Pirates. They are exceptionally dangerous as their nature as Fishmen and Mermen mean they can easily swim in the sea to ambush and flee. They also happen to have a signature sun brand designed to erase the Tenryubitoo marks of slavery.

After Tiger died, the original crew broke off and Jimbei assumed leadership of the new Sun Pirates. During the timeskip, they sought protection under Big Mom's flag, but have renounced it after deciding to help out the Straw Hat Pirates against her forces. As of the end of the Whole Cake Island arc, Jimbei has left the crew to join the Straw Hat, leaving the leadership to Aladdin. The last time they were seen, they faced off Big Mom's fleet in a clearly desperate battle and their fate is unknown. 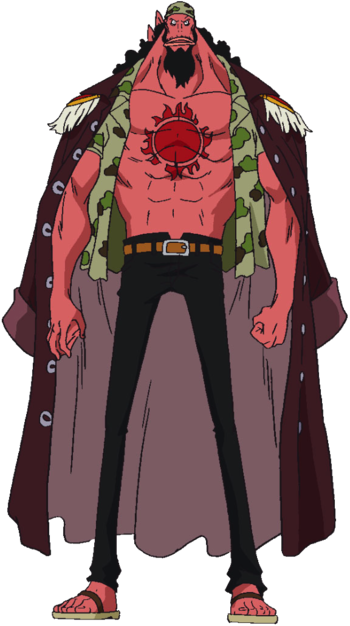 "There are plenty of compassionate humans in this world! I know that! It's foolish to die and leave only hatred as a legacy! I know that! But my reason is overpowered by the demon in my heart! My very flesh refuses their blood! I cannot love humans... ever!!"
—Chapter 623

A legendary Fish-Man and leader of the Sun Pirates. He was known for climbing the Red Line with his bare hands, wreaking havoc on Marijoa and freeing thousands of slaves, both human and fish-man. He later took the fish-men with him and formed the Sun Pirates, a crew composed of former slaves and new fish-men alike. Along with Queen Otohime, he fought for stopping the racism between Fish-Men and humans with his own "methods," but bled to death because he refused a transfusion of human blood. He was also revealed to be a Tai Snapper (a.k.a. Red Sea Bream) fish-man.

His first and only bounty was 230,000,000 berries. He still holds the record for the highest starting bounty revealed thus far. 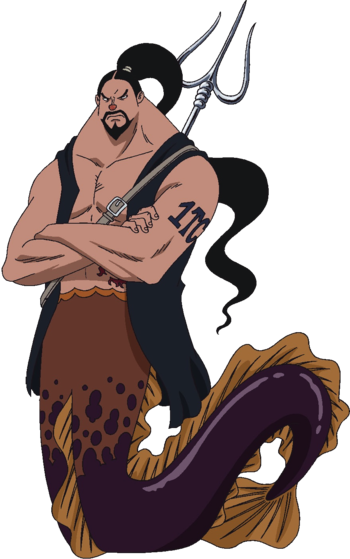 One of the Mermen slaves Fisher Tiger freed from Mariejois. He is the ship's doctor and first mate of the Sun Pirates, under Jimbei. Currently married to Charlotte Praline, one of Big Mom's daughters, which allowed the Sun Pirates to become subordinate to the Emperor. 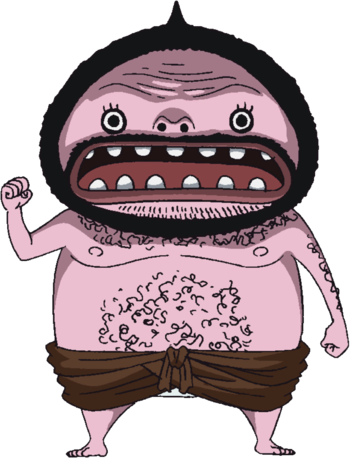 A tiger blowfish fish-man of gigantic proportions. He has a very childish personality and is naive and guillible, as shown when Zeo deceives him. Despite being (initially) a member of the nasty Flying Pirates, he's kind and gentle, as he feels really sorry when, with his clumsiness, he accidentally destroys two towns. Due to his enormous size, he's very strong, and can inflate himself to become even bigger.

In his debut, he's a member of the Flying Pirates, led by Vander Decken IX. After being betrayed by his captain, he loses the will to fight, until Zeo convinces him to fight and take an energy steroid. After defeating Surume, he's taken down by Sanji and Jimbei, and exiled from Fish-Man Island.

In Jimbei's mini-adventures, the former Warlord meets Wadatsumi and helps him apologize to the inhabitants of the towns he destroyed.

During Whole Cake Island's arc, he's seen as a member of the Sun Pirates. 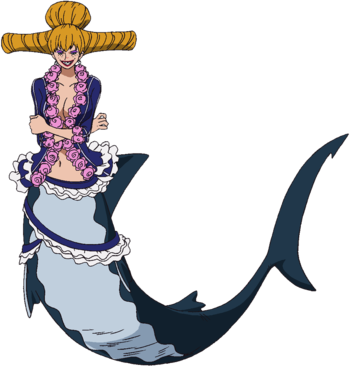 "My oh my, shouldn't you boys be a bit more worried about lil' ol' me? Shashasha!"

The 21st daughter of the Charlotte Family, a human-hammerhead shark mermaid hybrid and the youngest in a set of twins, her older sister being Prim. Praline serves as Totto Land's Minister of Design, and was arranged to marry Aladdin, the first mate of the Sun Pirates, to seal an alliance between them and the Big Mom Pirates.

See the crew's own page here.

See their entry on the their own page. 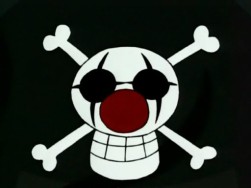 The crew of the (in)famous pirate Buggy the Clown, a Circus themed gang of low-level pirates. The most notable members are Mohji the Tamer & the First Mate, Cabaji the Acrobat & Second Mate, and Richie, a huge lion who serves as Moji's pet. Later, Alvida joins the crew. Although powerful, for an East Blue crew, they are in reality nowhere near as strong as they are feared.

After the Marineford War and Buggy's evasion from Impel then ascension to the rank of Warlord, the crew now hosts several powerful criminals from Impel Down who were freed by Buggy. Furthermore, they now operate a successful underworld mercenary business known as Buggy Delivery.

Buggy "the Star Clown"
See his in entry here.
Mohji "the Beast Tamer"

"I'm telling you, there is no animal in this world that won't obey me!"
-Chapter 12

Buggy's first mate. He's a self-declared pet tamer and has a giant lion called Richie. He generally doesn't fight much himself and lets Richie do the job.

In the Orange Village arc, he and Richie fight Luffy, but are quickly defeated. During Buggy's disappearance, he challenges Cabaji for the title of captain, but both are accidentally defeated by Richie.

"Captain Buggy, leave those small fish to me. 'Cause I can't help but feel that these days my skills are starting to rust!"
-Chapter 15

Buggy's chief of staff. He's a swordman with an acrobat theme, and fights with multiple weapons.

In the Orange Village arc, he fights Zoro and, despite playing dirty, he's ultimately defeated. During Buggy's disappearance, he fights Mohji for the title of captain but Richie beats them both. 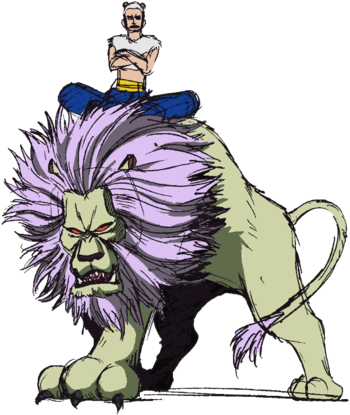 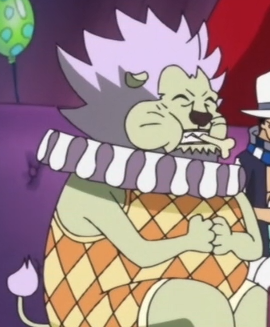 Mohji's giant lion. Despite his intimidating appearance, he acts more like a kitten and tends to think about food most of the time. He's also a bit of a coward, but that's because he's aware of the enemies who are stronger than him.

In his first appearance, he attacks a caged Luffy by Mohji's order but, once Straw Hat is freed, he's quickly defeated.During Buggy's disappearance, he becomes temporarily the new captain, but he and the crew are quickly captured by a cannibal tribe until Buggy comes and saves them. 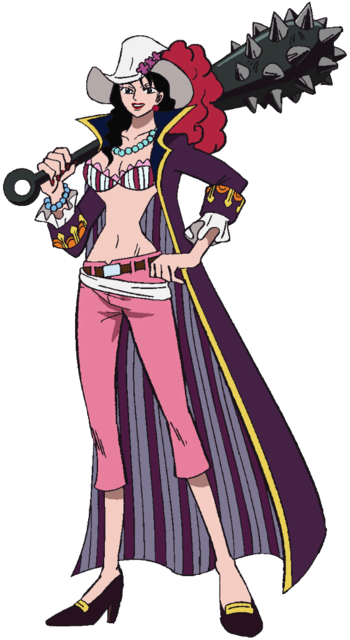 Click here to see her before eating the Slip-Slip Fruit 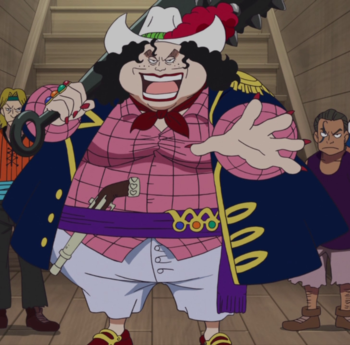 "Who's the most beautiful woman in the world?"

The lady pirate Alvida is the first enemy that Luffy faces in his travels. A grotesquely obese woman, she thinks of herself as the most beautiful woman on the seas (Oda stated that the one thing missing on her ship was a mirror), and would beat those who annoy her with an iron mace. Luffy incurs her wrath by calling her an old hag, but it only takes him one punch to lay her flat.

Sometime after her encounter with Luffy, she obtained and ate the Slip-Slip Fruit (Sube Sube no Mi), which transformed her from her short, fat, unsightly self into a tall, slim, and sultry woman. When people say that she's the most beautiful woman on the seas, now they really mean it. Currently she is co-captain of the Buggy Pirates.

She has a bounty of 5,000,000 Berries; however, as a Warlord's associate, her bounty is currently null. She holds one record for her bounty: Lowest non-active, yet non-Warlord bounty.

"If I told you I was here to mourn my fallen comrade and avenge him, would you laugh at me?!"

One of the officer agents of Baroque Works. He is regarded as the smartest of the officers and only got the position of "Mr. 3" because of that. He has eaten the Wax-Wax Fruit (Doru Doru no Mi) which allows him to create and control candle wax at will.

He faces the Straw Hats at Little Garden and gets defeated, after which he then travels to Alabasta to try and tell Mr. 0 about them, but gets fed to a giant bananadile. Thankfully, he turns out to be still alive and helps the captured Straw Hats and Smoker escape creating a wax key.

After the events at Alabasta, he is sent to Impel Down, where he befriends Buggy and assists in a break out, then heads with Luffy to Marineford and finally joins Buggy's crew. 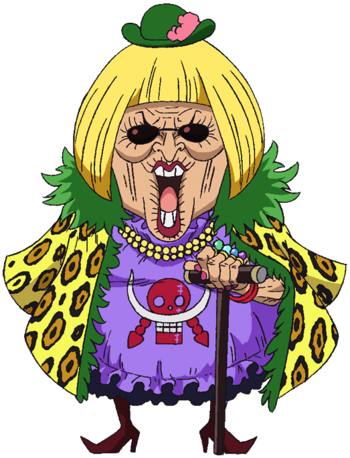 "Silly boy... What's the use in revenge?! It won’t get you a single belly! Money's what matters!"

A former pirate and the mother of Edward Weevil who is after Whitebeard's supposed fortune.

Alternative Title(s): One Piece The Seven Warlords Of The Sea Crews