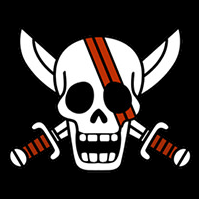 The mighty pirate crew led by Luffy's childhood hero Shanks, and the first pirates to be seen in the series. Among their ranks are Ben Beckman, Lucky Roux, Usopp's father Yasopp and several (as-yet-unidentified) high-ranking members

seen at Dawn Island and again at the finale of Marineford as well as Rockstar, a rookie who just recently joined.

Although they must be exceptionally powerful as an Emperor Crew and do have islands claimed as their territories, the Red Hair Pirates have been mostly seen partying and are exceptionally friendly, even leaving unrelated civilians at peace and being willing to be humiliated by a bunch of no-name mountain bandits to keep the peace going. Despite appearing to be the less dangerous Emperor Crew, they are feared around the world, especially by the World Government. Their antics and talk of freedom on the seas are what inspired Luffy to be a pirate. Other than that, very little is known about them, except they are a powerful crew that is to be respected.

Shanks' second-in-command and the First Mate of the Red Hair Pirates. His fighting skills were displayed in the very first chapter of the story, wherein he defeats a gang of mountain bandits using only a cigarette and a rifle (used as a club). In his following appearance he looks older and has more scars, but he hasn't lost the edge. 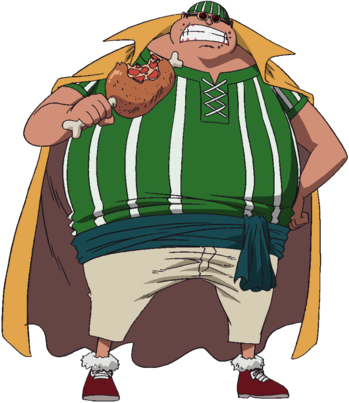 One of the most prominent members of the Red Hair Pirates. An obese man who is always seen with a carefree grin and eating a piece of meat.

Despite his fat and seemingly harmless appearance, Lucky Roux is a very fast at using his gun. 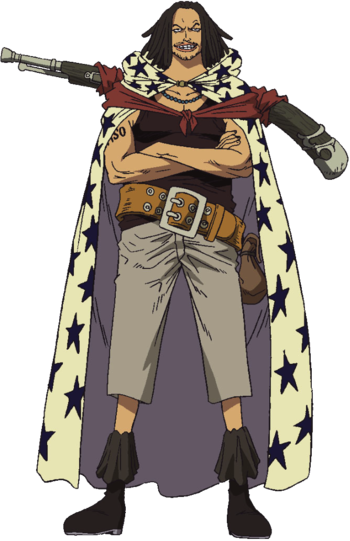 Usopp's father and another prominent member of the Red Hair Pirates, being a renowned marksman just like his son would be. He left behind his young son and wife to become a pirate and sail the seas, having been recruited by Shanks. Both of them supported his endeavors.

A newcomer to the Red Hair Pirates.