"Wah!! Talking animals!" —Usopp
"There are no weak members of this herd!! All Minks are natural born fighters!! Even our suckling babies have the gift of self-defense!!"
—Monji (Chapter 808)
Advertisement:

Also sometimes referred to as "Minkmen", the Minks are a tribe of Beast Men (only mammals) who live a mostly isolated life on the moving island of Zou, and have been doing so for over a millennium. Exactly how animalistic they are varies between individuals. You can have almost talking animals or someone Little Bit Beastly. They are led by two leaders, Duke Dogstorm and Boss Cat Viper, who cannot stand each other and thus rule at different times of the day: Dogstorm rules during the day, while Cat Viper during the night.

While all Minks are natural born fighters, there are two specific groups of warriors who protect the civilians: the Musketeers, led by Shishilian, the main diurnal force, and the Guardians, led by Pedro, the main nocturnal force. Even among the Minks, members of these groups are considered to be elite warriors.

The Minks have recently warred against a fleet of the Animal Kingdom Pirates because of their allegiance to the late lord Oden Kozuki from Wano, and they protected the life of the ninja Raizo. They subsequently befriend the Straw Hats and ally with other parties to fight Kaido. 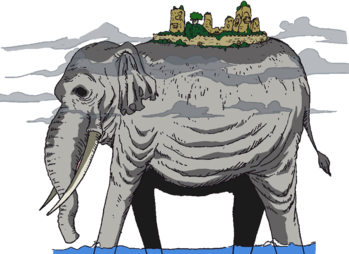 The colossal, sentient elephant that carries the entire country of Zou on its back. It roams the planet endlessly, and it's known to have existed for at least 1,000 years and has carried the Mink people for a similar amount of time. The elephant comes from an unusual species with multi-jointed legs that are incredibly long and reach far down into the ocean floor.

The minks have two rulers, Duke Dogstorm and Boss Cat Viper, who rule at different times because they can't stand each other, with Dogstorm ruling during the day (6am to 6pm) and Cat Viper during the night (6pm-6am). They have vastly different personalities: Dogstorm is calm and composed while Cat Viper is wild and boastful. They were previously ruled by a single leader, Duke Genghis Baan. 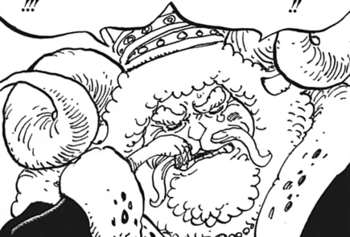 A sheep mink and the former ruler of the Mokomo Dukedom.

Tropes pertaining both Dogstorm and Catviper
"As I said earlier, the Mokomo Dukedom is ruled over by two kings at all times. The official sovereign is Duke Dogstorm. But Cat Viper, charged with protecting the Whale Forest over the generations, possesses equal authority"
—Wanda (Chapter 809)
Duke Dogstorm 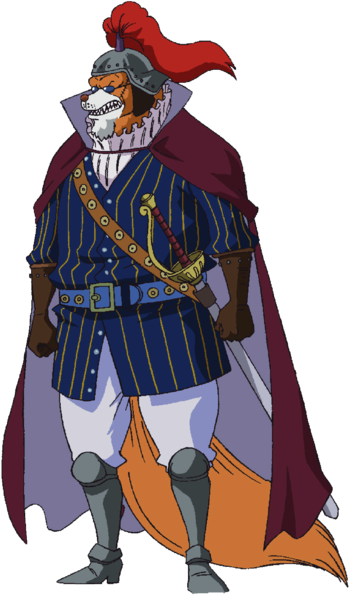 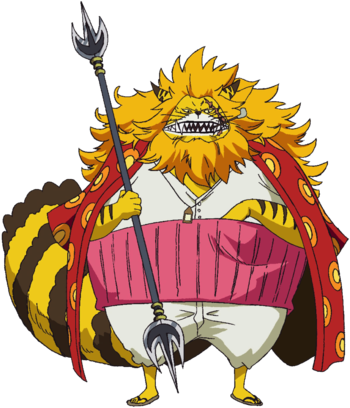 The main diurnal force, led by Duke Dogstorm. They are led by the Dogstorm Three Musketeers.

A Lion Mink and the captain of the Musketeer Squad. He always acts over-the-top and, befitting for his title, is one of the strongest Mink warriors, with a very aggressive sword-style.

A fox Mink and one of the Dogstorm Three Musketeers. He is always seen with a smirk on his face. He fights with dual rapiers, which he channels Electro through.

A zebra Mink and one of the Dogstorm Three Musketeers. He is rather calm and stoic. He fights with a rapier, which he channels Electro through.

A female canine Mink who serves in the Musketeers and acts as one of the assistants to the two Kings on Zou. A born warrior like every Mink, she's one of the first people the Straw Hats encounter on the island.

A young rabbit Mink and one of Dogstorm's musketeers and the rulers' aides. Having never left Zou before and curious about the outside world, she decides to tag along with the Straw Hats as they went to Whole Cake Island to rescue Sanji.

Despite being a musketeer, she's very close to Pedro because he used to train her when she was younger. 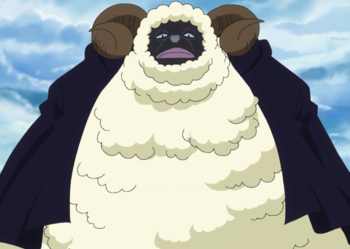 A large sheep Mink and one of the Musketeer Squad. He's friends with Nami, who likes sleeping on him.

The main nocturnal force, led by Boss Cat Viper. Their main duty is to protect the Road Poneglyph within the Whale Tree.

"[Carrot], it doesn't matter how you do it. Become a strong warrior, and have patience! Everyone, sooner or later, gets their own time to shine!"

A jaguar Mink and captain of the Guardians, who joins the Sanji Retrieval team. He's very loyal and selfless, as he offers to sacrifice his life for the sake of others multiple times.

In the past, he was the captain of the Nox Pirates until their crushing defeats at the hands of the Big Mom Pirates. 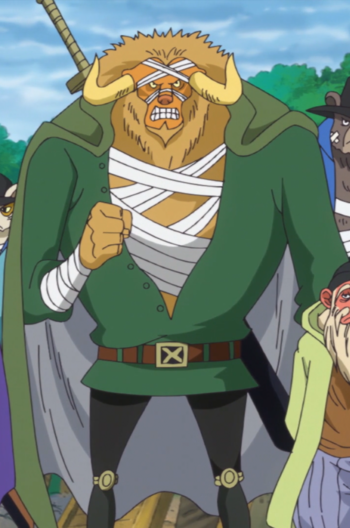 A Bull Mink and one of the Guardians of the Whale Forest, and takes his role very seriously. 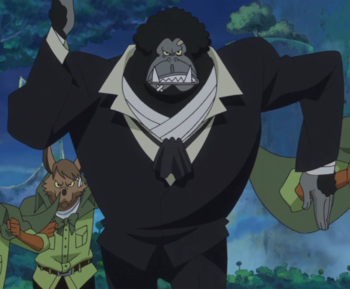 A Gorilla Mink (also known by his initials BB) and one of the Guardians. 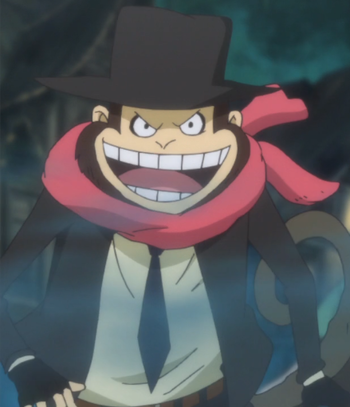 A monkey Mink and one of the Guardians.

A reindeer Mink and one of the Guardians. 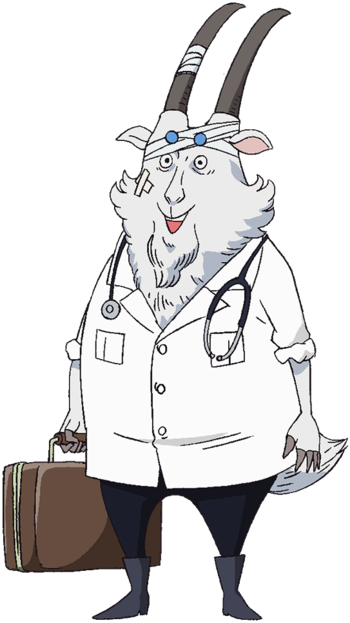 A Goat Mink and one of Duke Dogstorm's subjects. He is a doctor and helps Chopper healing the minks at Zou and at finding a cure for Queen's virus at Onigashima. 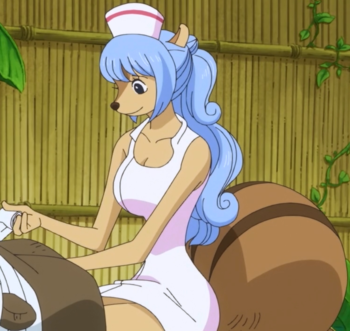 A squirrel Mink who is a nurse and assistant to Miyagi. 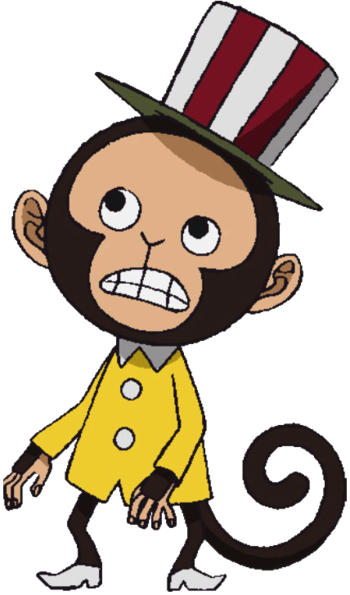 A Monkey Mink who is the gatekeeper of the Mokomo Dukedom. 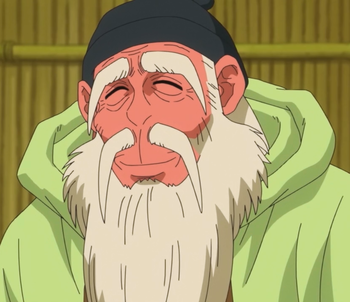 An old Monkey Mink. When Jack and his men arrive in Zou looking for Raizo, he tries to negotiate with them in order to avoid a war, but fails at doing so. 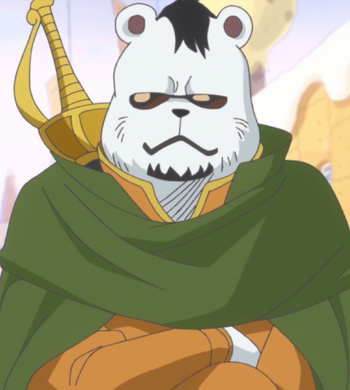 Zepo was a polar bear Mink and Bepo's older brother. He was a member of the Nox Pirates. He was killed by Big Mom five years before the events of Zou after he spun her Roulette Wheel.