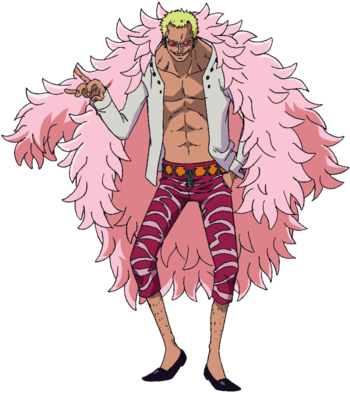 "The beginning is upon us! I suggest you prepare. We're drawing close to a new world in which only true pirates can survive. The weak should run while they still can or be swept away by the tides of time, as they roll back to reveal a new era of champions!"
— Chapter 801

The third of the Seven Warlords to be formally introduced, captain of the Donquixote Pirates and the former king of Dressrosa. Sly, rude and disrespectful towards the World Government, Doflamingo is sadistically playful with others, and seems to delight in causing and participating in chaos. In contrast to the sadistic way he treats most people, he is genuinely affectionate towards his quirky crew, who he considers to be his family (in a twisted reflection of Luffy's relationship with his crew). In turn, his crew all respect and love him, affectionately referring to him as "Doffy". He has eaten the String-String Fruit (Ito Ito no Mi), which allows him to produce strings and literally manipulate people like puppets, sever limbs with ease, and travel across the sky just as easily. He also demonstrates the ability to use Haki, being one of the few known users of Conqueror's Haki to exist.

Fitting in with his "puppet master" motif, Doflamingo eventually becomes the Underworld's top broker under the alias "Joker", and has countless underworld connections, including planting moles in the Marines, selling weapons to countries to provoke war, and formerly oversaw a massive slaver ring that catered towards the Celestial Dragon nobility. His most important partnership is with Kaido, who he keeps happy by producing artificial Zoan Devil Fruits known as SMILEs to maintain Kaido's beast army. He is a believer in the New Age, an era where pirates focus on what's around them rather than embark on pursuits of romanticism, making him the antithesis of the Great Age of Pirates that Gold Roger set in motion.

After the Time Skip, his influence is felt starting from the Punk Hazard arc and finally culminates with him becoming the main antagonist of the Dressrosa arc. It was revealed that he was a former Celestial Dragon before losing his status. After a series of long, grueling battles, his "family" is defeated, with Doflamingo himself beaten by Luffy with Law's aid. Due to Issho's actions, the World Government cannot cover up his activities and has no choice but to strip Doflamingo of his Warlord title.

Prior to joining the Warlords, his bounty was 340,000,000 Berries, the highest known bounty yet revealed in the series until post-time skip. Since he's arrested immediately following his defeat, it has not been reinstated.

Finally, he's also notable for being the first enemy to witness and fall to Gear Four, Luffy's incredibly powerful Next Tier Power-Up.