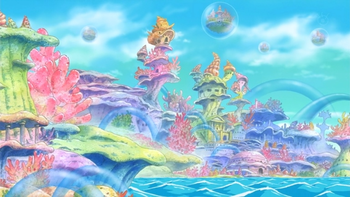 Fish-Man Island is the underwater home of the Fish-Men and Merfolk races, situated on the ocean floor 10,000 meters below sea level, directly underneath Mariejois. It is located inside a giant hole inside a deep trench that goes underneath the Red Line, encased inside a giant bubble. It has a section inhabited mostly by Merfolk and another mostly by Fish-men. However, mixed marriages between the two races are allowed. Fish-Man Island has endured a long history of prejudice by humans that has placed it under the protection of influential pirates at least three times in the story. Its location between Paradise and the New World makes it a frequent stop for many pirate crews. Thanks to being located inside a giant bubble, it allows land-races to breathe and live inside, while the giant tree Eve provides light hundreds of meters below the sea. The great ark Noah lies nearby the main island, built over 800 years ago to carry the island's population and realize their long held dream of moving to the surface. Built around the Noah is the Fish-Man District, a hotbed of crime and racism towards humans, and the headquarters of the New Fish-Man Pirates.

It is also the main setting of the arc of the same name. 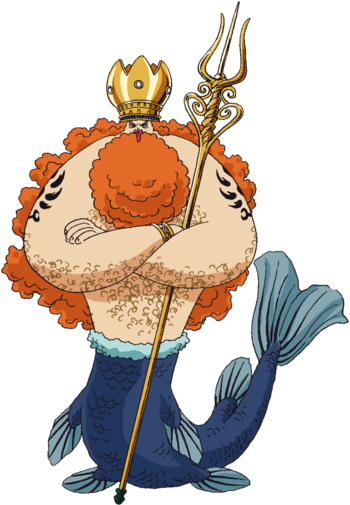 A Coelacanth Merman and the King of the Ryugu Kingdom in Fish-Man Island. He is a wise, if absent-minded king who cares for the good of his kingdom, and is very protective of his daughter. 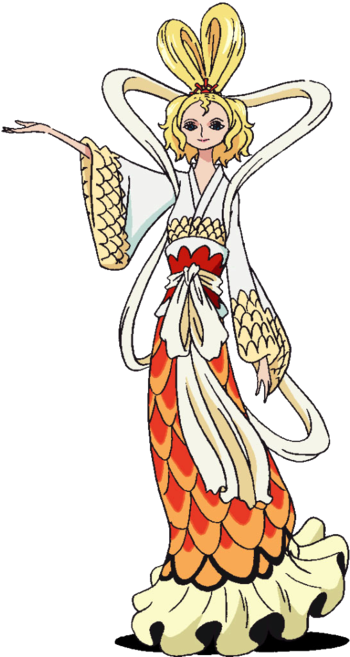 "Their skin is a different color! They look different!" We can't wait for the humans who say those things to come around. We must go to them!"
—Chapter 621

A Goldfish Mermaid and the former queen of the Ryuguu Kingdom. Unlike Fisher Tiger, she wants a peaceful co-existence with the humans and spends most of the time fighting for this cause, even if hardly anyone support her. After making a deal with the World Nobles, many begins to support her and the idea of Fish-men living with humans, until she's assassinated. Her subjects are still loyal to her and her beliefs however. 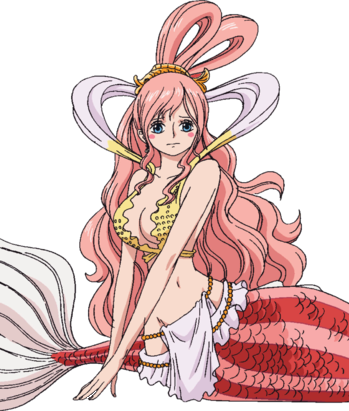 "It was the promise I made with mother on her deathbed!! That no matter who the criminal was, not to hate them!"

The princess of the Ryugu Kingdom and the youngest child of King Neptune. A surprisingly huge Giant Smelt-Whiting mermaid. She is really huge, but has a very fragile personality. She's kept locked away in the castle tower to keep Vander Decken from killing her with his Devil Fruit ability. Because of this isolation, she has a poor understanding of the world outside, but later develops an interest in it thanks to Luffy's help. 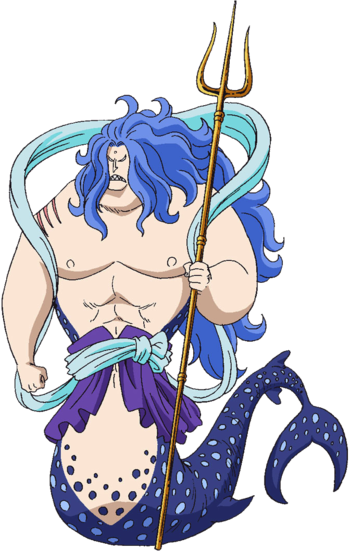 The eldest of the three princes of the Ryugu Kingdom and a shark merman. He assists Luffy in his battle against Hody Jones. 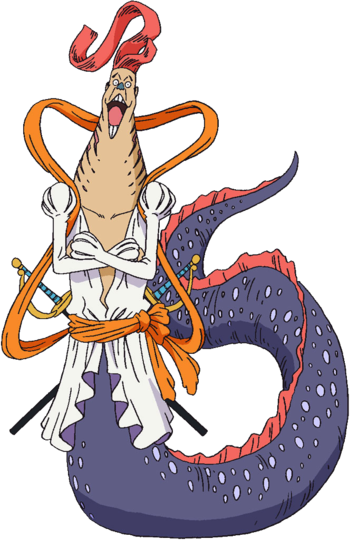 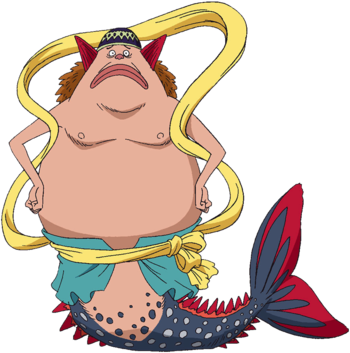 Respectively the second and third oldest prince of the Ryugu Kingdom. Ryuboshi is a slim oarfish merman while Manboshi is a plump opah merman. Both like singing and dancing and even talk while singing.

The Royal army of the Ryuguu Kingdom, lead by Neptune's three sons. It was created recently to contrast the threat of the vicious Van Der Decken IX, who is harassing Mermaid Princess Shirahoshi and wants to marry her. 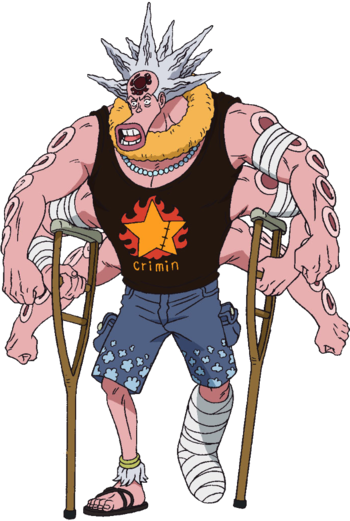 Hatchan, often called "Hachi", is an octopus Fish-man, former officer of the Arlong Pirates and a former member of the Sun Pirates. After the crew split up, he joined Arlong's crew and became the handler of the sea cow Momoo. When the Straw Hats came to take down Arlong, he was defeated by Zoro, and was imprisoned by the Marines. However, he managed to escape, and met the mermaid Camie after saving her from Sea Kings and Fish-man slavers. He opened up a seafood stand with her, fulfilling a childhood dream.

Later on, he crossed paths with the Straw Hats once again while they were heading for Fish-Man Island. He revealed that he felt bad about what had happened at Arlong Park, and decided to try and make it up to them and Nami by guiding them to the Sabaody Archipelago where they could have their ship coated for the underwater journey by Silvers Rayleigh, an old friend of his from before his pirate days. 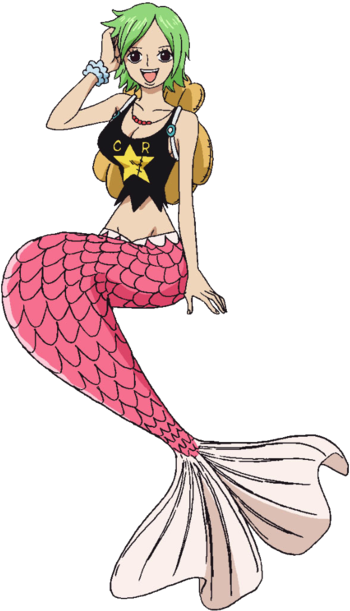 A young Kissing Gourami mermaid who dreams of being a fashion designer. She has a tendency to be eaten by sea monsters and kidnapped by slavers, having met Hatchan when he rescued her from one such incident. She helps him open a seafood stand after he saved her again from a group of Fish-man slavers. When she and Hatchan take the Straw Hats to the Sabaody Archipelago, her being kidnapped by slavers (yes, again) sets off a series of escalating From Bad to Worse moments for the pirate crew.

She is accompanied by a talking starfish named Pappagu, who constantly frets over her safety. Hatchan's friend Shakky teases her occasionally for having a crush on the octopus Fish-man. 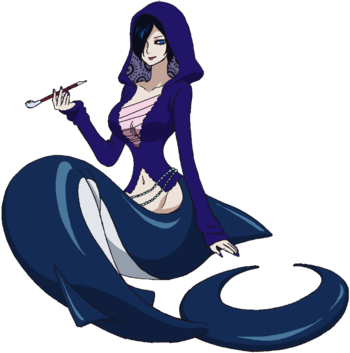 A beautiful, large Shortfin Mako Mermaid who runs the Mermaid Café in Fish-Man Island. Sharley is also a well known seeress, and foretold great events like the coming of the Great Age of Piracy and Whitebeard's death. She recently freaked out when she predicted Fish-Man Island's destruction at the hands of a person wearing a "straw hat," which may implicate Luffy or Decken. She is also the younger half-sister of Arlong. 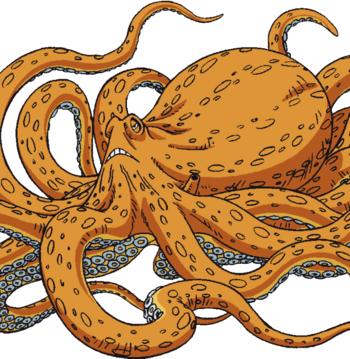 Also known as the Kraken, a gigantic octopus that resides deep beneath the ocean. He first appears as an obstacle for the Straw Hats before they can reach Fish-Man Island, but Luffy Zoro and Sanji defeat him with ease. It's later revealed he works for the New Fish-Man Pirates due to complicated reasons. The Kraken gets his new name "Surume" from Luffy after being befriended by him following the battle. 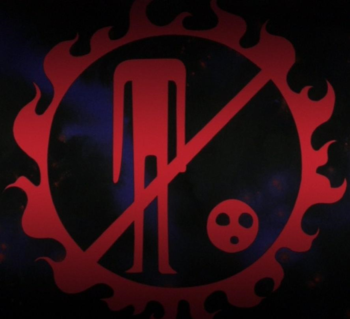 Having an intense hatred for humans, the New Fish-Man Pirates become downright monstrous in their own enslavement of captured sailors and pirates, assassination and oppression against anyone who doesn't hate humans as much as they do, and plan to usurp the throne of Fish-Man Island to attend the Reverie and slaughter the kings of the surface.

The crew possesses many advantages, being Fish-men fighting at the bottom of the sea, and are 100,000 strong, with 70,000 Fish-men and 30,000 slaves. Moreover, their higher-ups use a special Energy Steroid to boost their strength. Nonetheless, they are easily decimated by the Straw Hats, freshly out of a two years long training.

The crew was successfully dismantled and its leaders imprisoned, rendered harmless and extremely old due to the overuse of steroids. 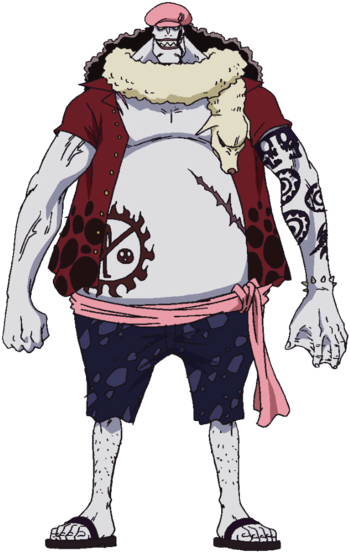 "We were chosen by the heavens. Granted this power... To bring down judgement upon humanity!!!"
"We are going to steal back Fish-Man Island, the center of the world, from that cowardly Sea God Neptune! And we are going to pull down all you humans into the abyss of the sea! We are going to teach you all that the Fish-men are the true supreme race!"
—Chapter 617

A Great White Shark Fish-man, the captain of the New Fish-Man Pirates and a former soldier of the Neptune army, Hody Jones is an admirer of Arlong and strongly believes in his ideals. He leads the assault on the Ryugu Palace in order to take over the kingdom while his underlings create chaos elsewhere on the Island. 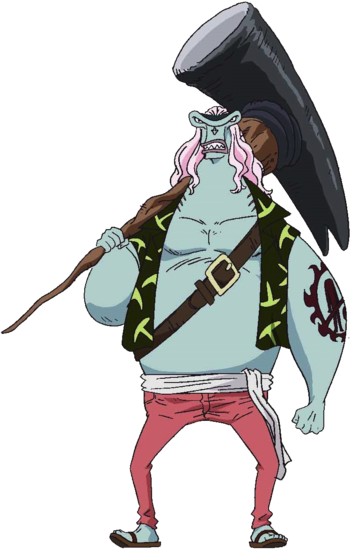 "And it was the humans who drove us to madness! You're not going anywhere!! You'll stay here, and focus your rage on them, KABLAMM!! Every calamity that has befallen our kind has its roots in humanity, ZABWAM!!"
—Chapter 645

A hammerhead shark Fish-man and one of the officers of the New Fish-Man Pirates.

"Aristocrat of the Fish-Man District" Zeo

"Aristocrat of the Fish-man District" Zeo

"Death is another form of revenge!!! Die, and curse humankind from beyond the grave!! This tragedy shall become our flesh and blood!! Hatred is never forgotten!! It is passed on, and will always lead to vengeance!! "
—Chapter 645

An officer of the New Fish-Man Pirates and Japanese wobbegong Fish-man. 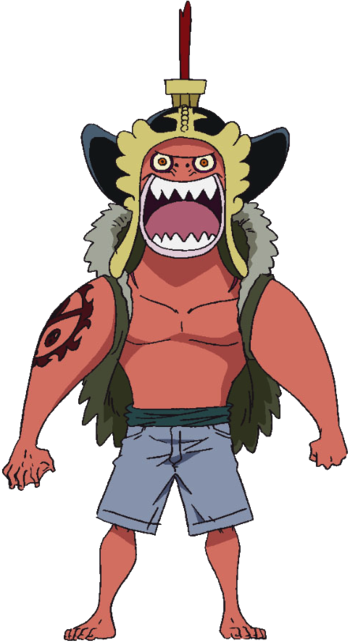 A cookie-cutter shark Fish-man and officer of the New Fish-Man Pirates. Like his fish-type, Daruma is small but very aggressive. During the fight at Gyoconde Plaza, he's defeated by Usopp. 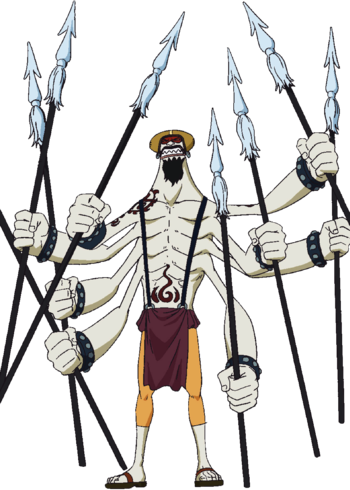 A giant squid Fish-man and officer of the New Fish-Man Pirates. Ikaros doesn't care for his subordinates and impales them for fimsly reasons, although he shows some affection for his fellow officers and Hody, presumably because they grew up together. He has a huge fear of fire as result of his friend dying from getting too close to the sun.

In combat, he wields eight spears, one for each arm, with actual squids on top, but can also use his ink-split or his pointy head. 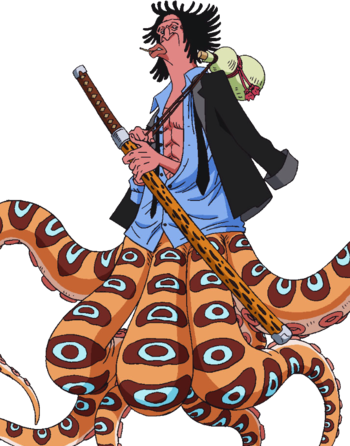 A poisonous blue-ringed octopus merman known as the best swordsman on Fish-Man Island, and a mercenary working as the New Fish-Man Pirates' assassin. 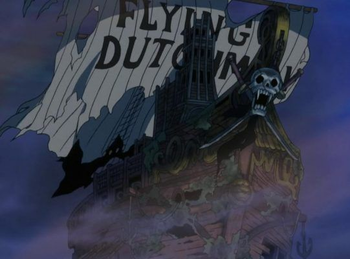 A band of Pirates that sail around the area near Fish-Man Island, their Captain is Vander Decken IX, a Japanese Bullhead Shark Fish-man. They sail on the titular ship, a mysterious ship said to be cursed by the gods and forced to roam the depths of the ocean which is actually just a decrepit old ship that got Shrouded in Myth & inaccuracies. Vander Decken is wanted by the Neptune Army for his harassments toward the beautiful Mermaid Princess Shirahoshi. Recently he had allied himself with Hody Jones to take over Ryugu Kingdom, but toward the end of the battle, Hody seemingly killed Decken. 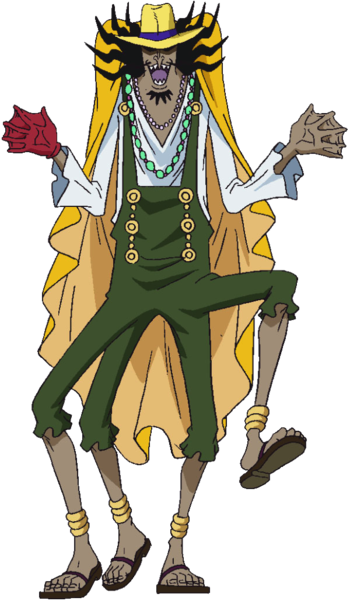 "Princess Shirahoshi! No matter how long I search this wide ocean floor, I will never find such a grand and beautiful woman such as you! If the love you possess allow us to be married, then good! But you must not live on with your life with someone else! If then that time comes, then you will die Shirahoshi! You must pledge your love to me or die! Your fate is death or marriage!"

The legendary captain of the Flying Pirates and the Flying Dutchman, a mysterious ship that travels undersea. Is eventually revealed to be the descendant of the real deal, and a Bullhead Shark Fish-man. He's wanted in the Ryugu kingdom because of his one-sided love for the Mermaid Princess Shirahoshi. He eventually teams up with Hody Jones and the New Fish-Man Pirates in order to take over Fish-Man Island and marry Shirahoshi. However, after being rejected by the princess, he's now trying to kill her. He also has eaten the Mark-Mark Fruit (Mato Mato no Mi), a Devil Fruit that allows him to always hit his targets from anywhere.

"Large Monk" Wadatsumi
After being exiled from Fish-Man Island, he has joined the Sun Pirates, so you can find his folder here.

A man who lived in the Void Century. He promised Poseidon and the people of Fish-Man Island that he'd lift Noah up to the surface, but failed in this commitment for unknown reasons.