Characters / Ogre Battle: The March of the Black Queen

This here is a list of characters that appear in Ogre Battle: The March of the Black Queen. Expect spoilers. 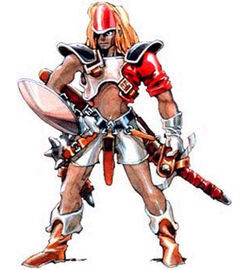 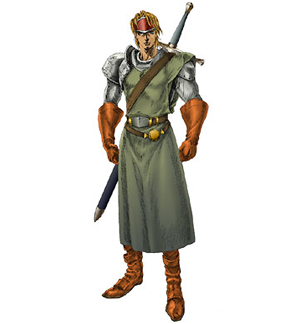 The hero of March of the Black Queen. Originally just a warrior that Warren chooses to lead the rebellion to free the land of Xenobia from the clutches of The Empire. He gathered many allies and liberated the land, and in the Canon ending, surrendered the throne to the rightful heir, Prince Tristan. He then left to Palatinus, in order to investigate the activities of Lodis. There, he helped out Magnus Gallant and his own Revolution, and later left to Nirdam to liberate it from Lodis.

A Knight from Xenobia, and a good friend of Warren. He is the first ally Destin recruits, and backs the Liberation Army to the very end.

When the Holy Sword Brynhildr is stolen, Lanselot is sent by King Tristan to the land of Valeria in order to retrieve it from the Dark Knights, under the guise that they're exiled. He meets up with Denam, becoming his first mentor, and enlists in the Walister Resistance. Unfortunately, during the attack at Rhime, he is captured by the Dark Knights, and tortured to the point of insanity, leaving him unable to walk or speak. The Kingdom of Xenobia lists him as "MIA" due to this.

A Seer from Xenobia that envisioned the successful liberation of the continent of Xenobia. This vision brings him to seek out Destin Faroda to lead the revolution. He stays with him until the very end of the game, and is one of Destin's most trusted allies.

Warren accompanies Lanselot on his mission to retrieve the Holy Sword, Brynhildr. Warren escapes the attack on Rhime, but becomes ill soon after, bedridden for the remainder of the game. During Denam's last battle, underneath Eden, Warren teleports Denam and his army away from the pull of the Chaos Gate, getting pulled in himself. He, like Lanselot, is listed 'MIA'.

An Eagle Man from the Charlom District of Xenobia. He's reluctant to join the Liberation Army at first, due to his best friend, Gilbert, being on the opposing side. Once Destin gives him the Wings of Liberty, it reminds him of how things used to be, and he joins the army with the intent to convince Gilbert of his wrongs.

Canopus is one of the men chosen to retrieve the Brynhildr from the Dark Knights. He is the first character to join Denam's army, and acts as a guide to him during much of the game, giving helpful advice and acting as the peace keeper between Denam and Catiua.

Beast Tamer and governor of the Charlom District. He turns over to the Empire in order to protect the people of Charlom from the Empires oppression, an act that infuriates his friend Canopus. He's eventually beaten, and is spared from execution thanks to Canopus' interference. Gilbert then joins the Xenobian revolution, and later he accompanies Destin to Palatinus.

He also later returns in one of the bad ends of Tactics Ogre, whereas he informs Tristan about the upcoming invasion of Lodis to Valeria.

The only character to appear in every game in the series, a Hot Witch who's keen with research about Pumpkin Heads. She starts out as an enemy who's given a place for research for her Pumpkin Heads in the Xytegenian Empire, causing havoc to the locals. She's beaten out by the rebellion, and depending on the player's actions, she may either get executed or spared. If spared, she may ask for some things later and can even join the team.

Canonically, she is spared, because she managed to move to Valeria and opened a store selling a lot of rare items. If Denam bought a lot of orbs, she will offer to join Denam's platoon.

The head of the Royal Knights of Xenobia, Ashe was accused of killing King Gran's family. In fact he was framed, but he refused to defend himself as punishment for his failure. He is rescued from prison by Destin and joins his army to free Xenobis.

A priestess from Island Avalon, daughter of High Priest Foris, who got killed by Dark Knight Gares. She wants revenge and when offered to join the revolution, she did with gusto. She later follows Destin to Palatinus.

Formerly a High Monk from a region in Xenobia, she got demoted into a warden in Diaspola. She is the lover of Quass Debonair, and she didn't take rumors of his death well, and started opposing the rebellion just so she could be with Debonair in death. However, Destin convinced her that Debonair is still alive and she ends up defecting to the rebellion. She is reunited with Debonair for the remainder of the rebellion, but gets left behind when Debonair traveled to Palatinus with Destin.

The daughter of Highland's Lord Hikash Vinzalf and the first female Paladins. She is first found hiding in the Valley of Kastro, after running off from a forced wedding from the nefarious Baron Apros, and gets rumored to be a half-woman half-scorpion. She enlists herself to the rebellion and eventually confronts Apros in the wedding place, Malano, although she's accompanied with Prince Tristan himself. She later ends up confronting her father, besting him in combat and tearfully bidding him farewell. At the end of the rebellion, she marries Tristan and became the Queen of Xenobia.

A former pupil of Sage Rashidi who rebelled against his master's evil's ways. As a result, he got petrified by his fellow student Albeleo. The rebellion under Destin Faroda restored his status and he joined the rebellion, fighting against Albeleo and later Rashidi himself. After the rebellion ended, Saradin followed Destin to Palatinus.

The Prince of Xenobia. He was spared from the massacre of the Royal Family, went hiding and after one Gaiden Game, he eventually stationed himself in the City of Malano, trying to strike against Baron Apros, a traitor to Xenobia Kingdom. He joins the rebellion and fought in various battles, despite learning that his mother got killed. At the end of the rebellion, he is crowned the King of Xenobia, known as White King, and also got to marry the Paladin Rauny, but regretted that Destin had to go to Palatinus rather than continuing to be in service of the Kingdom (though there is no choice).

Unfortunately, years later, the Xenobian treasure, the Holy Sword Brynhildr, got stolen by the Dark Knights Loslorien, thus Tristan sent out Lanselot, Warren and Canopus, along with two Holy Knights, Mirdyn and Gildas, to retrieve the sword under the guise that they're exiled.

The Head Angel sent from heaven to recover her fallen sister. Yushis is imprisoned by Rashidi and freed by Destin. Sadly she is forced to kill her Death Seeker sister, and joins Destin in taking down Rashidi.

One of the 4 Devas (Generals), of the Empire. Destin first fights him in Xenobia, where he shows him how corrupt the Empire is. Debonair returns to confront the Empress and gets jailed and tortured as a traitor. Destin frees him with Norn's help, and he joins the rebellion. Later confronts and kills his friend and former fellow Deva, Figaro, who was loyal to the empire despite the corruption.

Later, he joins Destin as he heads to fight Lodis.

One of the legendary three High Knights of the first Ogre Battle. Slust defeated the monsters, insuring mankind's dominion on earth. He was made immortal by the gods, given rulership of a flying island. Rashidi put a charm on him to have him fight Destin, but Destin snapped him out of it. Slust joined the rebellion after.

One of the legendary three High Knights of the first Ogre Battle. Fenril defeated the monsters, insuring mankind's dominion on earth. She was made immortal by the gods, given rulership of a flying island. Rashidi put a charm on her to have her fight Destin, but Destin snapped her out of it. Fenril joined the rebellion after.

She was entrusted with the ownership of the Holy Sword Brynhildr, which would become a national treasure to Xenobia when she handed it down to Tristan after the rebellion. But then, the Dark Knights Loslorien stole it...

One of the legendary three High Knights of the first Ogre Battle, and the most powerful. Fogel defeated the monsters, insuring mankind's dominion on earth. He was made immortal by the gods, given rulership of a flying island. At one point fought and killed a powerful and supposed invincible dragon, but after his victory was cursed with dragon-like appearance. Rashidi put a charm on him to have her fight Destin, but Destin snapped him out of it. Fogel joined the rebellion after. Remains cursed after the game's ending.

One of the demonic generals of the Ogre Battle, defeated by Slust, Fenril, and Fogel, he was sealed in a castle. Rashidi sought to free him. 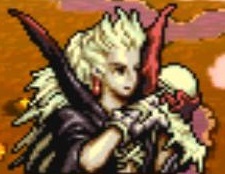 Empress of the Sacred Xytengian Empire and Queen of Hyland before that and the titular "Black Queen" of the game's name. The central villain of the story.

One of "The Five Heroes" who helped form the kingdoms of Xytengia, Rashidi soon fell to evil after that, and lusts for the "Black Diamond", an artifact of extreme power.