"Don Wei doesn't know that I'm really his daughter, Eva. But maybe he'll love me as the pilot, Molly."

An ambitious 15 year-old Earth girl who escapes from her harsh boarding school to find her father, Don Wei, but when he doesn't recognize her she ends up landing a job as a mechanic for his company. Lacking in self-confidence and intimidated by his harsh demeanor, Eva is unable to tell Don Wei who she really is, and assumes the name "Molly" after reading it on a conveniently placed poster. Eva soon becomes the pilot of the Whizzing Arrow II for the Earth Team after their star, Rick Thunderbolt, is injured during the first race. She wants to win the ultimate prize to bring her mother back to life. 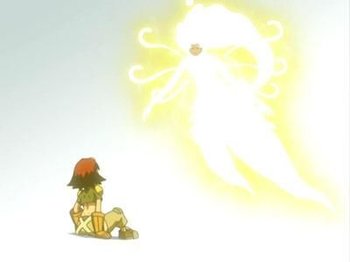 to see him as the new Avatar

A 17 year-old rambunctious army soldier who is hired by Don Wei to be the gunner for the Whizzing Arrow II. He eventually falls in love with Eva.

"You've probably heard of me. I'm Don Wei. Just when I thought I'd reached the peak of my career, I was handed the greatest challenge ever faced by man:to lead the Earth team to victory in the Great Race of Oban. Since the start of the pre-selections on the planet Alwas, we've had a few surprises. But I remain confident we'll pull through! Winning, whatever the odds. That's what my job is all about."

A Minor League Racing Champion and one of the best racers on Earth, Rick is chosen to accompany Don Wei as the Earth Team's original pilot. He is seriously injured in the team's first race and replaced by Molly.

Tropes that apply to Koji:

Tropes that apply to Stan:

The prince and knight of Nourasia who races on the back of a giant flying beetle named G'dar, which acts as his vehicle.

A small, eccentric being who proclaims himself to be the Avatar's loyal servant. 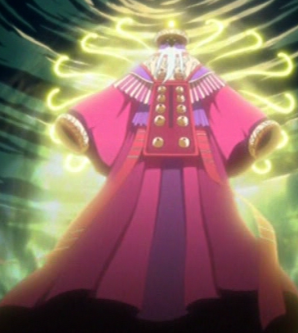 An enigmatic, omnipresent, and seemingly omnipotent entity who organizes the Great Race of Ōban every 10,000 years, and grants the winner their wish, or so the competitors were led to believe. 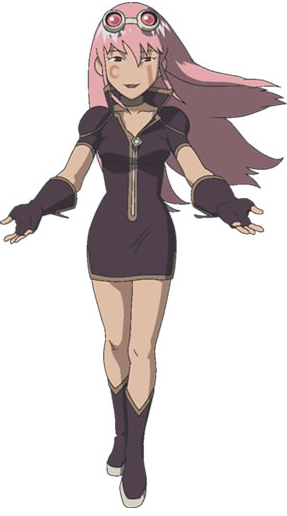 Eva's mother and Don's wife, one of the best racers on Earth who lost her life in a race ten years before the start of the series. 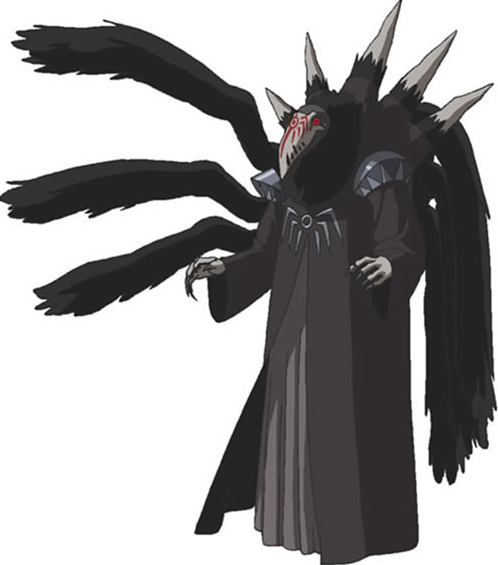 "I go by many names. I am the Lord of Purity, who tolerates no deviation. I am Canaletto, removed from his rightful throne. I am the Timeless One, waiting to bring the old world to its end!"

A dark, sinister being that was once the Avatar, but he refused to give up the title and so was imprisoned by the Great Beings. 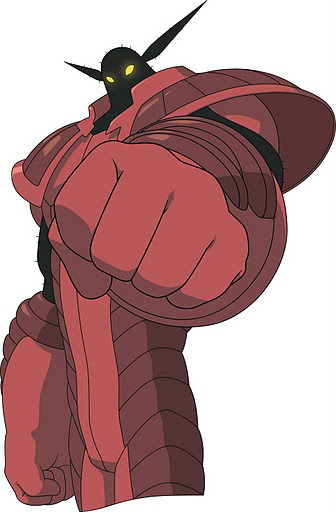 Colonel of the Crog Imperium and younger brother of the Crog leader. The Crogs are the sinister alien race that threatened to destroy Earth 25 years ago. He is determined to obtain the Ultimate Prize in order to enslave the entire galaxy under Crog rule.

Ambassador of the Fills; a mysterious, polymorphic, shadowy being. Ten years earlier he raced against Molly’s mother, Maya. Near the end of the race Maya’s ship crashed and exploded. Molly and her father since that day have believed that Spirit had intentionally killed Maya. 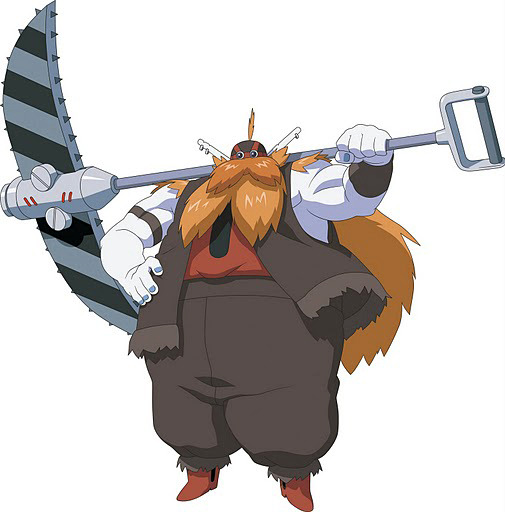 A giant, Viking-like racer from the planet Byrus who, despite his intimidating appearance, is a very friendly, good natured person.

A pilot from Alwas, one of the three planets that host the Great Race's preliminary matches. Somewhat arrogant and not quite as good as he seems; the judges fix the races for him, since he's the home-town favorite. He and his gunner, Marcel, pilot the Flying Fortress; a green star-racer that resembles a steam-powered train or tugboat. 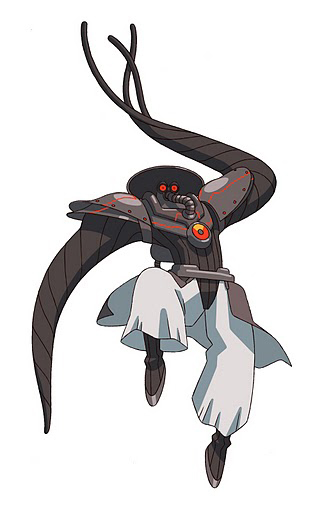 Voiced by: Brian Dobson (English), Jin Horikawa (Japanese), Omar Yami (French)
"I could squash you like an insect. But that would be ''an insult'' to all the insects of the galaxy!"
A biomechanical racer who, along with his ship, seems to run on steam power.
Ceres 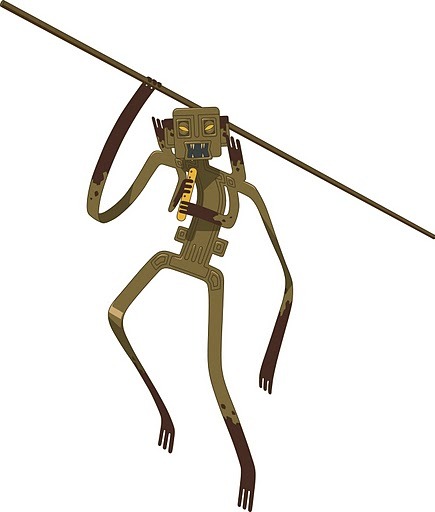 Voiced by: Kirby Morrow (English), Takeshi Maruyama (Japanese)
"How can you imagine even for a second that you are worthy of the Oban prize? Humans,Krogs,Nourasians;all the same. A few thousand years of existence and you think that you are actually important."
The last surviving member of the Mong, a very ancient race. He resembles a hieroglyphic carving come to life, and his ship is a bizarre tangle of pipes that apparently functions via an unknown form of planetary magnetism.
Para-dice 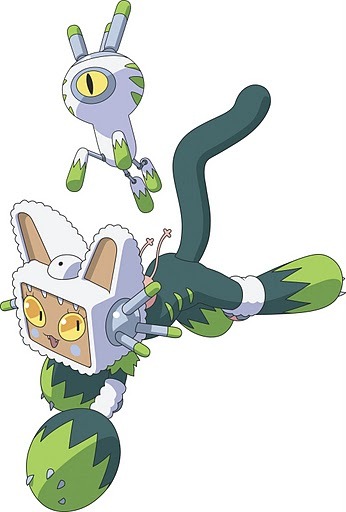 A cat-like, 12-year old hacker prodigy. She controls her ship via a dynamic footpad, which resembles a Dance Dance Revolution platform. She sees the Great Race as nothing more than a game. 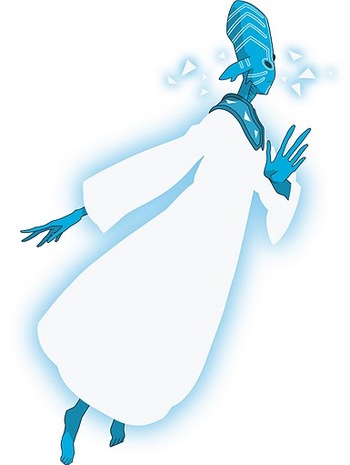 A 'magician' known across the galaxy with telekinetic super-powers that are rumored to equal those of the Avatar himself. Sul shows little emotion and rarely reacts to the other pilots unless attacked. He does not actually use a star-racer during the competition, instead he surrounds himself with glowing, diamond-shaped energy fields conjured and controlled by his mind. 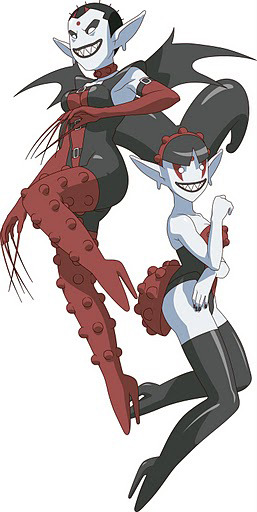 Ning is voiced by: Jillian Michaels (English), Ai Orikasa (Japanese)
Skun is voiced by: Colleen Wheeler (English), Tomoko Hiratsuji (Japanese)
"These Humans are getting a bit clingy, aren't they?"
"Well, They do have a female pilot!"
"But that doesn't make her one of us, does it? Time to introduce ourselves."

Two very proud and aggressive creatures from the destroyed planet Inna. Their star-racer is distinctive in that it is actually two ships that fly in tandem, but are capable of combining to form a more powerful craft. After combining their ships, they gain the ability to use an extremely powerful heat-seeking plasma cannon. Their star racers are rectangle-shaped, red with a black border and, when it is two separate racers, are driven like motorcycles.

Captain of a space-galleon, as bad-tempered as he is egocentric. Being a self-proclaimed pirate, he only sees the Ultimate Prize as a treasure to be claimed.

General of the Crog Imperium. He replaces Toros as the Crog's representative on Ōban, because Toros' loss to the Earth Team in the last race of the playoffs was "unacceptable".

Voiced by: Trevor Devall (English), Hideo Watanabe (Japanese)
"I am faster, I am smarter, and I am still under warranty. Humans are so last century!"
A robot that looks like a cylinder that walks on three flat metal legs. His star-racer is capable of transforming into a humanoid mech armed with a pair of energy swords and a battery of missile launchers.
O 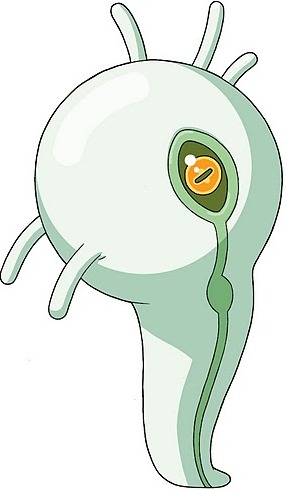 The tallest of the nine Ōban pilots, he resembles a large upside down teardrop with stubby legs and one large eye in the middle. He appears to "pilot" a large, bizarre, organic construct that looks similar to a jellyfish of some sort. 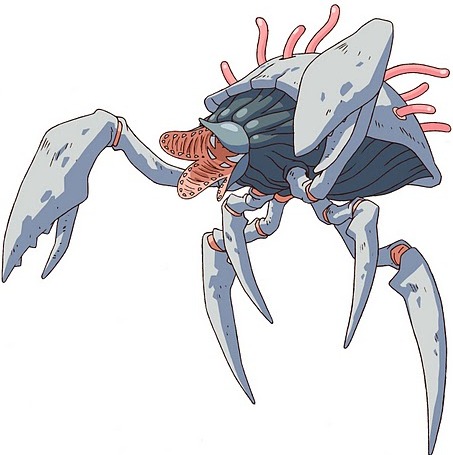 A large crab-like alien with a heavy, armored shell and large pincers, as well as telepathic tentacles. 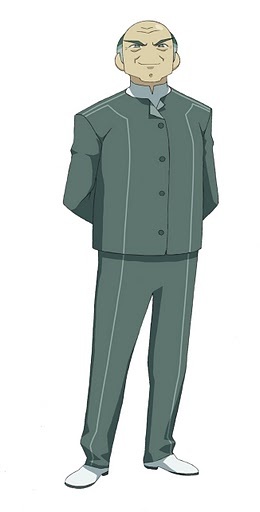 Voiced by: Richard Newman (English)
The president of the Earth Coalition, McMullen has been privy to the existence of the Avatar for many decades, but kept it secret as part of a Government Conspiracy. When the Great Race of Ōban draws near, he recruits Don Wei to form a team capable of competing.
Miss Stern
The headmistress of the Stern Boarding School, a dreary and oppressive institution where Eva was left by her father.
The Mad Scrub
A member of the scrub species on Alwas, and an insane hermit. He is discovered to be the one responsible for Rick Thunderbolt's Career-Ending Injury, which prompts the human to track him down for answers.
SPOILERS

A race of enigmatic Energy Beings who are the creators of Ōban, from which the entire galaxy originated via the planet-seeds. However, they grew complacent and jealous of each-other, and a catastrophic civil war exterminated their civilization. The survivors, wracked with guilt, chose to abandon their godhood and instead nominate a single mortal every 10,000 years to serve as the galaxy's solitary steward. This being is referred to as the "Avatar".