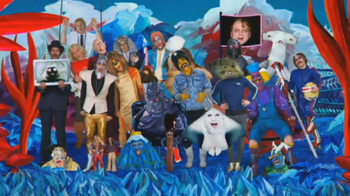 La la la-la la-la-la, people in the night and people up above

The star of the show. An eccentric artist.

Noel's butler and the Only Sane Man.

Noel's housekeeper and possibly a robot.

A dancer with a large heart on his chest.
Recurring Characters

A wannabe crusader who imagines questing through a virtual world when in reality he's just running around London being a nuisance.

A yellow beat cop with a talking wound in his shoulder.

A chocolate finger that works as a P.E. teacher and suffers PTSD.

A man with a giant shell for a head.

A folk singer with metallic hair and multiple eyes.

A man who is disappointed with the state of the world, which he'll always blame on Ice Cream Eyes.

A man who lives in a freezer that always has an alibi whenever the City Gent blames him.

A lion trapped in a zoo.

A purple clown with mechanical insides.

A man with a zen voice who feeds the Audience mashed potatoes. He's also a doctor.

A claymation figure of the real Joey Ramone.

The only fan of the series.
One-Off Characters

Ghost of a Flea

A travelling group on a quest to see the Jelly Fox.

A mountain that keeps clucking his tongue to the annoyance of Noel.

The Tiger with Chlamydia

A giant tiger-head on legs that gives chlamydiya by striking people with his prehensile penis.

A Hawaiian panther-man and film star.

A giant that stifles Noel's creativity.

A television executive that wants to turn Luxury Comedy into a reality series.

The Cucumbers of Cool

An alien race of cucumber people that inspired the definition of the word "cool".