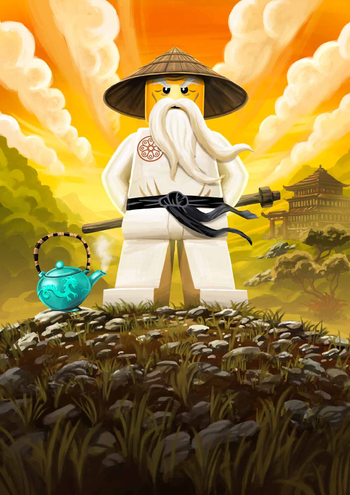 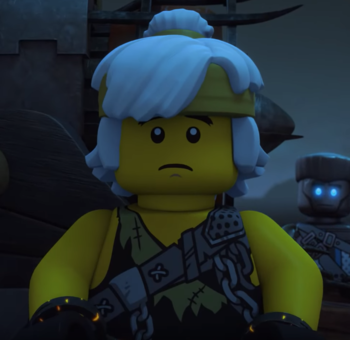 Debut: "Way of the Ninja"
Voiced by: Paul Dobson (as an adult), Caleb Skeris (as a toddler)

Wu is the second-born son of the First Spinjitzu Master and younger brother to Garmadon. A childhood incident led to the latter being bitten by the Great Devourer and slowly infected with evil. When Garmadon left to train with Master Chen, Wu came across the orphan Morro and took him on as a student - which would later turn into his biggest regret. He and his brother were then involved in the first Serpentine War on the side of the Elemental Masters as well as the conflict against the Time Twins. Eventually, Garmadon succumbed to the evil flowing in his veins and tried to take the Golden Weapons, leading to a battle that resulted in Wu banishing him to the Underworld.

Having accumulated much experience and wisdom over the last forty years, he would later seek out the Ninja and become their mentor in order to help them against their foes.

After slowly aging to death, the Ninja were forced to use the time reversal blade on him to save his life. Although they succeeded, Wu was accidentally turned into a toddler because of this, and the Sons of Garmadon kidnap him and Misako in order to use him to get the last Oni Mask. Over time, he gradually ages back to normal, reclaims his father's armor and confronts Garmadon alongside Lloyd. 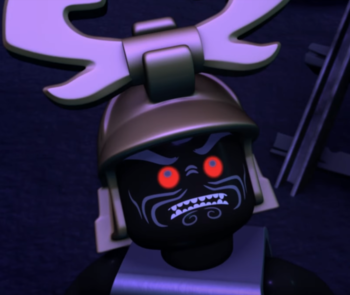 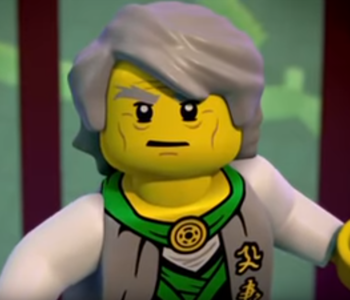 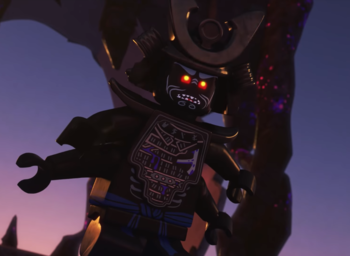 Garmadon is the first-born son of the First Spinjitzu Master and older brother to Wu. He was infected with evil by the Great Devourer as a child, and its influence grew on him throughout his life until he became a full-fledged villain. Before he succumbed fully to the evil in his blood, he fell in love with a woman called Misako and married her, at some point conceiving their son Lloyd. He was eventually banished to the Underworld as a mutated figure, and assumed leadership of the Skullkin Army. He plotted to return and collect the Golden Weapons and reshape Ninjago in his own evil image. After facing the Ninja for the first time, Garmadon escaped and became more powerful.

His villainy culminated in him being unwillingly possessed by the Overlord. In a final fight with Lloyd, the Overlord was defeated and exorcised from Garmadon along with all the evil in his blood, leaving him a normal human being again. Garmadon then takes up mentorship as penance for his evil, trying to and eventually failing to take a pacifist path. Catching his son trying to sneak off to a tournament with the Ninja, Garmadon joined them, knowing their host only too well as his evil former sensei, Master Chen. Garmadon did his best to protect Lloyd during the tournament, and finally sacrificed himself to stop a second Serpentine War.

Season 8 has him brought back from the Cursed Realm by his worshipers, The Sons Of Garmadon. Unlike before, Garmadon was brought back with only the worst traits of himself, making him completely different from even his former evil self. 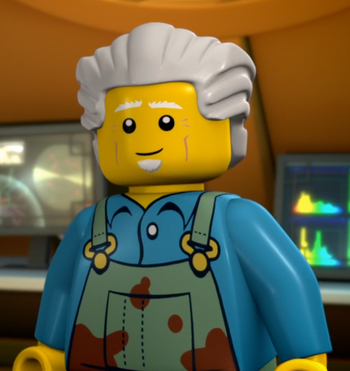 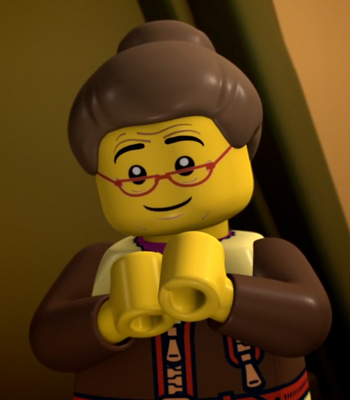 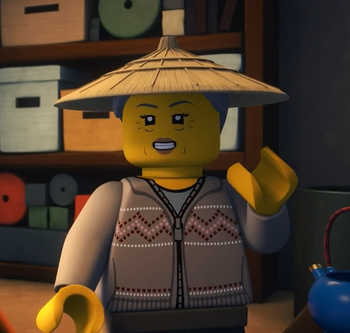 An elderly lady that owns a tea shop in Ninjago. She has knowledge of all sorts of brews, including the dimension hopping Traveler's Tea. In Season 9, it is revealed she is an Oni.

Cole's father, a singer with the Royal Blacksmiths. 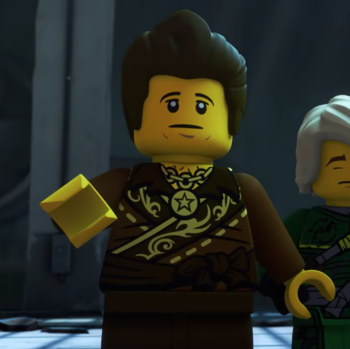 A cocky kung-fu "Sensei" who allows the Ninja to train Lloyd at his Dojo, entitled "Dareth's Mojo Dojo." He is revealed to have lied about his kung-fu claims. 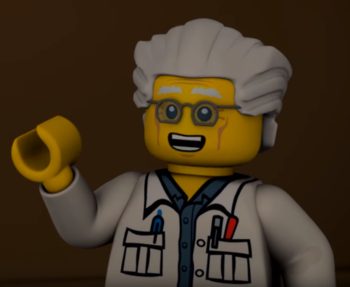 Zane's father, or rather, his creator. 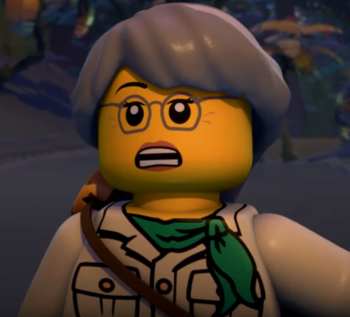 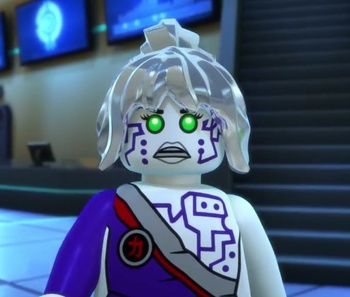 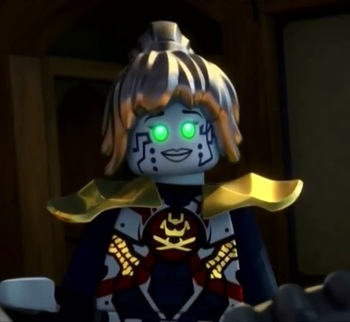 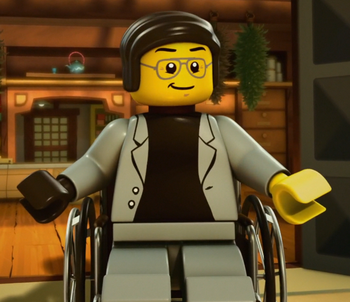 The head of Borg Industries and the creator of P.I.X.A.L. He is brilliant scientist who helped rebuild Ninjago City into the technologically advanced New Ninjago City. 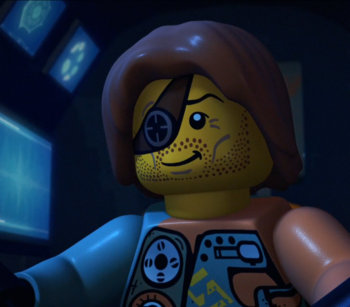 Ronin is a selfish yet skilled thief and bounty hunter, whose deal with the Soul Archer caused him to become involved in the Ninja's conflict with Morro and the Ghost Army. Initially siding with whoever he thought would save his skin, Ronin eventually returned, fully committed, to help fight the Ghost Army alongside the Ninja at the Battle of Stiix. Ronin returned later on, as more of a neutral party.

A kid who broke both of his legs training to become a ninja. He is visited in the hospital by the ninja and made the honorary "Purple Ninja." His appearance from Season 11 onwards has him become older and is now working as a paperboy. 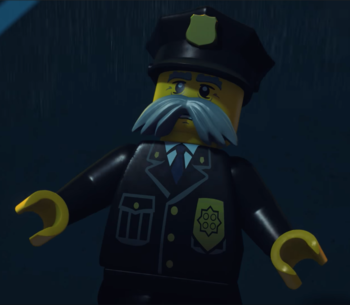 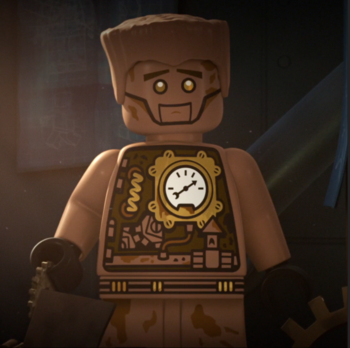 The prototype of Zane found in the basement of Dr. Julien's lab. 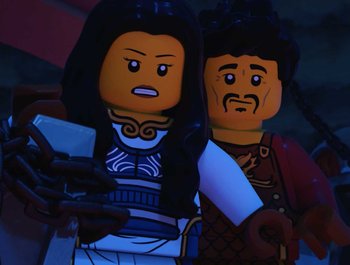 Kai and Nya's parents, and the original Elemental Masters of Fire and Water.

A famous explorer known for his many past exploits.

The leader of the paperboys. She shows Nelson the ropes and pratfalls of the job while teaching him tricks to avoid the dangers that assault Ninjago City on a regular basis.

The leader of the village located near the Great Lake in the Never-Realm. 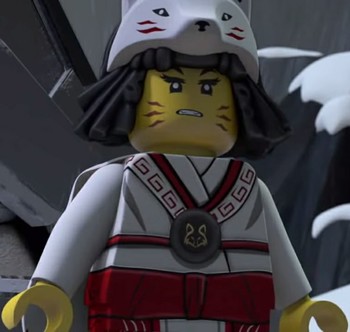 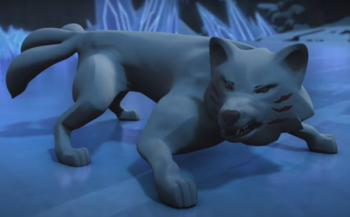 A girl that is the last of the Formlings, a race of shapeshifters in the Never-Realm. She is able to turn into a wolf. She seeks revenge on the Ice Emperor for freezing the rest of her kind and teams up with Lloyd to do so.

Kataru
Debut: "Secret of the Wolf"
Voiced by: Cole Howard

Akita's brother, and a prisoner in the Ice Emperor's dungeon.

A yeti who watches over the Traveller’s Tree in the Never-Realm.

A group of Prime Empire players who style themselves after Jay. They help Scott stay hidden from Unagami in exchange for him fixing their vehicles and weapons.

A mysterious Prime Empire player living in a hidden corner of the game while hiding from Unagami, remaining so using an undetectable barrier and with the help of the League of Jay. He's revealed to be a former video game tester for Milton Dyer's company, and the first person to play Prime Empire. He was trapped inside the game when Unagami heard him say he wanted a bigger challenge and invited him in.

Okino
Debut: "I Am Okino"
Voiced by: Alessandro Juliani

A Prime Empire NPC who resides in Terra Karana, a samurai helping to guide players though various dangers to obtain the Keytana hidden in the Maze of the Red Dragon.

A Prime Empire NPC who competes in the Speedway Five Billion, trying and failing to win at least once without crashing.

Milton Dyer
First mentioned: "Once and for all"
Debut: "Ninjago Confidential"
Voiced by: Mark Hildreth

The elusive and enigmatic creator of Prime Empire.

Princess Vania
Debut: "Into the Dark"
Voiced by: Sabrina Pitre

The princess and eventually queen of Shintaro.

Chompy
Debut: "Into the Dark"
Voiced by: N/A

One of the races who live in Shintaro's underground alongside the Geckles.

Debut: "The Worst Rescue Ever"
Voiced by: Michael Adamthwaite

A Munce who is forced to mine vengestone for the Skull Sorcerer until he is freed by the ninja.

Debut: "Queen of the Munce"
Voiced by: Tabitha St. Germain

The reigning queen of the Munce, until she temporarily passes leadership onto Nya.

One of the races who live in Shintaro's underground alongside the Munce.

Debut: "Into the Dark"
Voiced by: Brian Drummond

A Geckle who wears a locket given to him by Lily.

The leader of the Geckles, until he temporarily passes the leadership off to Kai.

A team of adventurers hired by King Vangelis years ago to investigate the dungeons of Shintaro and retrieve the Skull of Hazza D'ur, only for them to be betrayed and cast deep beneath the mountain. They join forces with Cole and the other ninja to help take down the Skull Sorcerer. Their team consists of Korgran the warrior, Fungus the sorcerer, Plundar the thief, and Adam the giant spider.

Cole's mother, long deceased by the time we first see him, and the Elemental Master of Earth.

An explorer who was stranded on the Island of the Keepers years ago when his hot air balloon was blown off course into the Storm Belt. He managed to escape the island, although repeated lightning strikes left him with a case of retrograde amnesia. He is asked by the ninja to help them get through the Storm Belt to rescue Master Wu, Misako, and Clutch Powers from the Island of the Keepers.

Zippy
Debut: "The Keepers of the Amulet"
Voiced by: Brian Drummond

A hyperactive dragon living on the Island of the Keepers who befriends the ninja.

The former king of Merlopia, the father of Kalmaar and the adoptive father of Benthomaar. He is fatally injured by Kalmaar trying to stop his son from awakening Wojira.

The adopted son of King Trimaar and the adoptive brother of Kalmaar. He assists the ninja with stopping Kalmaar after the latter kills King Trimaar.

The first Elemental Master of Water and Nya's ancestor, a Merlopian who long ago fought alongside the First Spinjitzu Master and merged with the Endless Sea in order to defeat Wojira.