Daughter of Kōga's leader, Kandō Ueno, and Iga's former leader Tanba Momochi's younger sister Kagari. A symbol of peace between the two factions, she has been brought up carefully and has lived a sheltered life. Because of that, she is an innocent, unfamiliar with the ways of the world. She aspires to contribute to her clan and her people, training diligently.

After losing his family, Gekkamaru was adopted by the protagonist's family along with his younger brother when he was three. Assigned to be the Enju's bodyguard, Gekkamaru has proven time and again to be loyal and steadfast. He is known to be one of the most skilled and reliable ninja Kōga has. Gekkamaru is completely devoted to his master and can sometimes be overprotective. 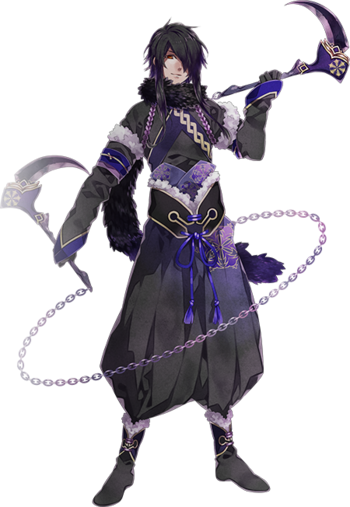 Gekkamaru's younger brother and Enju's foster brother. Right after he was born, he and Gekkamaru were taken in by her family. Cheerful, carefree and clever, Kuroyuki can also be quite cunning. He was sent away on an extended mission when he was eight, and after 8 years, has finally returned.

The son of the late leader of Iga, Tanba Momochi, Enju's cousin. After losing his family and clan in the Tenshou Iga War at the age of five, he joined Kōga with his surviving people. Since he is the son of the Head Shinobi of the fallen Iga, he's naturally observant and calm. His skills as a shinobi are eminent in Kōga, as he's also a teacher for Enju and the others.

Known as the right-hand-man to Ieyasu Tokugawa and the leader of the Tokugawa shinobi, Hanzō is one of the few surviving members of the now-destroyed Iga clan. Calm, blunt and efficient, he has made a name for himself as the greatest shinobi in Japan and is looked at with great admiration by Enju and her peers.

An elusive and infamous thief with the peculiar habit of leaving a warning note in the homes he will rob, listing the exact item he intends to steal. Though charming and laid-back, Goemon is considered highly dangerous by the state for his incredible skill and anonymity. A team of Kōga shinobi, consisting of Enju and her friends, is hired to sleuth out information aiding in his capture.

Enju's father and leader of the Koga clan.

One of Enju's childhood friends who is a ninja of Koga.

Another one of Enju's friends, also a ninja of Koga.

Another one of Enju's friends and the youngest of them.

An Influential Daimyo who rules the Kanto Region and one of the Five Elders. He owns his own shinobi clan which is currently lead by Hanzō Hattori.