Characters / Night at the Museum

Tropes for the Night at the Museum characters. 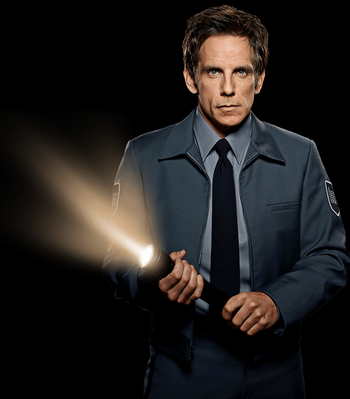 Played by: Jake Cherry (Movie 1, Battle at the Smithsonian), Skyler Gisondo (Secret of the Tomb)

This version of America’s 26th president is a wax statue.

A wax figure of the Native American woman that helped Lewis and Clark explore the United States.

A wax version of the famed Hun warlord.

A minature cowboy who is part of an exibit on Manifest Destiny.

A minature Roman soldier from an exhibit on Roman Times.

Played by: Crystal the Monkey

A capuchin monkey who delights in mischief.

A pharaoh of an Ancient Egyptian era. His tablet is what causes the exhibits to come to life.

The museum director. He is a very nice person.

The skelleton of an enormous Tyrannosaurus rex at the entrance of the museum.

A statue of Easter Island, or moai, with a love for "gum-gums".

The night guard that Larry replaces.

One of the retiring guards along with Gus and Cecil.

One of the retiring guards along with Reginald and Cecil.

The museum's receptionist and a lover of History.

A Neanderthal wax statue that replaced the missing one from the first film. McPhee ordered to be made to resemble Larry and considers the night guard as his father.

A wax statue of the famous female aviator that vanished in 1937.

The elder brother of Ahkmenrah. He is the main antagonist of the second film.

A wax statue of the famous 7th Cavalry general.

The Chicago Italian-American gangster from the 1930's.

A wax figure of the terrible Russian leader.

A wax figure of the diminutive Emperor of France.

The statue of the 16th President of the United States that sits in the Lincoln Memorial in Washington D.C.

A group of small bobblehead figures of the revered German genius. They help Larry resolving the combination of the Tablet.

Played by: Crystal the Monkey

A wax figure of the legendary Arthurian knight.

A night guard of the British Museum.