These are all of the various characters from Nickelodeon Fanon 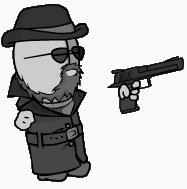 John the Marksman, frequently shortened to John or JM and alternatively known as General John in SOD

, is a major, minor, and supporting character in many television series and video games in Nickelodeon Fanon. John the Marksman is typically portrayed in most of his appearances as an inscrutable marksman. When he was one day pronounced with an incurable brain tumor, a young physician saved his life by immersing John in an alchemical froth of poisons and acids known as Pantserachotoxin. The toxin not only saved his life, but also granted John many abilities such as prodigious longevity. John the Marksman was created by KM

. He is often seen as the Batman of the group, being smart, cunning, skilled, and serious. Signature Appearence: The ACS

Bagel is a major protagonist in various shows in Nickelodeon Fanon. Bagel is a living bagel who comes from the planet of Food Topia. When an immense creature known as the Space Mouth threatened the existence of Bagel's home planet Food Topia, the President of Food Topia decided to send 20 Foodtopian babies to different planets to continue their dying race. Bagel was one of those babies and he was subsequently sent to Earth, where he would encounter friendly and hostile people, and auspicious and misfortunate events. Bagel was created and voiced by IAmBagel

Wario (no, not that Wario) is a character in Nickelodeon Fanon notably included in cartoons such as The ACS and The Wario Show

. He is 21-years-old in these shows and quite greedy yet honorous. He's very crazy and fun too, hanging out with Bagel and Web in his free time. Signature Appearence: The ACS

Web
Web is a two-dimensional programmed sprite. Web is also a mix of the human race and the Lakitus species, despite the fact that he was never fundamentally born, but produced. Web has made cameos and appearances in a cluster of other shows in the Nickelodeon Fanonverse. Web was created by KingOfSpriters12

.
Invader Rob
An Irken, who, unlike most Irkens, doesn't destroy planets. He acts fearless and understanding, but is also quite rude and has a big ego, usually when it comes to his knowledge of technology.
Matt Boo
A Boo who, unlike most Boos is quite cheerful, carefree, caring, happy-go-lucky, and childish.

Doug
A little green puffball creature. He is known to be very brave and take any challenge head-on, but he is usually full of himself and always puts himself ahead of things rather than other people.
Super Saiyan Kirby
Collector
Y-Guy
A 12-year-old Letter Creature, who often protects his hometown Crazville from Professor Carrotstein. He is often described as a calm and good-hearted character. He is generally goofy and random most of the time, but he is sometimes serious,usually when fighting villains. Y-Guy usually makes more dangerous risks while going on adventures, much to his friend's dismay, who usually want to take the easy way out. Y-Guy is also often enthusiastic.
Nozus
Nozus is one of the members of the ACS. He is a dutiful and selfless individual, caring only for the fate of the society. Nozus was born in a farm on the outskirts of Nicktropolis, in a bucolic settlement called Nick Town

. At a young age, Nozus showed remarkable intelligence, reading and assimilating the works of Einstein, Planck and Feynman, Bohr, and the pantheon of theoretic physics, all at the age of seven. He studied advanced science, space and time, and eventually went to Yale on a merit scholarship in 2005. Nozus can sometimes be sadistic and manipulative, yet polite with a dry sense of humor. Through keen observation, Nozus can quickly determine the situation at hand. Even when up against a stronger opponent, he can gain an advantage by quickly exploiting their weaknesses. Signature Appearence: The ACS

LT Fan
Professor Carrotstein
Oblivion
Oblivion is the alternate future version of John the Marksman. Oblivion is considered one of the most dangerous and powerful enemies John has had difficulty facing. Oblivion made his debut in some fanfic, where John accidentally went to the future and found that he - Oblivion - had ruled the universe. After stopping Oblivion, John went back to his time, but unknowingly to him, Oblivion followed behind.
The Ultimate Entity
A villain who carries the DNA of every single villain in the Fanonverse. Unlike most villains, she doesn't want to rule anything, she just wants destruction and agony.
Perfect
Perfect is the leader of a Space Terrorist organization called "Order". Perfect despises anything that he thinks is not "perfect", and chooses to destroy those things, with those things mostly being planets and species.
Looney Theomastix
Looney Theomastix is a megalomaniac and warmongerer. LT's goal is to absorb the knowledge and history out of every planet he encounters and then destroy them, assimilating technology from each destroyed civilization and upgrading himself each time. LT is able to teleport people to anywhere he wants them to go. LT can also replicate the special abilities of any super-beings in his immediate proximity. With every being encountered, LT becomes even more powerful and virtually unstoppable.