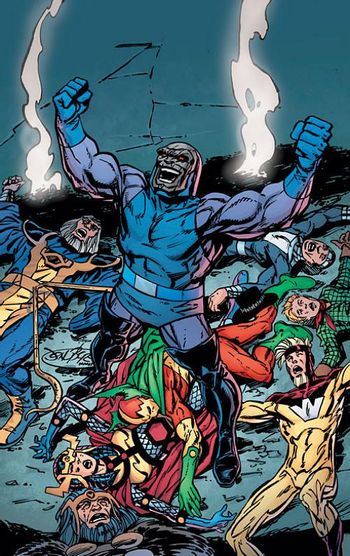 Does more need to be said about him?

“I am the Revelation! The Tiger-Force at the core of all things! When you cry out in your dreams — it is Darkseid that you see!”
—Darkseid, The Forever People Vol. 1 #3

Created by Jack Kirby, Darkseid (pronounced "dark-side") stands tall among the New Gods, ruling dread Apokolips as he wages a constant war for control of the universe and possession of the Anti-Life Equation, which will allow him to either conquer the universe or destroy it (or both), Depending on the Writer.

He first appeared in Superman's Pal, Jimmy Olsen #134 (December, 1970) and later in New Gods and related titles. He was a character within the Fourth World, a Jack Kirby sub-universe of the DC Universe that was originally supposed to be self-contained and finite. Executive Meddling prevented the conclusion that Kirby originally intended, which would have killed most of the New Gods and ended their storylines, and Darkseid was drafted into the DCU at large along with the rest of the New Gods, with his first major usage being in the Legion of Super-Heroes storyline The Great Darkness Saga, written by Paul Levitz.

In popular culture, Darkseid hit the big time in the 1980s when the toy company, Kenner, decided he was perfect for their Super Powers action figure line as the product line's Big Bad who was effectively Darth Vader and Emperor Palpatine in one as a believable challenge for even Superman.

Darkseid has served as the Big Bad for numerous DCU heroes and titles in the decades since his first appearance. Since Jack Kirby was never able to introduce the conclusion to the New Gods that he originally wanted, Darkseid has often drifted without clearly defined goals and roles within the DCU, and at times this results in rather drastic Badass Decay when authors try to fit him into stories for which he was not originally intended. This led writer Grant Morrison to put an end to it in Final Crisis — a Crisis Crossover in which Darkseid not only regains his badassery and motives, but even manages to Take A Level In Badass and become a God of Evil, who's been killing entire Universes just by existing.

For his Self-Demonstrating Article, go here.

Darkseid has been featured in several works outside comics, primarily serving as an opponent to Superman and more recently to the Justice League, while continuing his search for the Anti-Life Equation.

Waldorf: So I hear this guy is always looking for the Anti-Life Equation.
Statler: He sure came to the right place. Nobody has a life around here!
Both: Do-ho-ho-ho-ho-ho-ho-hoh!
Darkseid: What fools are these? So weary of life that they take the name of Darkseid, My Name, in vain? Are you truly so feeble as to not value your miserable existence? Know then that your suffering will be slow, agonizing, and painful beyond recognition. Blood will be spilt, armies will fall, and all of existence will soon know that Darkseid IS. As for you fools, it is my will that you will receive the honor of learning such knowledge firsthand. (Activates Omega Effect)
Both: Ho-ho-ho-OH CRAP!