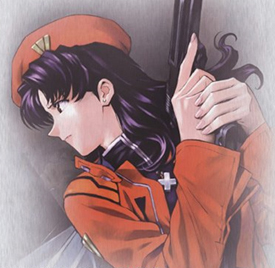 "The hedgehog's dilemma...the nearer we get, the deeper we hurt each other..."

Misato is the beautiful late-twenties Bunny-Ears Lawyer who is appointed to be the guardian and personal tutor for Shinji and Asuka, as well as the pilots' tactical commander in battle.

Misato is a study in contrasts. When she's on the job, she's a force to be reckoned with — tough, smart, cunning, hard-nosed, determined, ultra-competent in strategy and tactics (particularly as the series nears its end), and an all-around Action Girl. At home, it's a completely different story. She guzzles beer, wears skimpy clothes, has a pet genetically-engineered penguin named Pen-Pen who can beat her at chess, and is a borderline Cordon Bleugh Chef. She's cheerful, optimistic, ditzy, hedonistic, and quite the slob. She even has her own theme music for these scenes, which sounds like a sort of musical paraphrase of all the wacky 1960s sitcom theme music you ever heard.

As the series progresses, it's gradually revealed that these contrasts in personality are two halves of a facade. Despite her age, Misato, like Shinji, is a broken-hearted child, striving to live up to crushing responsibilities, yearning for love and acceptance, and trying desperately to hide deep sadness, loneliness, and fear (by episode 21, after Ryōji Kaji dies, the mask cracks). Despite her lighter side, her insecurities cause her to be childish, touchy, and short-tempered; for instance, she hates being teased yet loves to tease people, especially Shinji. Most of her problems come from conflicting feelings toward her father, who neglected her and her mother in favor of his work but sacrificed his life to save hers during Second Impact... an event that she's all but certain he had a hand in causing, but as a horrific accident.

She hates the Angels, blaming them for her father's death and her own near-fatal injuries in the cataclysm of 2000, and that hatred drives her to amazing feats of cunning to defeat them. Unfortunately, it also causes her to misinterpret the reasons why Shinji acts the way he does when he pilots Unit-01, and drives her to say the worst possible things at the worst possible moment to Shinji near the end of episode 24, in the aftermath of Tabris' attack on NERV (see Kaworu's entry for details), traumatizing him even further and pushing him into his final slide toward a nervous breakdown.

She and Shinji become very close, perhaps even coming to love one another, as the series goes on — though not in any openly romantic way. She even kisses him just before her own heartbreaking heroic death, though her motivations for doing so are subject to debate. It is very sad to watch, as the series goes on, that whenever Shinji is in the most pain and needs Misato the most, she's either wallowing in drunken self-pity, angry that he doesn't share her rage, or her efforts are misguided and seemingly inappropriate, and whenever Misato is in the most pain and needs Shinji the most, he can't handle seeing her in pain and tries to ignore her — not because he doesn't care, but because he doesn't know what to say or do and fears he'll only hurt her more if he tries. note See quote above; this is what they describe as the Hedgehog Dilemma, and is the best way to describe her relationship with Shinji.

Her on-again, off-again boyfriend is the aforementioned Ryōji Kaji; their relationship, at least at first, is all about Belligerent Sexual Tension. 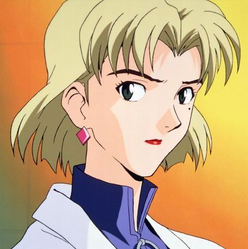 "The interaction of men and women isn't very logical."

Ritsuko is NERV's resident computer scientist, tasked with the development and upkeep of the MAGI supercomputers and research on the Evas. She, Misato, and Kaji have been friends since college, and she often acts as a foil to Misato. She is also something of a Crazy Cat Lady. She dyes her hair blonde — late in the series we see her in a Flash Back as a teenage girl with dark brown hair.

Ritsuko is extremely intelligent and competent, but has a coldly logical and often cynical attitude, and can be callous and petty. She also doesn't seem to really understand human nature, and is in some ways childishly naive. Secretly, she is romantically involved with Gendō Ikari, as was her mother Naoko before her death ten years before the series opens. Despite Gendō's ambiguous intentions, she has convinced herself both that he loves her and that Rei is actually her rival for his romantic attentions, and she deeply resents Rei because of this. She also shows little concern for the lives of the pilots during battle, and is ready to sacrifice them should such a tactic seem necessary, a position Misato vehemently disagrees with. 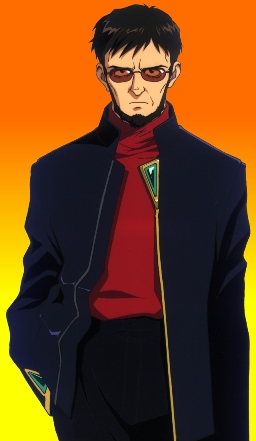 "There is no one else who can pilot the Evas. As long as they survive, that is what I'll have them do."

Gendo Ikari (né Rokubungi) is the secretive head of NERV and Shinji Ikari's estranged father. While he is not the series' true Big Bad, he is one of the main antagonists. He is NERV's liaison to SEELE, and a member of SEELE's Committee for Human Instrumentality, but in reality he is running his own scenario which runs counter to SEELE's plans. To see this plan succeed, he is more than willing to use and betray everyone around him without hesitation, from his own son to NERV's central personnel to SEELE itself. He is confident, brooding, self-possessed, self-controlled, cunning, intimidating, cold-blooded, amoral, humorless, and utterly ruthless.

Yet, for all of this, the series gradually makes clear that Gendo's primary motivation for all of his bastardry is, in fact, love. In college, he met and fell in love with Yui Ikari; while it's possible that he had ulterior motives for approaching her at first, his love for her was genuine, so much so that he took her surname when they married. After Yui's contact experiment with Unit 01, Gendo became focused on a plan to reunite himself and Yui through a modified version of SEELE's plans for Third Impact that would involve the Angel Adam and the Evangelion which now held Yui's soul. Everything that he does in the series is just step after step toward seeing this plan to completion.

For some, Gendō appears to be quite the ladies' man. First, Yui fell in love with him, and he with Yui. After Yui's death, he took Naoko Akagi as a lover, then her daughter Ritsuko after her death, although in both cases it's revealed that these trysts were solely to use them for their knowledge. He also has a brief and thin friendship with Rei, which is a sore point with Ritsuko; he shows more concern for Rei than he does for his actual son, but to Ritsuko (and the audience) the whole thing seems to have some unpleasant undertones.

Gendo's abandonment of Shinji shortly after Yui's death is one of the key factors behind Shinji's emotional problems, and over the course of the series Gendo does little to bridge that gap. Indeed, Gendō and Shinji spend as much time opposing each other as they do fighting the Angels. He is merciless where Shinji is kind, confident where Shinji is fearful, calculating where Shinji is hopelessly naive. He is Shinji's twisted and sinister mirror image, and it's obvious that on some level there is an Oedipal conflict taking place. What the story doesn't reveal until End of Evangelion is just how similar Gendo and Shinji really are under all their differences.

Gendo's depiction in the manga differs somewhat from the original. His villainous traits are more emphasized, while the glimpses behind his harsh façade are downplayed, to the point where his character has a hint of madness and wilful cruelty to it, rather than emotional distance and calculating pragmatism, especially when it comes to his ultimate goal, which, as it turns out, is not quite the same as in the anime. 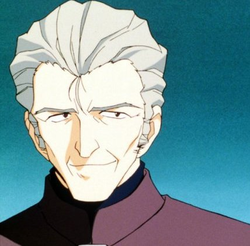 "As long as one soul still exists, it will be eternal proof that Mankind once existed."

Dr. Fuyutsuki is the Deputy Commander of NERV, Gendō Ikari's right-hand man, and is as close to a confidante as Gendō will allow. In his life before NERV, he was a college professor at Tokyo University, teaching in the somewhat obscure field of metaphysical biology. Yui Ikari was one of his interns, and he carried a torch for her for some time. He never acted on his feelings, but was shocked when Yui told him that she was marrying Gendō. Years later, Fuyutsuki discovered the truth of Second Impact and confronted Gendō, but was persuaded by Gendō to assist him with the Eva project rather than exposing the coverup.

Fuyutsuki is far more ethical and a much more decent human being than Gendō, but he has allowed himself to be carried along by events until it is too late to act on his ever-growing misgivings. His being The Stoic (and in comedic situations, The Comically Serious) doesn't exactly help. 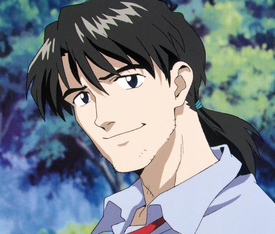 "The gulf dividing men and women is deeper and wider than any ocean."

Ponytailed, Perma-Stubble-ed, and confident, Kaji is half James Bond and half Handsome Lech — and he switches back and forth frequently and without warning. Exactly whose side he's on in the wheels-within-wheels world of Evangelion is almost impossible to determine. He seems to be a Double Agent at the very least; he may even be working for more than two powerful entities, although his own personal drive to know the truth of Second Impact, the Eva project, and the rest of SEELE and NERV's secrets are his truest motivation.

He and Misato were lovers in college, but by the start of the series have been broken up for several years. Asuka has a crush on him and is anything but subtle about it, but he does not take her up on her premature offers. It doesn't help that, in some continuities, he's strongly hinted to have been her guardian after her mother's death. Much to Misato's chagrin, Kaji flirts with several of the female staff, including Ritsuko and Maya. As the series progresses, Kaji and Misato renew their stormy relationship, and Kaji briefly becomes more of a father to Shinji than Gendō ever was. Tragically, he digs too deep when he rescues Fuyutsuki from SEELE after they kidnapped the old man shortly after the 14th Angel. SEELE (or NERV) responds by having him assassinated.

In the manga, Kaji's role is mostly unchanged, but he is given a tragic backstory: he was a war orphan and Street Urchin who carries a huge burden of guilt for ratting out his friends to soldiers so he wouldn't be killed for stealing their supplies. 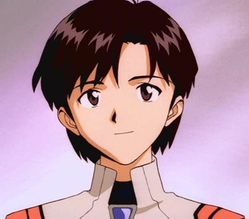 Dr. Fuyutsuki isn't the only one in love with someone he can never have; there is also Maya Ibuki, a shy, pretty, and kinda tomboyish woman in her early twenties. She is Ritsuko's assistant, and is very much in love with her, although this isn't revealed until her final scenes in the story. She is a very sympathetic character — bright, sweet, and one of the few happy, well-adjusted, and normal characters, though with this bunch, that isn't saying much. 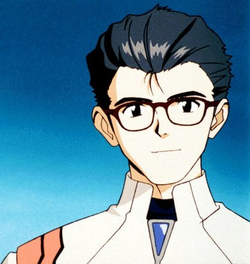 "It's okay, Major... besides, dying beside you wouldn't be a bad way to go out."

A geeky, bespectacled computer technician in the command center and member of the Tactical Operations division; he is Misato Katsuragi's chief aide, and in love with her, but is too shy to approach her. She is aware of his feelings and feels no shame about manipulating him to gain information (or to do her laundry), but otherwise she sees him as a friend and contact. 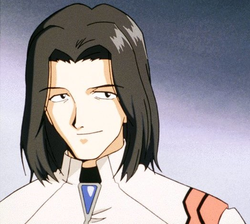 The long-haired, guitar-playing computer technician in the command center. Unlike everyone else in the series he seems to have no one he truly cares about, although he appears to get along well with Maya and Hyuga.