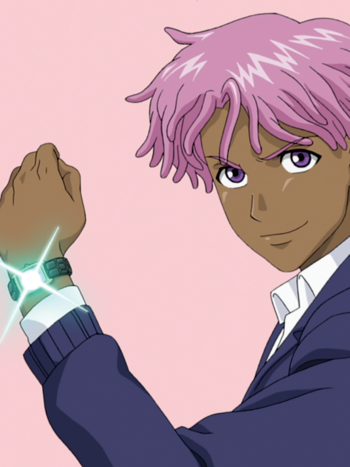 I'm not obsessed with clothes. I'm just an elegant man of taste.

The protagonist, a "magistocrat" more concerned about his status as an eligible bachelor than his exorcism duties. The latest in a long and proud line of demon slayers, Kaz has strong magical abilities that allow him to detect demonic possession, expel demonic presences, and battle even the most formidable of demons on an even footing. For hundreds of years it's been his family's duty to protect Neo Yokio from demonic threats. Despite this, Kaz tends to treat his magical duties as a chore he'd rather put off — it's a good thing he's got his Aunt Agatha to keep him in line, and his butler Charles to keep him even-keeled . Kaz also has a taste for expensive clothes and a tendency towards fits of dramatic melancholy, but ultimately his heart's in the right place. 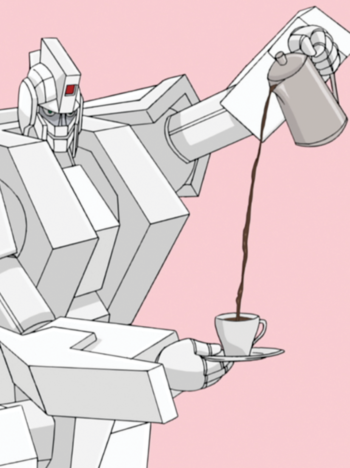 Take a deep breath sir. Just as this calm pool of water sits at the center of a chaotic metropolis, you too have an inner reserve of peace and tranquility.

Kaz's robotic butler, friend, confidant, and closest thing to a jet pack Neo Yokio has to offer. Charles often acts as the calm, British voice of reason for Kaz, encouraging him to think his decisions through before taking any action. Kaz purchased Charles second-hand, and he seems to have very little idea as to how mechabutlers work. 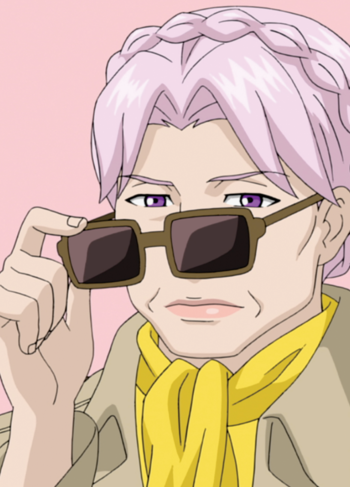 You need to work to support your wretched lifestyle!

Kaz's aunt - a strict, no-nonsense woman who runs the family business. Agatha tends to put business before personal commitments, often scheduling jobs for Kaz despite his protests (or prior commitments). She and Kaz have a close if somewhat contentious relationship, with Agatha acting as Kaz's manager, motivator, and something of a mother figure. It's assumed that as a magistocrat she has powers similar to Kaz and Jeffrey, but as of yet she has not displayed them. 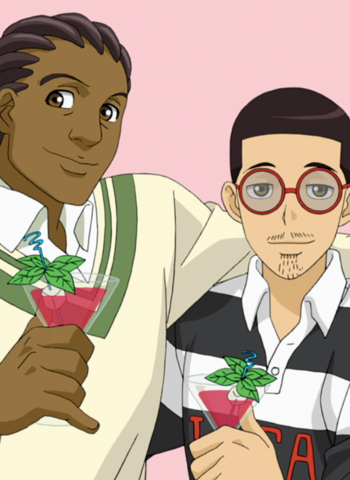 Can you feel the synergy?note Left: Lexy, Right: Gottlieb

The inseparable duo of Lexy and Gottlieb are Kaz's long time friends, field hockey teammates, and occasional partners in crime. The two seem to have known Kaz since their days at Easton Prep School and often accompany him to social events, casual brunches, and shenanigans. During the course of the series they patent a trendy new martini inspired by the caprese salad and open a two-seat bar in Neo Yokio's crowded drinking district. 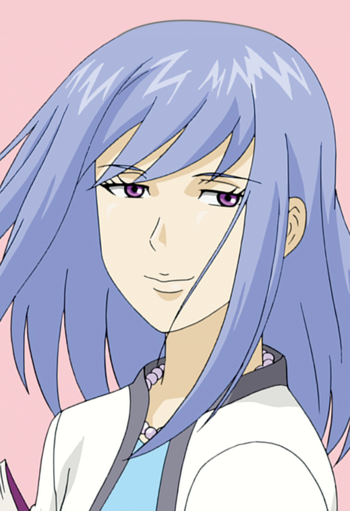 I'm done searching for meaning in the aesthetic cycles of commodities.

A socialite living in the expensive underwater neighborhood below 14th Street, Helena St. Tessero is Neo Yokio's premiere fashion blogger... or she was, until a demonic possession, near drowning, and a nasty fall down a flight of stairs at the start of the series. The incident left her so shaken that she completely abandoned her blog, her fans, and her passion for fashion, turning her critical eye instead to Neo Yokio's culture of materialistic excess and extreme class stratification. She and Kaz clash numerous times during the first season, with Helena decrying Kaz as a "lapdog of the bourgeois" and Kaz arraigning her as a hypocritical rich girl, but they still maintain a friendly relationship. 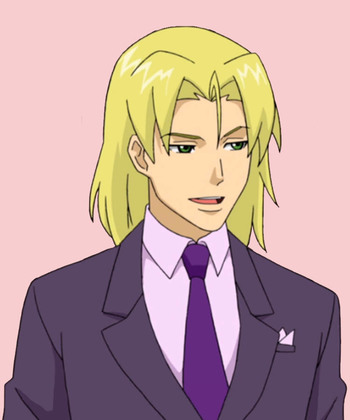 I love being in public with my hair wet. I feel like a Gucci model.

Kaz's rival in Field Hockey and for the top spot on the Bachelor Board, Arcangelo is classic old money Neo Yokio. Conceited and self-centered, Arcangelo wears his privilege on his sleeve like an vintage Rolex, and makes no secret of his rivalry with Kaz. He's got a gaggle of followers called the "East Side Gentlemen" who follow him around in order to laugh at his jokes, but doesn't seem to have many close friends. 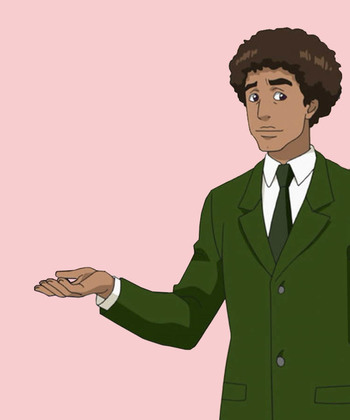 An employee at the Bergdorf Goodman department store and an ardent fan of Kaz.

Helena's biggest fans, the Helenists are three students of Easton Prep School (Kaz's alma mater) who live and breathe the doctrine of Helena St. Tessero's fashion blog. But how far would they be willing to go to imitate their idol?

An internationally renowned pop star and newly appointed cultural ambassador for Neo Yokio, Sailor is a sweet girl with a thick "North Cackalacka" accent and a (possibly romantic) interest in the suddenly single Kaz Kaan.

A professor working at Easton Prep School and one of Kaz's former teachers. When occult activity begins to tarnish the vaunted institution's sterling reputation, Professor Muhly falls under suspicion of being the instigator. It's up to Kaz to investigate whether or not his old teacher is the demon sympathizer.

Working directly for the founding families of Neo Yokio, the Remembrancer operates to "protect the interests" of the elite. He wears the robes and wig of a judge, and takes to following Kaz once he grows suspicious of the young Magistocrat's involvement with a certain Helena St. Tessero... 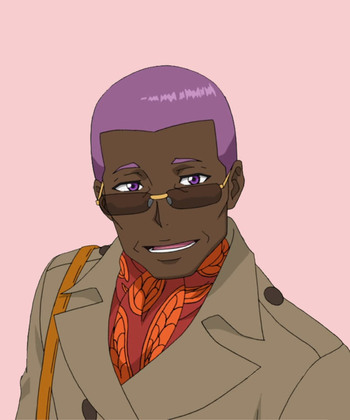 I am a writer, mon cheri.

Agatha's twin and Kaz's other aunt. Unlike her sister Agatha, Angelique is laid-back and pleasant. She despises Neo Yokio and spends most of her time in Paris.

Thusfar Angelique has only appeared in the Christmas Episode "Pink Christmas" as a character in the story Charles tells to a feverish Kaz, so all information about her is to be taken with a grain of salt.

Kaz's uncle and the father of Jeffrey, Albert Kaan was in charge of maintaining the Kaan family's home in the Hamptons.

Kaz's unrefined cousin from the Hamptons and the son of Uncle Albert. Jeffrey's Magistocratic powers take the form of water magic, allowing Jeffrey to control and enchant water... which he uses to clean pools. 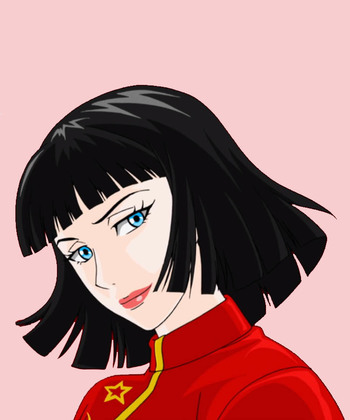 A professional race car driver from the Soviet Union, Mila's one of the few entrants brave enough to take on the notoriously difficult Neo Yokio Grand Prix. And it's not just the dangers of the course that she's willing to brave: the contestants are just as nasty. According to the French-Canadian driver Dave 1, she's "stolen" quite a few races from him, and he's gunning for her in the next Prix.

Charles' pilot, Sadie could not be more different from the mecha she pilots: she's a foul-mouthed geriatric shortstack with a painfully thick British twang who isn't afraid to give Kaz a piece of her mind.