Characters / Neither a Bird nor a Plane, it's Deku!: Monstars

In General
The most important members of Class 1-A, not counting Katsuki Bakugou. Through a series of circumstances, they all became close friends and now support each other on their journey to become Heroes.
Izuku Midoriya - Superman

A wealthy socialite and a prospective Hero student who is also applying to U.A. Midoriya runs into her in downtown Nagoya while looking for a place to eat lunch. After helping her retrieve her phone after it fell down a storm drain, they bond over an appreciation for Princess Shazam and bowls of katsudon.

Her Quirk, "Creation", allows her to turn the fats in her body into virtually any non-living object, provided that she has enough lipids in her body and she knows that object's precise chemical formula. 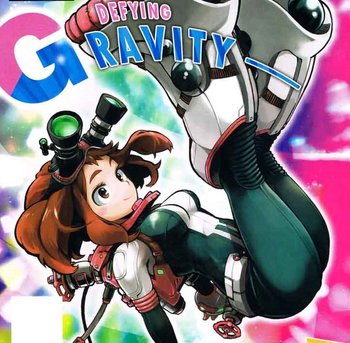 A brunette that Midoriya meets while on his way to the U.A. Entrance Exam. She's a little nervous but a very warm-hearted young lady who keeps Midoriya from falling flat on his face.

Her metahuman ability allows her to nullify the effects of gravity on anything she touches with all five of her fingertips.

An earnest young man from a prestigious line of Heroes. He antagonizes Midoriya at the outset of the U.A. Entrance Exam before being inspired by his heroics to do more than just destroy robots.

His Quirk, "Engine", gives him engine-like structures in his calves that give him incredible speed and kicking strength.

A tomboyish girl that Midoriya runs into in the midst of the U.A. Entrance Exam. Confident, assertive, and outgoing, she is prone to taking charge in stressful situations while also making sure that the people around her are safe.

Kendou's Quirk, "Big Fist", lets her greatly increase the size of her hands and grants her a proportional amount of strength.