Characters / Neither a Bird, nor a Plane, it's Deku!: Hero Course, Class 1-A 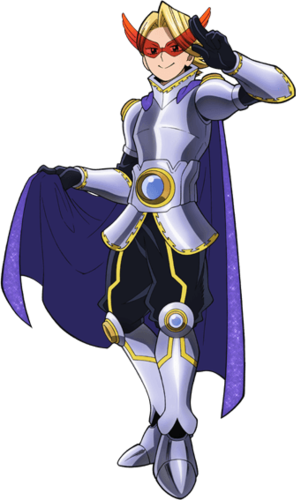 A flamboyant boy who seems to enjoy French culture. His Quirk, "Navel Laser", allows him to shoot a powerful laser from his navel. But using it for more than a second can cause stomach cramps or even make it cave in on itself.

An energetic girl with both a genetic mutation and a Quirk. She hops between both lines before being tugged into the Quirk line by Kirishima. Her Quirk, "Combo Breaker", allows her to greatly increase the force of her kicks with every consecutive kick she lands in quick succession, but overuse can potentially break her legs. Her genetic mutation allows her to emit corrosive liquids from her body at will. She can manipulate the viscosity and potency of her acid. This also has the side effect of turning her skin pink and her sclera black.

A frog-like girl who takes the U.A. Entrance Exam. Her Metahuman ability gives her the ability to "do whatever a frog can", giving her powerful hind legs, a prehensile tongue, and other froggy traits.

See his entry on this page

A cheerful and bubbly girl who Midoriya helps out near the start of the U.A. Entrance Exam. Her Metahuman ability permanently renders her entire body invisible by refracting light, but doesn't affect her clothes.

See his entry on this page

An aloof girl with oddly shaped earlobes and a love for music. Her Quirk, "Earphone Jack", gives her earphone jacks for earlobes that she can manipulate at will. She can use them for attack and listen in through walls and across significant distances with them. She can also project the sound of her heartbeat through them, which can stun others if her jack is inserted directly into someone's ear.

A Hot-Blooded and spiky-haired boy, Midoriya helps him out during the U.A. Entrance Exam by freezing a two-point robot that was about to impale him with its stinger tail. His Quirk, "Hardening", allows him to harden his body, giving him extremely tough skin and sharpened fingernails that are perfect for close-range combat.

A quiet but well-built boy with a rock-like appearance and a love for nature. His Quirk, "Anivoice" allows him to communicate with and control animals, but he's rather quiet otherwise. 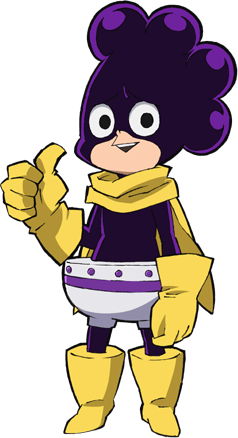 A diminutive lad with a head full of sticky purple balls. He has a fiendish appreciation for the female figure, but he still as a good heart underneath his flaky exterior. His Quirk, "Pop Off", allows him to pull off the sticky purple balls on his head which are each coated in a powerful adhesive. Pulling too many of them off at once will cause him to bleed from his scalp. 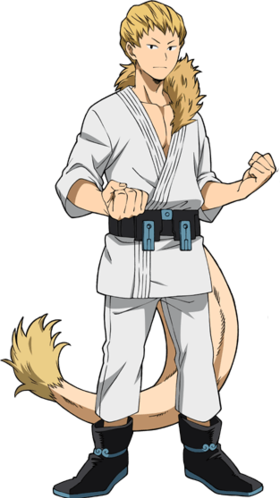 A plain-looking Metahuman who happens to take karate. His ability gives him a large, powerful prehensile tail.

A tall guy with a big smile and an optimistic attitude. His Quirk, "Tape", allows him to dispense an ultra-strong tape-like material that's coated with a strong adhesive from a protrusion on his arms. This makes him great at binding his opponents, holding objects together, or swinging through his environment, but overdoing it gives him dry skin. 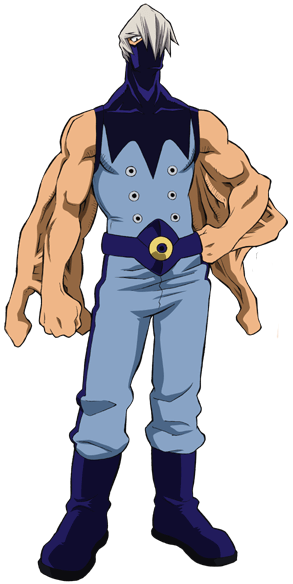 An intimidating boy with a heart of gold. His Quirk, "Dupli-Arms", gives him several arm-shaped tentacles that can be used to reproduce any part of his body at their tips, such as his eyes or his ears.
Fumikage Tokoyami

A serious and dramatic boy with the head of a bird. He entered U.A. as a magic user bound to a fifth-dimensional genie, Tskymi, whom Tokoyami attempts to name "Dark Shadow".

The son of Endeavor, the Number Two Hero. He's cold and stoic, declaring that he'll defeat Midoriya on the first day of school. Todoroki possesses a powerful Quirk called "Half-Cold, Half-Hot" that is a combination of his mother's ice Quirk and his father's fire Quirk, but he only willingly uses his ice side.