This character sheet lists all 3-A students who are not part of Ala Alba. 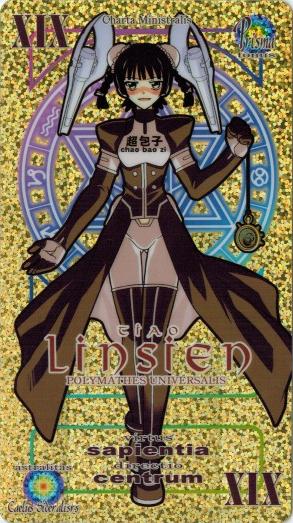 Chao Lingshen is class 3A's top scoring and multitalented student. She runs the successful business Chao Bao Zi, is talented in martial arts, a member of the Eastern medicine research group and the head of the Mahora quantum physics department. 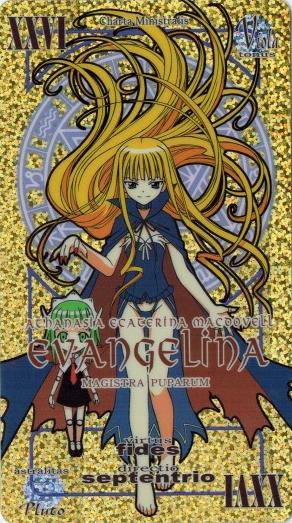 Evangeline is the first antagonist of the series and is an ancient and extremely powerful vampire stuck in the form of a ten-year-old girl. Thanks to Negi's father, she has been bound into the Mahora school grounds without any of her magical powers.

While Nagi initially intended to let her go in a few years, he first forgot to let her go and then vanished, leaving her both bitter and extremely bored. She picks a fight with Negi to relieve her frustration and potentially break the curse on her herself. Some time later, she becomes Negi's master and primary magic teacher. 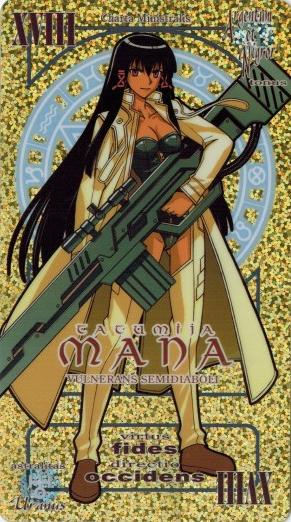 Mana is a supposedly ex-mercenary with a fondness for magical equipment and firearms. She is one of the four known martial arts masters of the class, along with Ku Fei, Setsuna and Kaede. She blatantly sells her services to the highest bidder, but despite her claims, she does seem to have her own sense of honor. Since her moral sense doesn't quite match up with Negi despite their mutual respect, the two can easily come into conflict. Mana looks much older than most of her classmates and cannot pass for her age or even as a high schooler. She has a rivalry with Kaede, and she and Setsuna are work colleagues.

Mana makes her first real appearance at the end of the Kyoto arc. She, along with Ku Fei and Kaede, arrive to deal with the oni army that Chigusa Amagasaki summoned, and support Setsuna and Asuna. 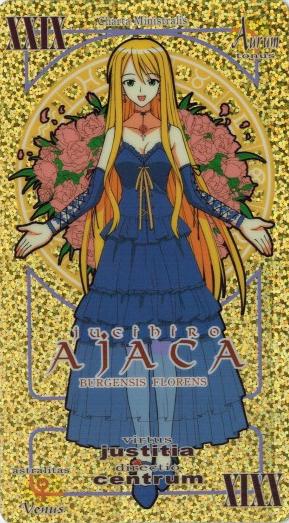 Ayaka is the Class Representative of 2/3-A, a filthy-rich lady, and Asuna's best friend and rival of sorts. She has a reputation as a Comedic Shotacon and intense reactions to Negi, though hints abound that she may be seeing him as a Replacement Goldfish for a stillborn little brother who would've been around Negi's age. Kotarō later moves into her room and the pair quite explicitly fail to get along as well as Ayaka and Negi do.

Towards the end of the series, she finally gets a pactio card from Negi, which allows her to "organize a meeting" with anyone, no matter who they are or how difficult they would be to reach. 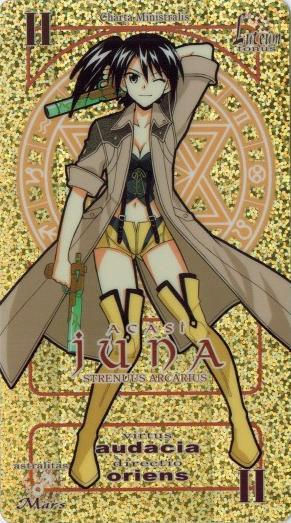 Of the entire class, Yūna is probably most qualified for the title of "Genki Girl" — mischievous and enthusiastic, her charisma translates into her constant role as ringleader of the class's hijinks. Her physical abilities are quite high, but despite being the daughter of a magic teacher she's in the dark about magic, most likely because she's too busy lusting over him to worry about his job. She is not a formal member of Ala Alba, but instead later gets wrapped up in their shenanigans.

She later gains a pactio herself, a pair of magic guns inherited from her mother: Iris Tormentum - the Seven-Color Guns. They allow her to enchant her bullets with all sorts of magic effects, actually making her quite useful in combat, even though she joined the front lines late in the series and can only handle mid-level foes. 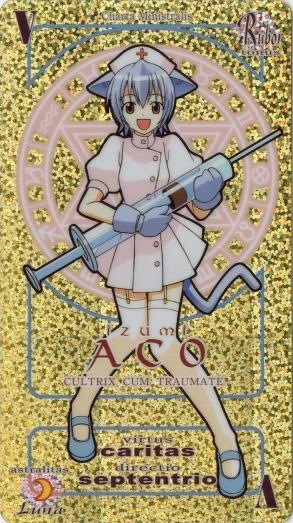 Ako is one of the more normal girls in the class and hangs out with the cheerleaders, who are also part of their band Dekopin Rocket. She has some major insecurities regarding the huge scar on her back, the origin of which is unknown. Furthermore, she's aware that she's nothing special, which is pretty detrimental to her self esteem. Upon seeing Negi's teenaged form, she develops a massive crush without knowing his true identity.

She was dragged along to the Magic World and had a continuation of her Mahorafest mini arc. She later gains a pactio of her own from Negi, which is a giant magic needle which she can use to numb pain and heal her allies, give them a Super Serum, or mess with their perception. 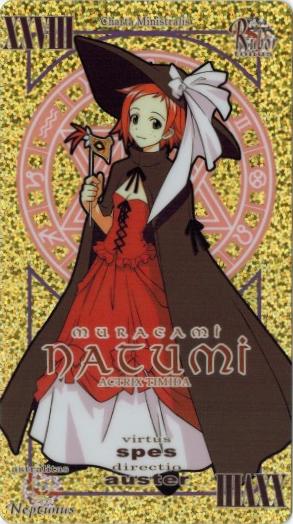 Natsumi is Chizuru's rather plain roommate and first takes a real role in the story when she stumbles upon Kotarō in his dog form, after which she takes him home and becomes his surrogate sister figure. Or at least, that's how it worked for Kotarō, while Natsumi actually ends up developing a crush on the boy.

She stows away to the Magical World and ends up with Akira and Ako before continuing her Kotarō focused subplot. She eventually makes a pactio with Kotarō, becoming his first ministra. Natsumi's artifact, Adjutor Solitarius (Lonely Stagehand) is a mask that, when covering her eye, makes her completely undetectable by magical or physical means, even if she's right in front of someone's face. She can extend this effect to whoever she holds hands with, making it an extremely useful ability. 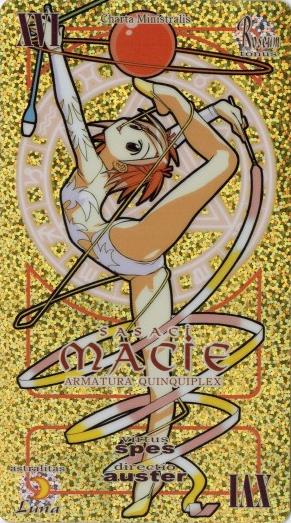 Makie is a sweet, bubbly girl and one of the first to develop a serious crush on Negi after seeing he was seriously pursuing his dreams and not just a cute little mascot. She's an impossibly talented gymnast in regards to her ability to utilize ribbons in her performances. She is not particularly bright, but she has a very supportive personality.

Makie was one of the stowaways to the Magic World. She later gains a pactio from Negi, and hers is unique in that it comes with five separate artifacts - an infinitely extending ribbon, a ball that can explode on contact, a pair of clubs that can grant her strength and change in size, and hula rings, though it is unknown what they do. It makes her versatile in the few combat situations she takes part in, but she is too inexperienced and lacks true strength or skill. 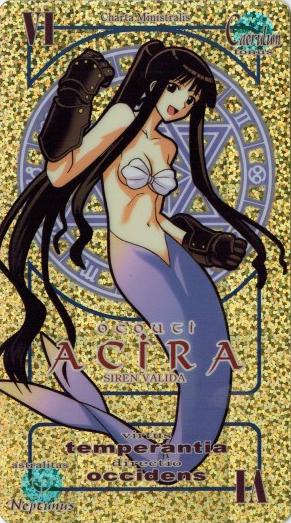 Akira is one of the gentlest members of the cast and particularly enjoys helping others. While most of the class is energetic and difficult to control, Akira is always calm and quiet. She's quite fond of Negi, the nature of which is left vague. She's an excellent swimmer.

She stows away to the Magic World, where she ends up getting a great deal more focus and speaks much more than normal. Late in the story, she gains a pactio from Negi that allows her to travel between bodies of water instantly, in a world where teleportation magic is rare and difficult. 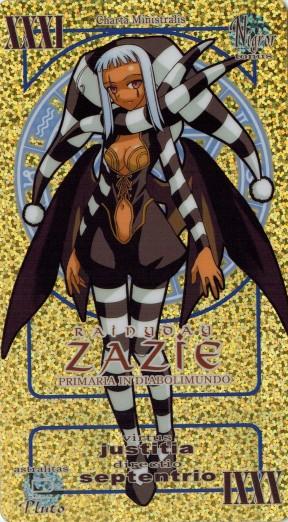 Zazie is the one member of Class 2/3-A that's gotten almost no Character Development at all. From what little information is given on her, she almost never speaks, appears to be some sort of circus performer, and has a number of weird black ghost blobs that accompany her everywhere. She can also apparently see Sayo. Her classmates are aware of her oddities and don't really know what to think of her. 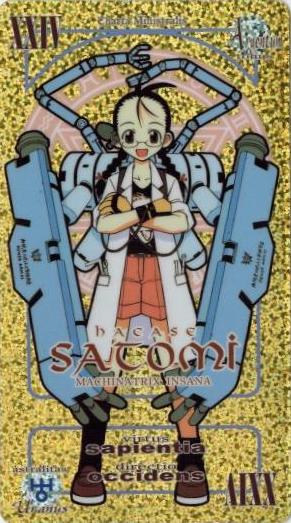 Class 2/3-A's other resident supergenius after Chao, Hakase is basically a Mad Scientist. Apparently aware of the existence of magic long before the series started, Hakase is primarily interested in its scientific applications and the development of Magitek, resulting in Chachamaru, who, with Evangeline's help, was developed as a joint product of magic and science.

Personality-wise, Hakase is somewhat obsessive about her work, often working so late she simply falls asleep in the lab. She also approaches things from a very logical perspective, meaning that she often fails to consider how her experiments might affect others personally. 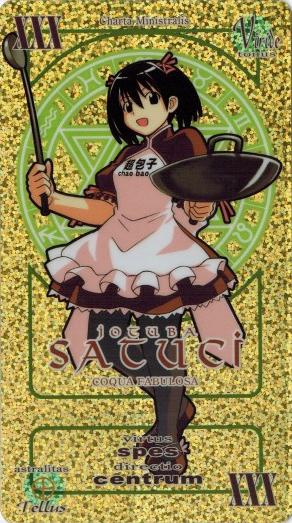 Satsuki is one of the few mature students in class 3-A and both knows what she wants and knows how she'll get it. She's an excellent cook and helps run Chao Bao Zi, which is something of a safe ground due to her popularity with both staff and students, who do not wish to make her angry by picking fights at her food stand. 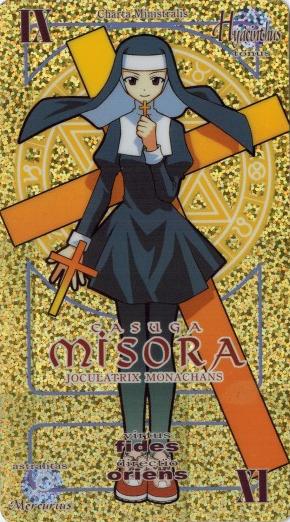 Misora is one of the mage students at Mahora, though apparently only because her parents want her to be. She works under Sister Shakti as an apprentice and goes around dressed as a nun when doing mage work, which she treats with about the respect you'd give a part time job. She's fond of pranks, gossiping and pretending she has nothing to do with what's going on.

She has a pactio with Cocone that grants her a pair of shoes that give her super speed, which she uses almost exclusively to run away from danger. 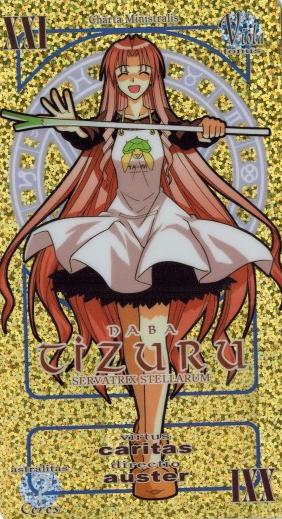 Chizuru is the motherly and caring roommate of Natsumi. She serves as something of a big sister figure for Kotarō, who is somewhat terrified of her. A natural conclusion for him to reach since she can be rather scary in general.

She remains out of the loop for most of the story, but near the end when Negi needs to enlist her help for his plan to save the Magic World. She makes a pactio with him that gives her a magic spring onion and allows her to control whoever she inserts it into.

Fuuka is portrayed by: Saya Kataoka

Fumika is portrayed by: Manaka Yamamoto 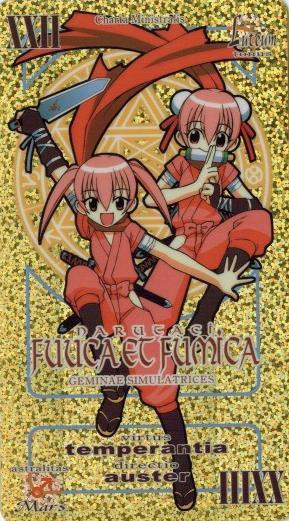 The cheerful childlike twins of Class 2/3-A, the Narutaki twins are known for their rambunctiousness, with an apparent hobby of catching people off-guard with their appearances fit for a nine-year-old. They're also good friends with Kaede, who has taught them some basic techniques of her craft. 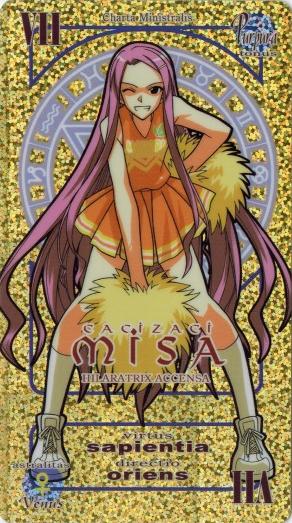 Misa is more or less a stereotypical cheerleader. She and her fellow cheerleaders Sakurako and Madoka love to hang out, shop, wear stylish clothes, and talk about boys. She's also the vocalist/guitarist of their band "Dekopin Rocket". Misa is the only student said to have an actual long-term boyfriend, though it's implied to be not that serious (and said boyfriend seems to have vanished altogether post-Mundus Magicus).

She's best remembered for proposing a "Reverse Hikaru Genji Project" for Negi, after seeing just how cool he was in the Mahora Budokai. Although she followed Negi to the gate to Mundus Magicus with Yūna and the others, she was not transported there. 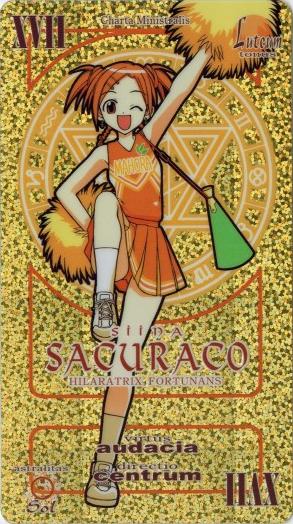 Sakurako's biggest claim to fame is her otherworldly luck. Otherwise, she's just another cheerleader, doing what cheerleaders usually do. She's also the guitarist and main vocalist of "Dekopin Rocket", a band consisting of her and her fellow cheerleaders Misa and Madoka. 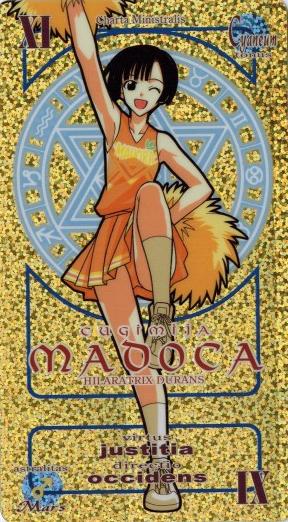 The third cheerleader, Madoka appears to be one of the only two Ordinary High School Students left in Class 2/3-A besides Misa. She is also the drummer for "Dekopin Rocket". She appears to have a crush on an aged-up Kotarō, though is also a bit boyish, and is apparently an Avril Lavigne fan.