Character Sheet for the spin off, Vigilante: My Hero Academia Illegals's main characters.

Beware of spoilers, both marked and unmarked! 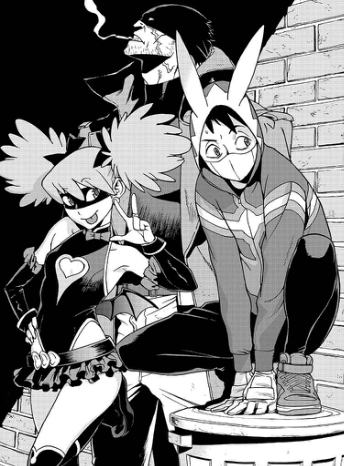 A trio of unregistered "heroes" taking to the streets to deal with the problems professional heroes either don't know, care, or (in rare cases) have the ability to do anything about. Banding together through "circumstances" (read: Knuckle Duster dragging the other two along kicking and screaming), they deal with crime in their special way while trying not to get arrested by their stronger, more organized counterparts.
Koichi Haimawari — Nice Guy/The Crawler 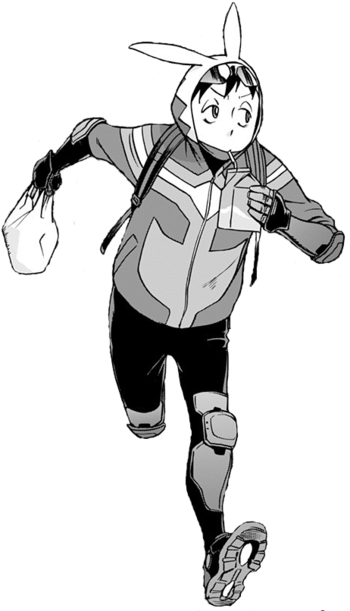 "Nothing like doing good to make you feel good!!"

The hero of the story, a 19-year-old who wanted to be a hero, but missed his chance when he was young. After hours, he dons a costume and does "hero work" (really just self-imposed public services like giving out directions, delivering lost items, helping the elderly cross the street, and cleaning up trash), until an encounter with Knuckle Duster changes his life.

His Quirk is "Slide and Glide", which allows him to slide around at the speed of a bike when at least three of his limbs are touching the ground. There's a lot more to his Quirk than he thinks, and with added training and experience, Koichi starts to take the brakes off it to use for vigilantism.

A girl who fashions herself as a Pop Idol and does "Guerilla Concerts" in public. Her Quirk is Leap, which allows her the ability to jump high into the air as long as she can touch a foothold. 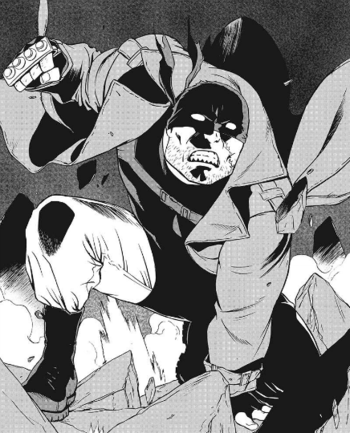 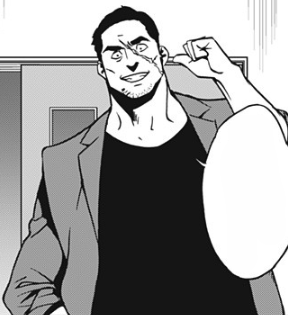 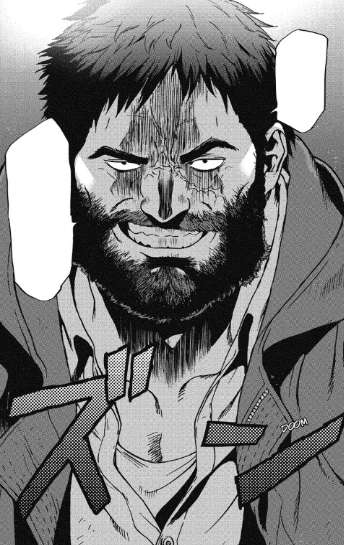 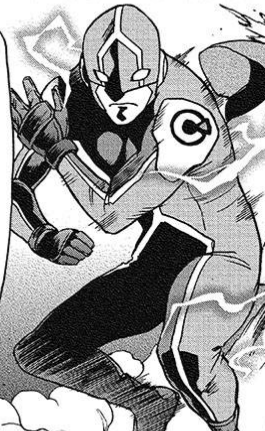 "Strong Quirks? The stuff to go pro? That crap's got nothing to do with true justice. In that moment when it's clear what's gotta be done... Do you take action, or don'tcha? All you need to be a hero is the right answer to that question!!"

A Quirkless vigilante who goes on the prowl for criminals at night. He seemingly retired from vigilantism after defeating Kuin and saving his daughter, but in actuality, he traveled to Hong Kong, China to learn more about Trigger.

Before the series began, he served as a hero called O'clock. He possessed an acceleration Quirk called "Overclock" that allowed him to move incredibly quickly in short bursts. He fell out of public view a few years before the series began and was even thought to have died, but he really just went into hiding after something resulted in him losing said Quirk, forcing him to become a Quirkless vigilante. 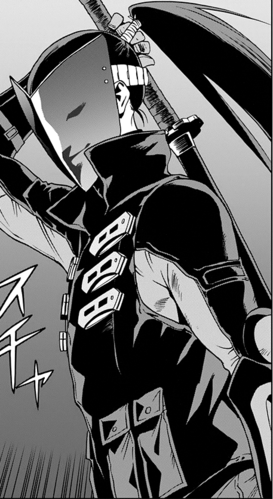 "He... "Stendhal" has become more than human. The red of life, and the black of death. He is the one who cleaves that divide with a single slash. Judgement Personified."

Another vigilante that Crawler and Pop☆Step meet while chasing down a villain. Stendhal functions as a Serial Killer vigilante, targeting villains and killing them so they can't cause more trouble. For tropes regarding his current identity, see his entry here. 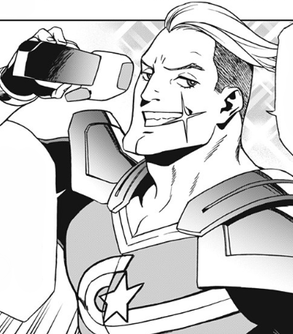 A high-ranking American pro hero, whose Playboy attitude landed him into so many scandals and lawsuits that he had to relocate to Japan just to find work.

His Quirk is "Flight" and it allows him to levitate and fly at high speeds. 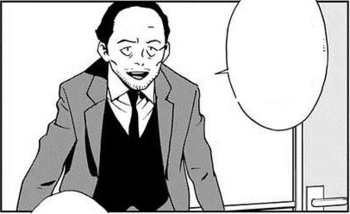 A detective on the police force, and the lead investigator of the Trigger outbreaks. 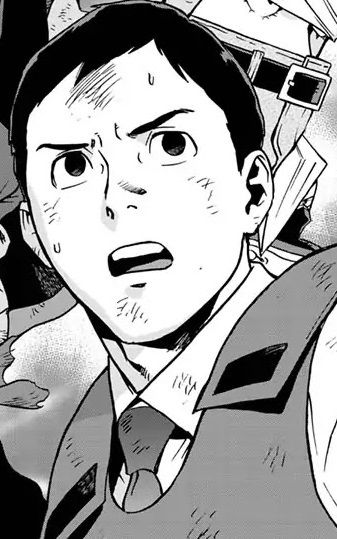 A detective from the main series. In Vigilante, he works as an investigator for the Trigger Incidents, which leads to him and All Might's first meeting. 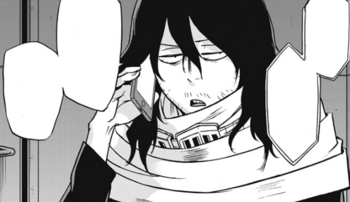 A Pro Hero from the main series. Since Vigilante takes place a few years before the main series begins, he has yet to take his job teaching at U.A. and is working as a normal hero. He assists in investigating the Trigger Incidents and acts as something of a mentor to Koichi on occasion. 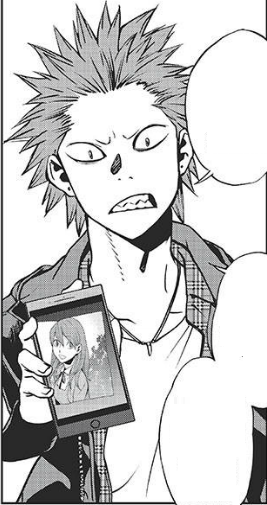 "That's always the way it is. These bastards are always... always... Smilin' all the while, treatn' me like I'm some sort of monster!"

A violent thug who crosses paths with the vigilantes on occasion. Initially just an antagonist, he eventually becomes a close ally to the vigilantes, namely Knuckle Duster. His Quirk, "Spikes", enables him to produce spikes from his body. 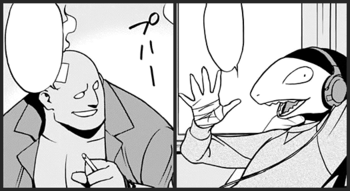 Rapt on the right and Moyuru on the left
Soga: Rapt... you think you'd ever wanna fly again?
Rapt: Eh? No way. I flew. I fell. Bam! Hospital.What kinda dumbass doesn't learn a lesson?
Moyuru: No doubt! Hey, any hot nurses in this joint?
Rapt: Gya ha ha! Get yourself hurt and find out.

The younger sister of police detective Naomasa Tsukauchi, and an upperclassman at Koichi's college. She's studying the hero system and the history of vigilantism for her college thesis. Her Quirk, "Polygraph", enables her to tell whether someone is lying or not by making physical contact with them. 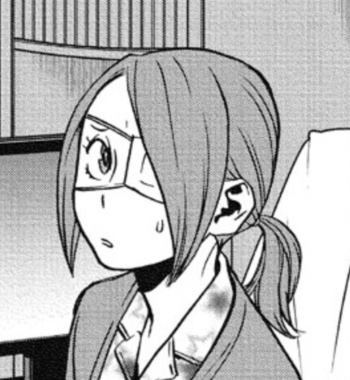 "Not like I was ever in love with the guitar. Not really. I just played cuz I knew it pissed off my dad."

Knuckle Duster's daughter, a.k.a Kuin Hachisuka... Kinda. After a fight with her father over her performing at a concert, Tamao was lured astray by the Villain Factory, and was selected to be the new host of the Queen Bee, creating "Kuin Hachisuka" as seen in the main story. As of Kuin's defeat, and the Queen Bee's extraction, she's been staying in a hospital recovering. 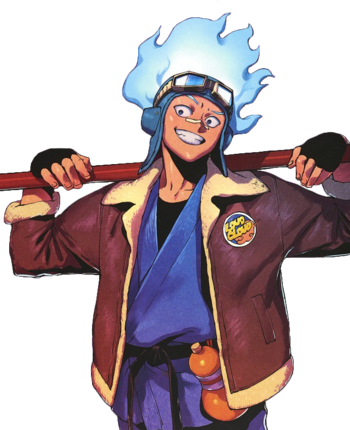 "Whoa there, Hizashi! Got yer hands all over Shota, do you? Outrageous! Scandalous! Shameful! Lemme in on it!"

A second-year classmate Eraserhead & Present Mic had when they attended U.A. High School. His Quirk, "Cloud", allows him to create various clouds. 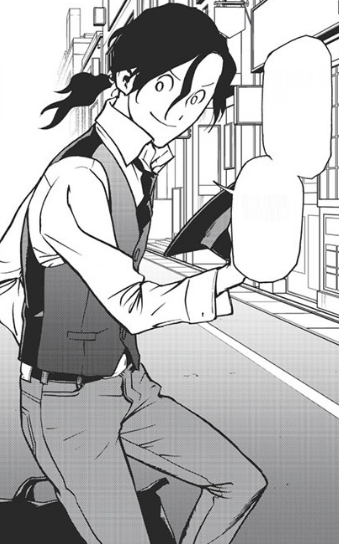 The Marukane Event Department's manager after Makoto moved to America. He also has a hero license and an interest in Pop☆Step.