This page contains information about the characters from the Mr. Driller games. Beware that spoilers won't be hidden!

The characters' names will be formatted in this style: English Name/Japanese Name

The middle son of the famous Taizo Hori (a.k.a Dig Dug) and Masuyo Toby (a.k.a "Kissy" from Alien Sector) and the main character of Mr Driller. Barely just 15 years old, he has been already entitled with the highest rank of driller in the world. He's actually a really sweet child but he tends to be a little careless.

"How rude! Im a girl! HMMPH!"
Voiced by: Mitsuko Horie

Anna is a female driller about Susumu's age that hails from an Elite Driller school in Germany. She's also the second highest driller in the world after Susumu. Which makes her The Rival who wants to steal his title. Despite all of this she seems to have a crush on Susumu.

She tends to be mistaken for a boy, a lot, from both the viewers and the characters themselves.

"I'll show you how its done!"
Voiced by: Toshio Furukawa

Ataru is Susumu's big brother. An 18 year old rogue driller with no license who ran away from home after he got in a fight with his father, he now holds a grudge against him, although Taizo seems to be totally clueless about it.

Ataru is the kind of guy who always tries to have a "Cool" air around him.

"Time to watch the legend in action!"
Voiced by: Toshio Furukawa

Taizo Hori, originally the hero from the Dig Dug games, is now the father of 3 children, Masuyo Toby's Ex-husband and the president of the Driller Council. He's already at his forties but by no means is he willing to settle down. For some unknown reason he's despised by his elder son.

For some reason he feels an almost unhealthy love for Egypt, especially for the camels.

Puchi is Susumu's best friend and lives with him at his house in Endogawa. He was found by Susumu as a puppy and was nursed back to health. He's a genius dog that can both understand and speak human language. He always brags about how he inherited the ability to find metals underground from his ancestors.

Holinger-Z is a robot constructed by Dr. Z for the purpose of doing drilling work that otherwise would be too dangerous for a human to do, although he's very clumsy and tends to mess things up. He currently lives with Anna, doing her housework.

Usagi is a rabbit-looking alien that originally came from the moon to invade Earth, but his ship crashed down and he was severely injured. He was next found by Ataru and was nursed back to health. He then decided to follow Ataru to observe this planet a little more.

Keel is the leader of the Ankoku/Darkness drillers. His father owned a ninja-themed amusement park that went bankrupt. He's apparently a ninja, or at least he likes to pose as one. He has a tendency to be mean with everyone he knows.

Kowars is the second member of the Ankoku Drillers, he's an android developed by the Driller Laboratory. He's a gentle giant who somehow ended working for the bad guys. He seems to be a big fan of Taizo.

Eguri is the third, last and only female member of the Ankoku drillers. Her drill is oddly attached to the end of a whip. She loathes to be called by her real name and introduces herself as Tiara. She's emotionally unstable and is madly in love with Ataru.

The boss of the Ankoku Drillers, Dr. Manhole is an evil scientist who used to be a good guy, but thanks to a series of unfortunate events, he turned evil and now desires to destroy the human race.

The main scientist of the Driller Laboratories, also the one who designed Susumu and friends' drills and Holinger Z. He's a very kind and supportive man who's always willing to help the drillers in every way he can. 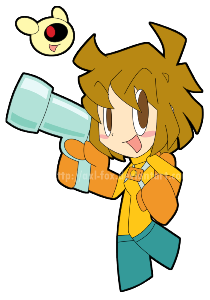 Masuyo Toby, originally the heroine of the Baraduke battles, she married and divorced Taizo and now is the mother of 3 children. She's now working as a novelist and raising Susumu's young brother Taiyo. She got the nickname "Kissy" for her tendency to kiss people when she gets drunk.