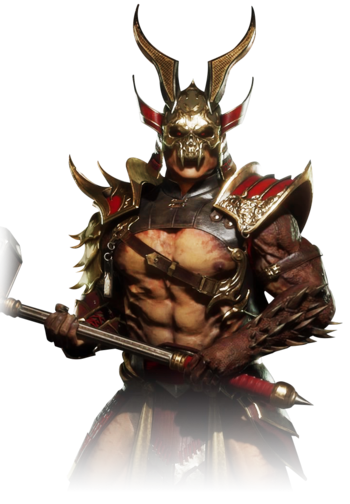 "I am Shao Kahn! Konqueror of Worlds! You will taste no victory!"
Debut game: Mortal Kombat II (Brian Glynn/Steve Ritchie)
Other appearances: Mortal Kombat 3 (Brian Glynn/Steve Ritchie), Mortal Kombat: Deception (Gamecube version only), Mortal Kombat: Armageddon (Nigel Casey), Mortal Kombat: Shaolin Monks (Steve Ritchie), Mortal Kombat vs. DC Universe (Patrick Seitz), Mortal Kombat 9 (Bob Carter), Mortal Kombat 11 (Ike Amadi, English; Stephan Scalabrino, Face Model; Eduardo Fonseca, Latin American Spanish)
Non-game appearances: Mortal Kombat: The Movie (Frank Welker, cameo), Mortal Kombat: Annihilation (Brian Thompson), Mortal Kombat: Defenders of the Realm (John Vernon, and later Michael des Barres), Mortal Kombat: Conquest (Jeffrey Meek), Mortal Kombat: Legacy (Aleks Paunovic), Mortal Kombat Legends: Scorpion's Revenge (Fred Tatasciore), Mortal Kombat Legends: Battle of the Realms (Fred Tatasciore)
Advertisement:
The supreme ruler of Outworld and one of the biggest threats facing Earthrealm, Shao Kahn is one of the most powerful forces in all the realms. The Emperor has long been obsessed with the conquest of Earth.
Shao Kahn was once the advisor of the legendary Dragon King, Onaga. Before the Dragon King could obtain immortality, Kahn poisoned him and took his former master's throne. Eventualy going on to conquer countless lesser realms through brute force and Mortal Kombat, he consumed untold souls in his neverending quest for power.
When he took Edenia - a milestone in his campaign - he murdered King Jerrod in battle and took his wife Sindel as his bride. He then raised Jerrod's daughter Kitana as his own, and trained her to be his personal bodyguard. Sindel eventually decided to kill herself rather than live as his slave - but even death would not free her of Shao Kahn. He trapped her soul in Outworld, thus denying her the afterlife.
Advertisement:
Kahn's next target was Earthrealm. He sent Shang Tsung - and then Goro - to gain enough victories in Mortal Kombat to allow him to freely invade the realm. Despite a 500 years-long winning streak, Goro was denied the vital tenth victory by Liu Kang - a descendant of the very same man who had put an end to Shang Tsung's dominance of the sacred tournament centuries ago. Enraged, Kahn brought Tsung before him to punish him personally. However, the sorcerer begged him for another chance, one that the Emperor believed might hold the key to undoing five centuries of wasted plans. The plan was to draw Liu Kang and his allies into an Outworld tournament where they would surely die. However, the new Mortal Kombat Champion proved to be too great even for the Emperor of Outworld - by defeating him personally. Unwilling to accept this, Kahn ordered his forces to kill off the Earth's fighters, but they managed to escape.
Shao Kahn had one last plan up his sleeve, however. Shang Tsung was ordered to complete a plan 10,000 years in the making by reviving Kahn's long-dead wife, Sindel, not on Outworld - but on Earthrealm. This allowed Kahn to step through the gateways between the realms to claim her and undermine the safeguards of Mortal Kombat, thus launching a full-scale invasion of Earth. Consuming countless millions of souls upon entering the realm, he then sent extermination squads to destroy those whose souls he could not steal. The chosen few eventually defeated Outworld's forces, with the Emperor himself falling once again to the might of Liu Kang. Shao Kahn was greatly weakened by this defeat, and Earthrealm was restored. Many of his so-called loyal soldiers had abandoned him, and his adopted daughter Kitana had turned Sindel to her side, thus restoring Edenia as an independent realm. To make matters worse for Kahn, the Shokan race had joined their ranks. When Shang Tsung and Quan Chi came before him to pledge allegiance, this meeting soon became an assassination attempt - and seemingly his reign had finally come to a violent end. However, Deception revealed that the Outworld Emperor had planted a clone in his stead and restored the mortally wounded Goro with his remaining power, thus regaining Shokans as allies.
During the events of Armageddon, Shao Kahn would go on to form an uneasy alliance with Quan Chi, Shang Tsung, and resurrected Onaga in the hopes of preventing the Forces of Light from defeating Blaze and then seizing his own opportunity to strike when it came. He eventually succeeds and gets Blaze's godlike power, pretty much killing off Raiden and seizing all of the worlds for himself in the process.
Avoiding Shao Kahn's causing of Armageddon is the basis of the entire storyline of Mortal Kombat 9, in which the original canon's Shao Kahn is about to kill off Raiden and overthrow all the realms. Kahn's role in 9 is mostly reflective of the role he played in the original canon, being the main threat to Earthrealm in the eyes of Raiden. Things proceed mostly the same for Kahn with some minor exceptions, (such as the murder of Kung Lao, who had won the Outworld tournament instead of Liu Kang) until the very end, where Raiden's message from the future finally becomes clear: since Kahn's invasion is considered an unlawful breach of the rules of Mortal Kombat, he must be allowed to overthrow Earthrealm so the Elder Gods can punish him. In doing so, Shao Kahn is finally defeated once and for all.
Returns in Mortal Kombat 11, as pre-order DLC and an antagonist in the story mode. This also marks the first time he is playable in the initial roster of a non-Updated Re-release or Dream Match Game entry in the series and not billed as a boss character. He is brought back from the past by Kronika and aids her in guarding the Hourglass, distracting the heroes by trying to reclaim his throne from Kotal Kahn. He plays a larger role in the Downloadable Content Aftermath, where his interactions with Sindel are given focus as well.
open/close all folders
A-F
G-L
M-R
S-Z
Feedback