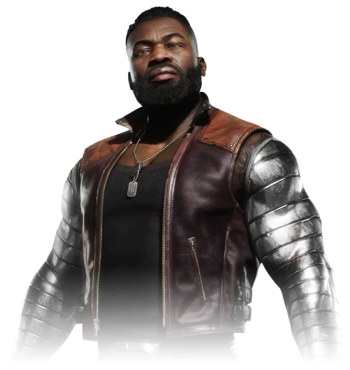 "Bring It!"
Debut game: Mortal Kombat II (John Parrish)
Other appearances: Mortal Kombat 3 (John Parrish), Mortal Kombat 4 (John Parrish), Mortal Kombat: Special Forces (Craig J. Harris), Mortal Kombat: Deadly Alliance (Craig J. Harris), Mortal Kombat: Unchained (Craig J. Harris), Mortal Kombat: Armageddon (Craig J. Harris), Mortal Kombat: Shaolin Monks, Mortal Kombat vs. DC Universe (Dan Washington), Mortal Kombat 9 (Marz Timms), Mortal Kombat X (Greg Eagles and Carl Weathers, English; Gerardo Vásquez, Latin American Spanish), Mortal Kombat 11 (William Stephens, English; Israel Idonije, Face Model; Héctor Estrada, Latin American Spanish)
Non-game appearances: Mortal Kombat (Gregory McKinney), Mortal Kombat: Annihilation (Lynn "Red" Williams), Mortal Kombat: Defenders of the Realm (Dorian Harewood), Mortal Kombat: Rebirth / Mortal Kombat: Legacy (Michael Jai White), Mortal Kombat Legends: Scorpion’s Revenge (Ike Amadi), Mortal Kombat (2021) (Mehcad Brooks)
Major Jackson "Jax" Briggs was the first African-American character in the Mortal Kombat series and an archetypal American hero. Leader of the Outer World Investigation Agency (OIA), he is an extremely capable fighter when it comes to protecting Earthrealm. His most prominent traits are his cybernetically-enhanced arms.
Prior the start of the series, Jax was a member of the Special Forces and was dedicated to the dismantling of the Black Dragon Clan. He almost succeeded: after disposing of the rest of their members, Jax faced the clan's leader Kano and beat him in combat. Kano was captured, but the criminal escaped at a later date. Following the events of Mortal Kombat, Briggs went in search of both the escaped Kano and Lt. Sonya Blade. He confronted Johnny Cage about the tournament, but at first didn't believe Cage's claims. However, after receiving a video signal from Sonya herself, he visited Johnny at a commercial shoot with the intent to apologize to Cage for not believing him. Jax found the actor fighting a horde of Tarkatans led by Kintaro; he helped fight off the intruders until the other Earthrealm warriors showed up to help. Afterwards Jax traveled into Outworld to compete in the next tournament along with the Earthrealm warriors in hopes of finding Sonya and Kano. Here, Jax soon came to learn of the Emperor Shao Kahn's plans for Earthrealm. He was successful in freeing Sonya, but not only did Kano escape once more, the Earth government did not believe the Major's warnings. Jax began to prepare for the imminent conflict, and donned himself bionic implants. When Kahn come to Earth, Jackson Briggs was ready for it.
After Shao Kahn's attempt at claiming Earthrealm failed, Jax became the commanding officer of the Outer World Investigation Agency; the OIA was not only assigned to explore and map other realms, but were also committed to the destruction of portals that could lead to Earth. After briefly assisting Raiden in the defeat of Shinnok in Edenia, Jax and Sonya found the Lin Kuei cyborg Cyrax, malfunctioning and trapped in a desert. Returning with him to their home base, they restored his humanity and gained a new ally. Years later, trouble would occur again, as not only were agents Kenshi and Cyrax lost in Outworld, but the OIA underground facility was nuked into oblivion by the traitor Hsu Hao. Jax tracked him in Outworld and killed the Red Dragon member. Afterward, he was among the group of warriors who made a final stand against the Deadly Alliance of Shang Tsung and Quan Chi, but was unfortunately killed in the ensuing fight along with the rest of his allies. He, like his friends, was eventually found by Onaga and revived as a mindless drone.
Jax is pretty much the same hardass as always in Mortal Kombat 9, but with a few changes to his story. At the outset of the story, he is held captive on Shang Tsung's island and Sonya becomes involved in the tournament with the goal of extracting him. He enters the Outworld tournament on a rescue mission when Sonya is captured during an Outworld invasion of the Shaolin temple. Unlike the original timeline, Jax did not voluntarily change his arms to mechanical arms, but had his arms destroyed by Ermac during the Outworld tournament — the mechanical arms he has are prosthetic. He aids the Earthrealm warriors until Sindel and the cybernetic Lin Kuei attack their base of operations, where he is slain. His soul is resurrected by Quan Chi in the Netherrealm but Mortal Kombat X shows how he escaped enslavement. He has an adult daughter by the time of Mortal Kombat X named "Jacqueline" (who goes by "Jacqui").
Unfortunately, his life didn't get better, even after being discharged honorably in Mortal Kombat 11. His time as a revenant, combined with the stress of losing his original arms, losing his wife to sickness, having PTSD, and his fear of losing Jacqui, resulted with him making a deal with Kronika in hopes of a better world where Jacqui won't have to fight anymore. Another Jax is brought back from the past due to Kronika's machinations and is far from pleased at what his future self has done.
Baraka 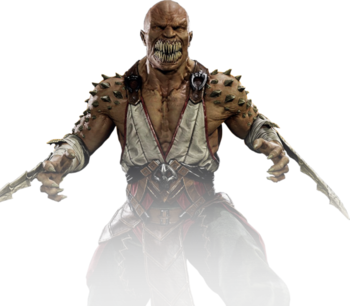 "My blades will find your heart."
Debut game: Mortal Kombat II (Richard Divizio)
Other appearances: Mortal Kombat Trilogy (Richard Divizio), Mortal Kombat Gold (Richard Divizio), Mortal Kombat: Deception, Mortal Kombat: Armageddon (Ryan Rosenberg), Mortal Kombat: Shaolin Monks, Mortal Kombat vs. DC Universe (Dan Washington), Mortal Kombat 9 (Bob Carter), Mortal Kombat X (cameo) (Greg Eagles, English; Gerardo Vásquez, Latin American Spanish), Mortal Kombat 11 (Steve Blum, English; Carlos del Campo, Latin American Spanish)
Non-game appearances: Mortal Kombat: Annihilation (Dennis Keiffer), Mortal Kombat: Rebirth (Lateef Crowder)
A mean, unforgiving, and unpredictable warrior, Baraka belongs to a race of nomadic beings called Tarkata, whose realm was conquered ages ago by Shao Kahn, causing him to swear loyalty as a result. Baraka, like most other members of his race, possesses long blades extending from his forearms that he uses to nasty effect in battle.
In the events leading up to Mortal Kombat II, Baraka led the attack on the Shaolin Temple in Earthrealm, which spurred Liu Kang to seek vengeance in Outworld as predicted by his master, Shao Kahn. During the ensuing tournament, Baraka partnered with Mileena, herself part-Tarkata, to overthrow the Emperor and rule together, but Mileena was murdered and Baraka fleed to the lowlands of Outworld. In the time prior to the events of Mortal Kombat Gold, Baraka encountered the necromancer Quan Chi while wandering through Edenia. Quan Chi offered Baraka a chance to rule the realm at his side if he agreed to join the army of Shinnok. Eager for battle, he readily accepted. Once again Baraka planned to betray his new masters, but after Shinnok was defeated by Liu Kang, his opportunity was lost once again.
After the Deadly Alliance was defeated by the risen Onaga, Baraka and his Tarkata horde joined the Dragon King. After freeing Mileena from her prison, Baraka recruited her to Onaga's ranks. Posing as her sister Kitana, she misdirect the Edenian forces into combat against Baraka's Tarkatan raiding parties, thus giving time to Onaga for him to complete his schemes. However, Mileena gave command of Kitana's army to Bo' Rai Cho, and under his command, a lot of Tarkatans warriors were killed, angering Baraka. In the end, Onaga was defeated, Baraka finding himself once more allied with the losing faction.
Baraka is basically unchanged during the events of Mortal Kombat 9. He makes a couple of cameos in Mortal Kombat X, where he is killed by D'Vorah once Kotal Kahn makes his move to overthrow Mileena. Kronika would later bring another version of himself in Mortal Kombat 11 as one of her accomplices.
Kung Lao 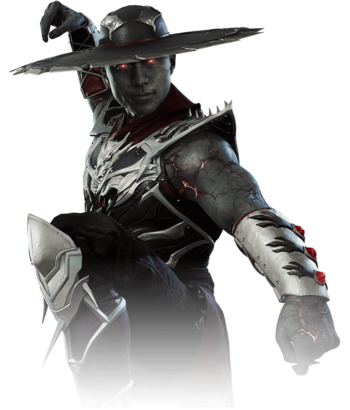 "For the Shaolin!"
Debut game: Mortal Kombat II (Tony Marquez)
Other appearances: Mortal Kombat 3 (Tony Marquez), Mortal Kombat Gold (Joshua Y. Tsui), Mortal Kombat: Deadly Alliance, Mortal Kombat: Armageddon, Mortal Kombat: Shaolin Monks, Mortal Kombat 9 (Jin Hyong), Mortal Kombat X (Will Yun Lee, English; Eduardo Garza, Latin American Spanish), Mortal Kombat 11 (Sunil Malhotra, English; Tian Shuai, Face Model; Alan Fernando Velázquez, Latin American Spanish)
Non-game appearances: Mortal Kombat: Legacy (Mark Dacascos), Mortal Kombat (2021) (Max Huang)
A member of the same Shaolin order as Liu Kang, Kung Lao is the descendant of the Great Kung Lao who defeated Shang Tsung many generations before. His trademark feature is his razor-brimmed hat, which he can throw as a weapon.
Kung Lao is a quiet man who does not advocate violence or conflict. As such, he decided to omit himself from the Mortal Kombat tournament that Liu Kang attended and subsequently won (though this is retconned in 9). Later on, the Shaolin temple was attacked by Outworld monsters and Kung Lao decided that now was the time to act and stepped through the portal to Outworld to fight off the evil alongside Liu Kang. Upon returning from their success in Outworld, Kung Lao attempted to reunite the White Lotus Society, but was derailed when Shao Kahn invaded Earthrealm. Chosen as one of Raiden's protected warriors, he once again left his life of peace to defend Earthrealm from Outworld.
After driving back Shao Kahn's invasion, Kung Lao decided to retire to a solitary existence and led his companions to believe he perished from injury. When word of Shinnok's ambition reaches him along with rumors that Goro, the man who had killed his namesake ancestor, is still living he returns to battle. He encounters Goro but rather than come to blows, the two warriors come to peace and end generations of bitterness. Kung Lao was the first to discover Liu Kang's body following Shang Tsung and Quan Chi's ambush and swears vengeance. He trains himself under the same master as Liu Kang with the hopes that his newfound skill would bring justice. Unfortunately, this was not the case and he would find himself unable to stand against Tsung and was vanquished. He was revived to serve Onaga's goals during Deception but frees his spirit in time to climb the pyramid in Armageddon.
Kung Lao's story changes quite dramatically in Mortal Kombat 9. For starters, he is present at the original tournament, unlike the first canon (though it does take after the events of Shaolin Monks where he dresses up as a guard), having snuck into the tournament out of jealousy towards Liu Kang. Raiden exposes him and has him fight Scorpion so he can be eliminated and not affect the course of events. Later on he participates in the Outworld tournament and this time Raiden allows him to face Outworld's champion, Kintaro, instead of Liu Kang. Unfortunately this has the negative effect of Shao Kahn simply snapping his neck from behind and killing him instantly after he wins, leaving Liu Kang to avenge his death and events mostly play out as they did in Mortal Kombat II as a result. His soul is resurrected as a Netherrealm slave by Quan Chi, and he does not escape from his captor come the events of Mortal Kombat X.
Thanks to Kronika meddling with time in Mortal Kombat 11, another version of himself and Liu Kang ended up being involved with the plot and they're clearly disgusted at what their older revenant selves have become as servants of Kronika and the Netherrealm.