To see Tropes associated with Subaru Miyamoto in the previous series, head to the Subaru character sheet

Subaru headed to Germany, after the events in America that ended the previous series. She signed a contract with a German ballet company and has been dancing there, but without getting any roles assigned to her. When her dance troupe was to perform in Japan, she cancelled her participation last minute by saying she was sick with pneumonia.

When Subaru sees Nico dance, she says that he is a much more carefree dancer than any dancer who can see and expresses a wish to be like him. She begins to practice The Bluebird pas de deux with him and their coordination eventually ends up working perfectly. 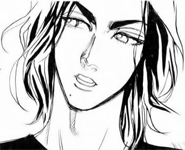 A blind, but very talented ballet dancer. Nico ended up in a plane crash, with the result of having lost his dance partner and beloved Victoria at the same time, also robbing him of his eyesight when he was 19 years old. Ever since, he has been a solo dancer.

When Subaru notices him, she forcefully asks him to dance a pas de deux with her, stating that he will see a 'whole new world' with her. As one would think, they have difficulty performing well together, as his lack of eyesight made it tough to coordinate well. But as things begin to work out, her energy while dancing allows Nico to 'see' her.

A chinese acrobat-turned-ballerina. She comes from a poor family and was sold to a school that trained acrobats, under the guise of it being a free, regular school she can attend and do acrobatics, which she enjoys a lot. The school taught some basic ballet at times.

When Minmin watched her first ballet performance, done by Priscilla Roberts, she became fascinated with ballet and decided to focus more time on that than her acrobatics.

Eventually, Minmin decided to let a coin toss dictate whether she'd give up or continue down the path of ballet.

For trops associated with Subaru's mother and father in the previous series, head over to the Subaru character sheet

Shortly after Subaru went to America, she and her husband ended up divorcing. She has taken on her maidename of 'Kato' again.

She's following news about Subaru and her career and often pre-orders tickets.