open/close all folders
The Searchers

The heroes of the story, a group seeking to find and unlock the Phoenix. 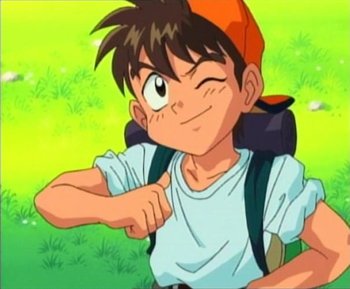 Our excitable Hero, who gets transported to the series world by a prototype game, something he takes extremely well, all things considered. Brash and impulsive, but his boundless energy and enthusiasm can prove catching. 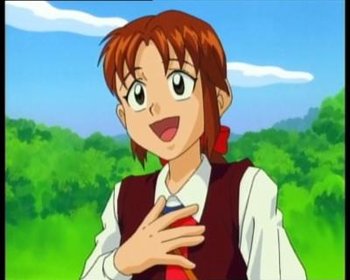 A young woman who has been searching for the legendary Phoenix with the help of her best friend Suezo and the Magic Stone, a mysterious pendant which acts as a sort of magical compass, pointing out the way they should travel. Acts as The Heart of the Searchers — all of them have joined her quest, and she in turn keeps their very different personalities from clashing to the point of tearing the team apart. 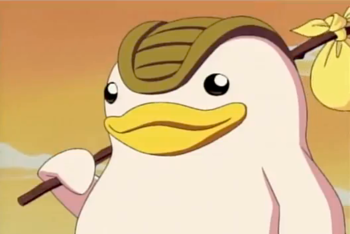 A cute pink monster unlocked from Genki's game disc. While the others are initially concerned that bringing along a newly born monster on such a dangerous quest isn't the best idea, Mocchi grows into one of the team's best battlers, as well as Genki's best friend. 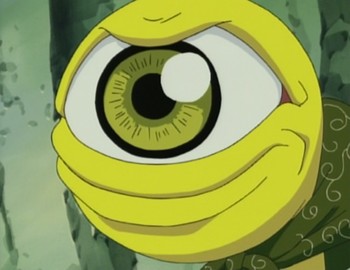 Holly's partner/best friend. She tends to spoil him quite a bit and didn't really focus on training him to fight; as a result, he isn't as strong as his species can be, though that doesn't stop him from doing his best to protect her. 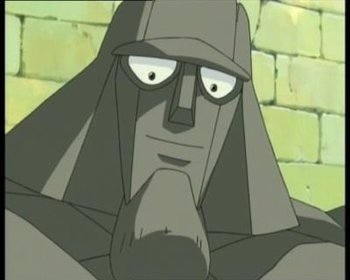 A Gentle Giant who lives in a clearing in the forest and is known as the 'enigma'. While he is the largest and most physically imposing of the Searchers, he is also the most compassionate and prefers to avoid fighting. During most battles, he acts as the team's Stone Wall. Don't piss him off.

Tiger of the Wind 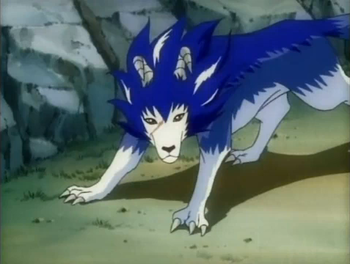 A wolf bandit who steals from travelers in order to support his pack of wild and stray tiger hybrids. When that doesn't end well, he joins the Searchers in order to get revenge on Moo. Very proud and stubborn. 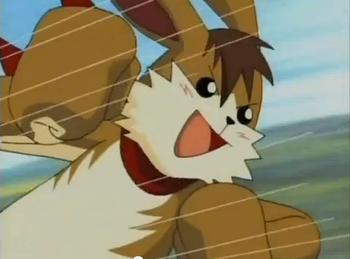 The Trickster who pulls a fast one on Tiger, then tries to con the rest of the group. When that doesn't work out quite the way he expected, he apologizes and cheerfully joins the team, acting as The Smart Guy — though his arrogance and overconfidence works against him sometimes.

A legendary bird monster who fought Moo long ago, the Phoenix can turn bad monsters to good and revive lost Mystery Discs. While now the stuff of legends, Holly believes it exists, and finding the Phoenix is the object of the Searchers' quest.

Moo and his Followers

Tropes shared by the Baddies in general 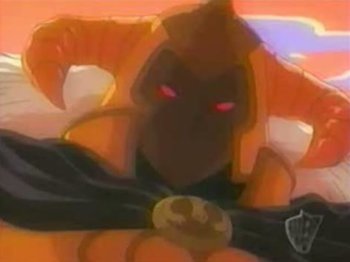 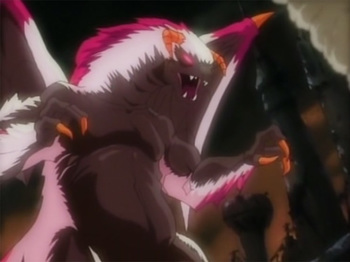 An ancient evil whose origins are Shrouded in Myth, Moo has risen and begun terrorizing the land once more. He has the power to corrupt monsters, signified by wearing his crest. 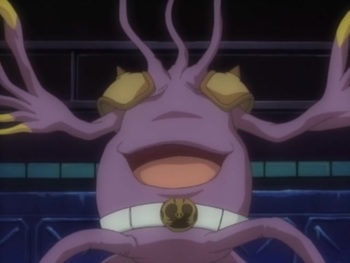 Moo's right-hand man and most trusted advisor. He is also the leader of the Weeds and personal emissary to the Big Bad Four. 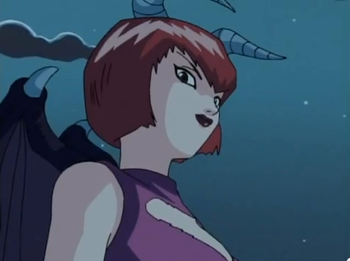 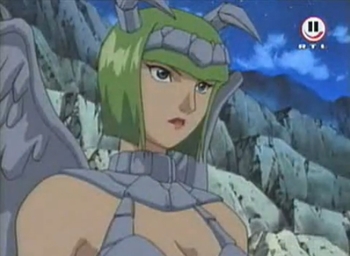 to her as Granity
Voiced by Kotono Mitsuishi (Japanese); Saffron Henderson and Janyse Jaud (English)

One of Moo's Big Bad Four, his strongest generals. She has a serious grudge against humans, having seen them abuse and mistreat monsters for so long. 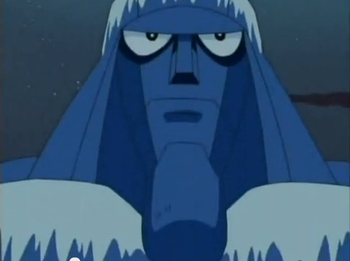 A Golem/Tiger hybrid and Pixie's personal bodyguard, a towering golem whose tiger sub-breed lends his stone skin an icy appearance. Stoic and stalwart, and completely loyal to his Master Pixie. 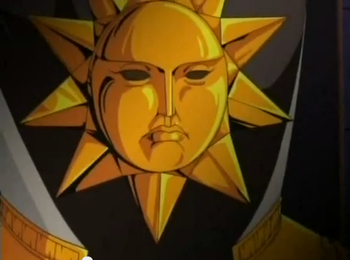 The second of Moo's Big Bad Four, a mysteriously floating mask and cape with seemingly nothing supporting them.

One of Gali's followers and a Master of Illusion who enjoys entrapping his victims with his magic before dealing the final blow. 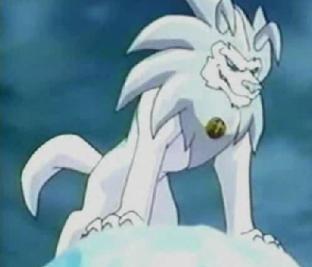 Tiger of the Wind's little brother, who was abducted by Moo and transformed into one of his Big Bad Four. A vicious hunter who exults in his own heartlessness.

A beautiful water nymph who oversees a lake. Hides her crest of Moo underneath a mantle and approaches Golem, befriending him. 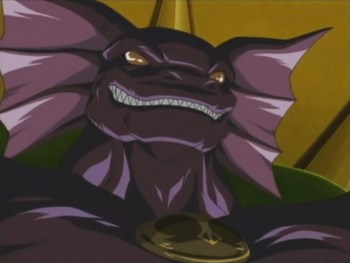 The fourth of Moo's Big Bad Four, and the monster responsible for razing Holly and Suezo's Doomed Hometown. 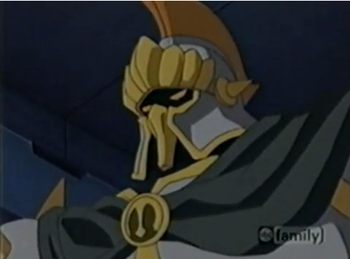 A set of Animated Armor who maintains an army of his own monsters, frozen and kept on hand for whatever tasks he cares to set them upon. While he works for Moo, he secretly plans to overthrow him. 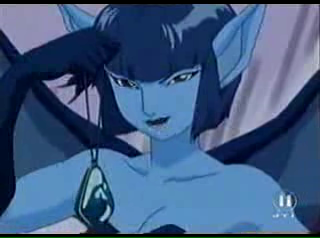 Durahan's right hand woman, specifically a Pixie/Joker mix. More conniving and evil than Pixie, and she seems to have her own agenda...

A vain Mew/Pixie type who appears in Season 3 under Durahan. She often buys exercise gadgets to look her best and one-up Poison.

A perky, special-breed Pixie serving under Durahan in Season 3. She has a rivalry with Mum Mew for Durahan's affections.

A Golem/Henger hybrid serving under Durahan in Season 3. Frequently the subject of mistreatment. 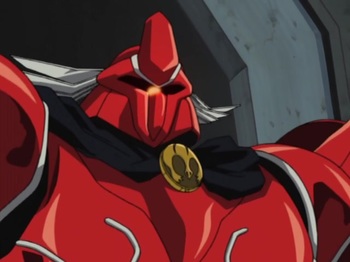 A special-breed Durahan brought to life by Moo's evil soul after fusing with Durahan and his minions. He is also Moo's final form.

The unnamed father of Holly. Several years before the series began, he was exiled from his village leaving Holly behind.

A trainer who cruelly abuses his giant Worm by repeatedly whipping and terrifying it. This bites him hard during "Eternal Worm".

A mysterious monster that appears to be a simple black slab. Remembers the history of the world, and relates this to the Searchers after they unlock him. Has a tendency to randomly fall asleep.

A powerful red Dragon with a deep grudge against Moo.

A Suezo/Tiger hybrid who brazenly defies Moo by continuing to sail with his crew of Rockies (all Suezo/Golem types).

An Adventurer Archaeologist: She explores the various ruins of the world along with her pet toucan, Joy.

A Big Friendly Dog who lost his owner to Moo's forces. The subject of a tear-jerking episode.

A Hare/Pixie hybrid and one of Hare's long lost friends who was separated from him during their raid against the Baddies. After survived, she came across a group of orphaned children and helped raise them at the church since then.

A Hare/Worm hybrid and another of Hare's long lost friends. They reunite after the Searchers rescued him from a battle with some baddies which was actually staged as he's one of the baddies.

The second-strongest Monster in the Season 3 Tournament Arc, Poritoka is a White Suezo who is perhaps the biggest jerk in the series—selfish, arrogant, callous, and a bully. He has an incredibly strong spinning move.

The strongest Monster in the Season 3 Tournament Arc. Most is a White Mocchi and is hailed as a warrior/superhero. He acts on his own mysterious reasons, and tends to have a calm, stoic demeanor.