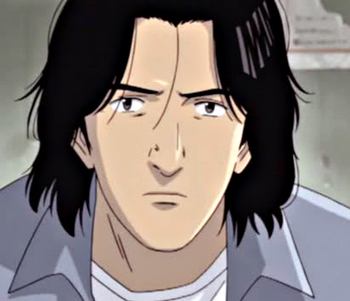 The protagonist of the series, he is a Japanese neurosurgeon working in Düsseldorf, Germany. In spite of his Director's explicit orders, he decides to operate on a critically wounded boy instead of the city's mayor, which results in his demotion and the break-up of his engagement. He is, however, shortly promoted after the mysterious murders of three of his superiors, and continues working at the hospital until it is revealed to him that the boy he risked his career to save is, in fact, a mass murderer. 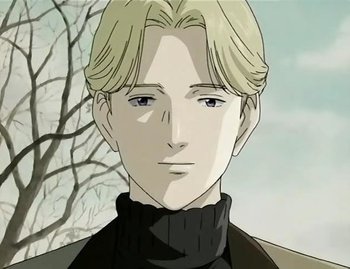 The main antagonist of the story, he is introduced as a ten-year-old with a bullet in his brain. Shortly after being saved by Tenma

, he escapes from the hospital with his twin sister Anna. He resurfaces nine years later as a killer, admits to having poisoned Tenma's superiors, and proceeds to wreak havoc across Germany. His identity is unknown to the general public, and his murders are subsequently blamed on Tenma.

He is alternately perceived note albeit mainly by delusional killers and Neo-Nazis as a vampire, an alien, the Devil, and the next Hitler. Both the manga and the anime open with a passage from Revelation that refers to the Anti-Christ and mirrors several events from Johan's life. 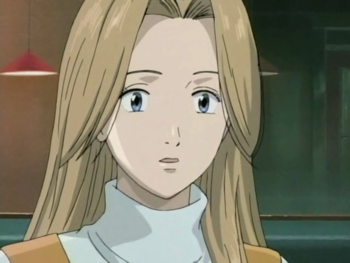 Johan's twin sister. After the incident in 1986, she is adopted by a couple from Heidelberg where she leads a normal life. When Johan decides to contact her again, Tenma foils his plan by helping Nina escape. Her foster parents are, however, killed by Johan's henchmen, and their murder sends her on a quest for vengeance, across Germany and the Czech Republic where she picks up the forgotten pieces of her past. 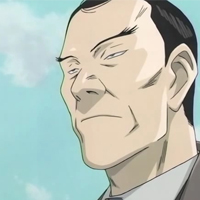 An agent of BKA (the German federal police), he is assigned to the case of the murders of the three Eisler Memorial officials. Believing Tenma to be the only logical suspect, but deterred by the lack of evidence, he resumes the investigation ten years later after an officer guarding one of Tenma's patients is killed using the same M.O. used on the three doctors. Personal pride, rather than an interest in justice, prompts him to chase Tenma across Germany and Czechoslovakia, concluding that 'Johan' is Tenma's alter-ego. 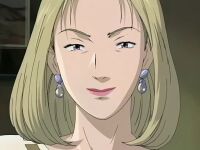 The daughter of the Eisler Memorial Hospital director, she is engaged to Tenma at the beginning of the series. When he falls out of favor with her father, she breaks off the engagement, but has a change of heart soon after Heinemann's death. Tenma's subsequent rejection leaves her embittered and with an advanced alcohol problem, and she spends the remainder of the story vacillating between love and hate for him. 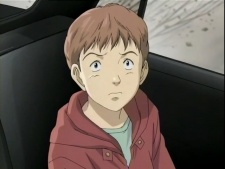 A young boy whom Tenma saves from physical and mental abuse at the hands of a former official of Kinderheim 511, he stubbornly tags along with the doctor (and, later, Nina), providing a foil to Johan. 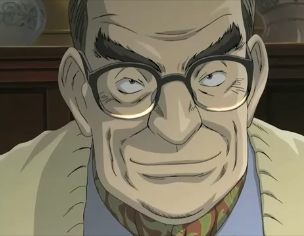 The director of Eisler Memorial Hospital. He cares only about the lives of rich and influential patients, and sees Tenma as someone whose skills can be exploited for publicity. 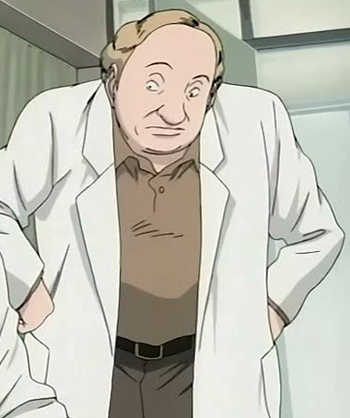 A colleague of Tenma's at Eisler Memorial Hospital, he is notable for being one of the few non-villains to hold hard onto his Jade-Colored Glasses even after long-term exposure to Tenma. 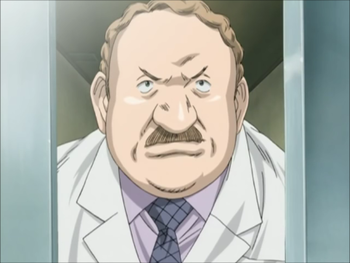 The Chief of Surgery at Eisler Memorial Hospital. He is Tenma's superior at the start of the story, and gives him orders on which operations to attend to. 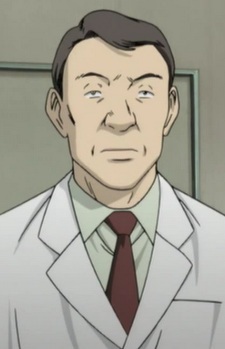 One of Tenma's colleagues at Eisler Memorial Hospital. Boyer sides with the director when Tenma falls from favor, and is promoted to Tenma's old position. It's a short-lived promotion, though... 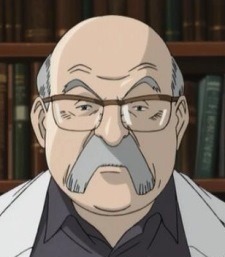 An elderly psychiatrist who becomes involved with Johan after the latter murders one of his patients. After being saved by Tenma from getting killed by Roberto, he becomes one of his main allies. 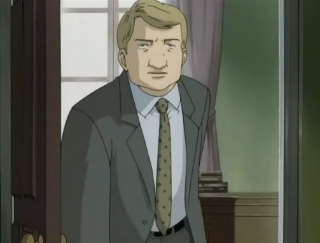 A former classmate of Tenma's, he is a leading criminal psychologist who attributes his proficiency to possessing the brain of a serial killer. After initially planning to turn Tenma over to the police, he realizes the latter's innocence and becomes an active helper in Johan's case, alongside his former professor Reichwein. 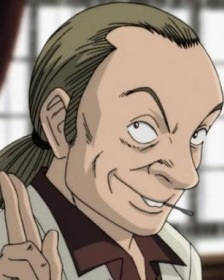 A small-time criminal who has a symbiotic, highly illegal, and fairly comical relationship with Tenma. 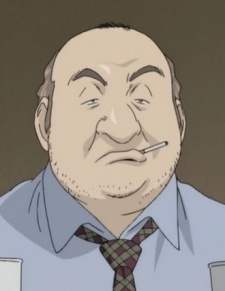 A senior reporter for the Heidelberg Post, he (initially reluctantly and skeptically) gets involved in Tenma's attempts to track down the twins. 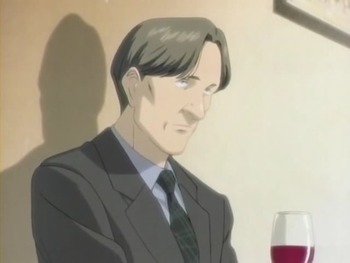 Also known as Klaus Poppe, Emil Sebe, and by many other pseudonyms, Bonaparta is responsible for the eugenics program that resulted in the twins' birth. When he wasn't busy kidnapping his test subjects' mothers and killing their fathers, he engaged in educating the superior children with the aid of morally questionable fairy tales he had penned himself. 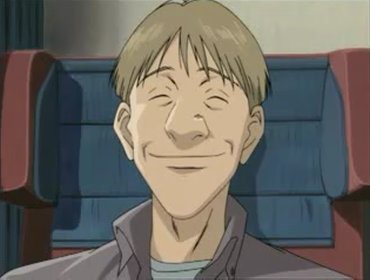 A perpetually smiling man searching for Franz Bonaparta, the man whose pedagogic theories formed the basis of the brainwashing program Grimmer had been subjected to as a child. Unable to feel emotion in his regular state (according to himself, although that doesn't stop him from trying to "fake it"), he transforms into a brutal and unstoppable alter-ego when under extreme duress. 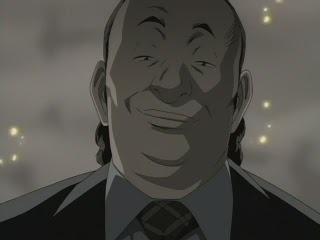 A survivor of Kinderheim 511, he takes on different identities during the series in order to eliminate witnesses and obtain information as one of Johan's most devoted henchmen. 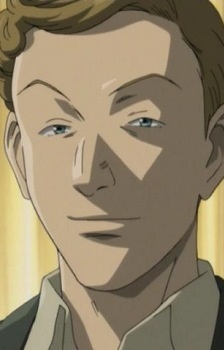 Johan's disciple and another Kinderheim 511 survivor. Johan and several associates try to turn him into a second monster.

The head of the organization, formerly a close associate of Franz Bonaparta.

A high-ranking member of the organization. He helps mastermind the plan to burn the Frankfurt's Turkish district.

Another founder of the organization, he's the one who sent Johan to 511 Kinderheim, before becoming disillusioned with the goals of the other members.

Another leader of the organization, he holds Nina hostage in an attempt to draw out Johan.

Two detectives who appear to Tenma and Nina not long after the deaths of Mr. and Mrs. Fortner. They quickly turn out to be on Johan's payroll. 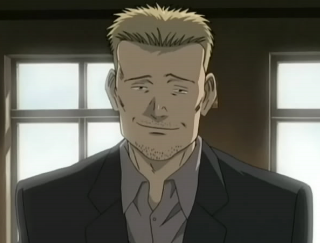 A criminal with a troubled past who is charged with looking after Eva when the mob discovers that she can be of use to them. 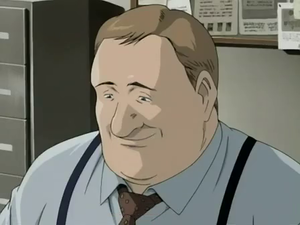 A corrupt Prague police inspector, and mentor to Jan Suk, who is oblivious to his activities. He is in cahoots with the underground Czech Secret Police, who are trying to find an audio tape of Johan from 511 Kinderheim, so they can use him to regain power and influence. 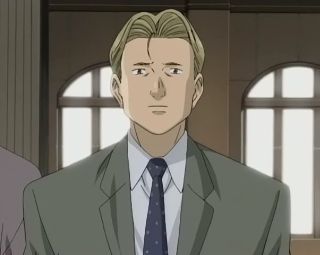 A young, idealistic Prague police officer who is unwittingly caught up in the chase for Johan. 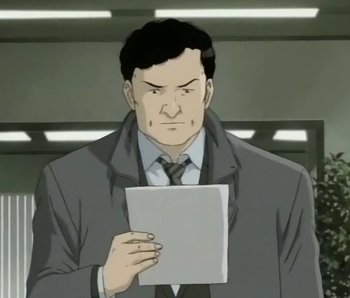 A private eye in Munich attempting to deal with his alcoholism and his past. His life went downhill after he shot an alumnus of Kinderheim 511. 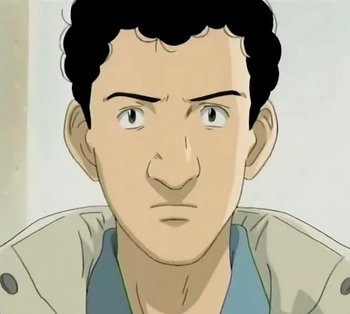 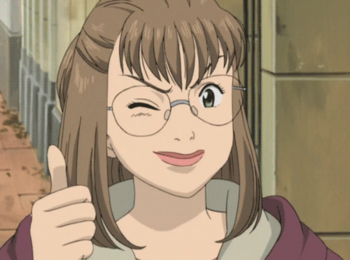 An anthropology major at Munich University. In her attempts to help Karl, she soon finds herself stumbling into a much bigger story than she expected... 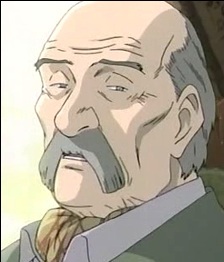 A mysterious business juggernaut with a sentimental past, he is the center of one of Johan's extremely elaborate plots to wreak large-scale havoc across Germany. 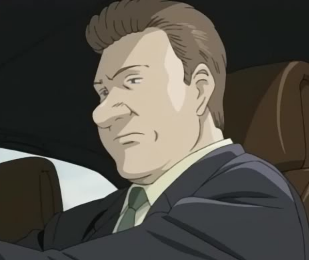 An extremely talented lawyer known for always getting innocent verdicts. In fact, he only takes on clients if he believes they are innocent. His desire to free innocent people is rooted in his childhood, when his father was accused of being a spy.