Characters from the TV series Monk. 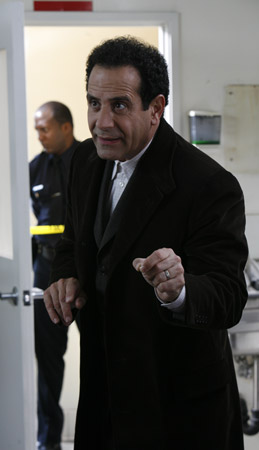 I don't know how you did it, but you did it. You created this TV Tropes page.
Played by: Tony Shalhoub

The main character of the series. He is a former San Francisco police inspector who suffered a nervous breakdown after the murder of his wife, Trudy. He is a lifelong sufferer of Obsessive-Compulsive Disorder and has many phobias, and those obsessions became crippling after his breakdown, forcing his retirement; he recovers throughout the series, though he is never fully "cured". His OCD is also the reason Monk was such a successful policeman; one of his compulsions is paying amazing attention to details.

Thanks to his breakdown, Monk was discharged from his department, but is frequently called in to consult on cases which baffle the police, often some kind of Locked Room Mystery, by his friend and former commander Captain Stottlemeyer. His disorders are part and parcel of his unique mind; without them, he wouldn't be able to solve these cases. Of course, the one case Monk's been trying to solve since his breakdown is Trudy's murder, and each season of the show brings him a little closer to finally solving the mystery behind her death (with the show's final season bringing the case to a close for good). 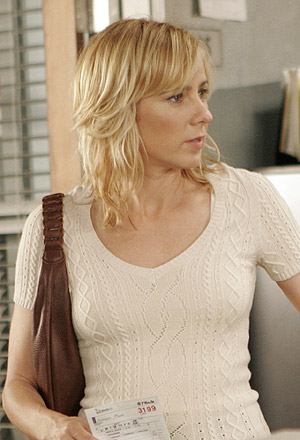 "Detective Monk, why don't we solve my case first, all right? Then we can come back here and figure out who killed Ogg, okay?"
Played by: Traylor Howard

Monk's personal assistant starting with the second half of Season 3.

Unlike the other characters, Natalie is the only one to come from an upper class background. In her case, she was born in Monterey in the 1960s, child of Bobby and Peggy Davenport. She had one sibling, a brother named Jonathan. Her grandfather, Neville Davenport, was a former chemist's assistant, who eventually got an epiphany and founded his own toothpaste company, now the third largest in the world.

In the early 1990s, Natalie married a Navy lieutenant commander named Mitch Teeger. With him, she had one child, a daughter named Julie, named for Mitch's aunt. The resulting marriage also strained Natalie's relationship with her family. Their marriage lasted seven years, until 1998, when Mitch was killed in combat in the Kosovo War.

Over the next seven years, Natalie bounced around between a number of odd jobs, like blackjack dealer, office worker, and housesitter, but nothing stuck.

In her first episode, "Mr. Monk and the Red Herring," Natalie is working as a bartender and living in the Noe Valley neighborhood of San Francisco. Her life changes when her house is broken into twice in the span of a couple of days: the first time, a man posing as a water meter inspector comes in, but quickly flees when she catches him snooping around in the living room. A few nights later, a second man breaks in through a side window. Natalie is awoken by a noise, and when she goes down to investigate, the intuder, Brian Lemmon, attacks her. Natalie is forced to kill him in self-defense with a pair of scissors. Captain Stottlemeyer and Lieutenant Disher are baffled upon learning that this is the second intruder in less than a week, and they suggest Natalie take her case to Monk, who is currently trying to get over Sharona's departure from his life and looking for replacements. Monk is intrigued by Natalie's case, and comes in to help.

Throughout his investigation, Monk is impressed enough by her, and her similarities to Sharona, that he asks her if she wants to become his new assistant. At the end, when Monk is forced to choose between grabbing a valuable moon rock or Julie's pet fish, he chooses the fish, and this is the final factor that convinces Natalie to join Monk and leave her life of bartending. 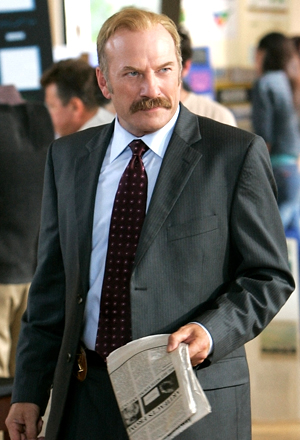 "How do you know that?"
Played by: Ted Levine 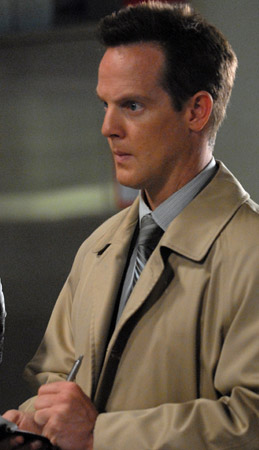 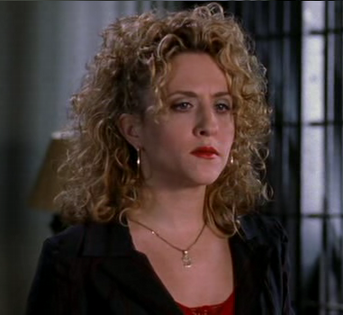 Monk's nurse and first assistant, from Season 1 through the first half of Season 3. Originally from New Jersey, she's a single mom with a son named Benjy. Unlike Natalie, she always called Monk by his first name.

Adrian Monk's beloved late wife, whom he met in college. She was killed by an explosive device planted under her car. Trudy's unsolved murder is one of the main sources of Monk's constant neurosis. 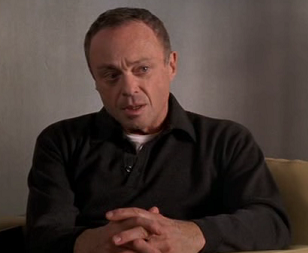 Natalie's teenage daughter. Introduced alongside Natalie in "Mr. Monk and the Red Herring". 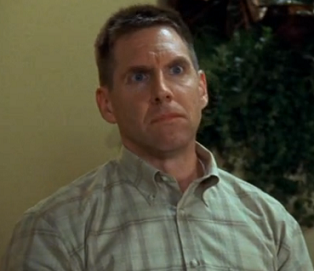 A fellow patient of Dr. Kroger's and later Dr. Bell's who spars with Monk on several occasions. He has similar obsessive-compulsive tendencies like Monk, but they quickly become unfriendly rivals.

Monk's new psychiatrist beginning in Season 7. This role was cast as a result of Stanley Kamel's death in 2008.

Monk's Arch-Enemy, Dale is a disgustingly fat (he's around eight hundred pounds for most of the series) financier and Diabolical Mastermind. Despite being so huge that he is unable to walk, Dale is both a genius and extremely wealthy; episodes imply that he "owns half of San Francisco." As detailed below, Monk has particular hatred for Dale, as the villain caused Trudy a huge amount of grief.

Adrian's older brother. He suffers from agoraphobia (a fear of open spaces) and hasn't left his house in 32 years as of his first appearance in the series. He appears in three episodes - "Mr. Monk and the Three Pies", "Mr. Monk Goes Home Again", and "Mr. Monk's 100th Case".

Kevin Dorfman is one of Monk's neighbors. 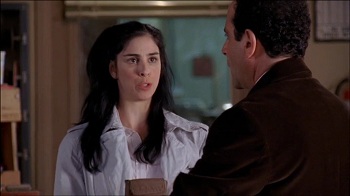 Monk's obsessed fan. First shows up in "Mr. Monk and the TV Star", where she is an obsessed fan of the Crime Lab: SF lead Brad Terry, to the point that she takes the rap for him for his killing of his ex-wife. But Monk eventually figures it out, and her obsession of interest changes to Monk.

In "Mr. Monk and His Biggest Fan," Marci's obsession for Monk has reached an extreme: she has plastered his image all over her walls, she's furnished her house with furniture he throws out, she wears his recycled clothing, she appears to be responsible for naming the episode titles. It goes well until her neighbor across the street, Debbie Ringel, is apparently mauled to death by a dog. The police suspect Marci's pet dog Otto, but Otto turns out to have been deceased for three days. Desperate, she turns to Monk for help, willingly breaking a restraining order imposed against her by "buying" Monk at a police bachelor auction. Monk eventually proves that John Ringel was responsible for framing Otto, but after Ringel takes Monk and Marci hostage, in a situation that leads to Marci getting a bullet in her left shoulder, she loses interest in Monk and takes up a new interest in the form of F. Murray Abraham ("May God have mercy on his soul").

Stottlemeyer's first wife up through Season 4.

Linda Salvato Fusco is introduced in "Mr. Monk, Private Eye" as a realtor. She hires Monk and Natalie to investigate damage done to her Buick. During the investigation, she also runs into Stottlemeyer, and sparks fly very quickly between the two of them, her recognizing him as a divorcee like herself. She even sets up Stottlemeyer with an apartment across the street from her own.

In "Mr. Monk and His Biggest Fan," Linda returns, though her part is minor. Their dates are often interrupted, postponed, or canceled as a result of Stottlemeyer's police duties. This reaches a point where she resorts to "buying" him at a Bachelor Auction (this is the same one that Marci Maven "buys" Monk at). Their dinner date is interrupted by Stottlemeyer realizing the solution to the case in the middle of dessert.

In "Mr. Monk and the Bad Girlfriend," Linda has moved to a suburban house in Richmond, and that, plus Stottlemeyer's work hours, force them to limit their dates to webcam dates every night at 6:30 PM. They are planning to go to Hawaii, but before they do, Linda's real estate partner Sean Corcoran is shot and killed while giving an open house tour in Marin County. Monk and Natalie are sent to investigate, but it is only after Monk and Natalie take a single visit to Linda's office that they realize she is the killer: she has the motive, the means, the ability, and opportunity to have committed the murder (a picture of her in her office wielding a shotgun, the very shotgun used as the murder weapon; Sean was planning on starting his own company and would have taken a lot of their clients with him; she matches the killer's description in regards to height, even wearing a certain shade of lipstick that one witness remembers; and she has a house key).

Unfortunately, no one believes Monk and Natalie because Linda was ending her webcam date with Stottlemeyer (which Monk and Natalie had eavesdropped in on at the end) twenty minutes before the shooting, and the time window is not large enough to give her ample time to go from her house to the crime scene and get into her hiding place.

Eventually, Monk finds incriminating evidence against Linda by having Natalie lure her away while he searches her house. Through a sting operation, Monk and Natalie then entrap Linda at her and Stottlemeyer's send-off party. Linda is arrested, and Stottlemeyer is left wondering whether the relationship was legitimate or not.

Stottlemeyer's love interest in the second half of Season 8, and eventually his second wife.

A federal agent of the ATF and FBI, that Stottlemeyer clashes with. Appears in two episodes, "Mr. Monk and the Sleeping Suspect" and "Mr. Monk Gets Cabin Fever," and is mentioned in several others.

Natalie's wealthy parents. They appear twice, in "Mr. Monk Goes to a Wedding" and "Mr. Monk Is At Your Service".

The officer who took over for Randy after he moved to New Jersey. A former undercover cop, Devlin is no-nonsense, independent, and not easily impressed. However, she does become a helpful ally.
SPOILER CHARACTER

The final antagonist of the series. Rickover is a corrupt judge who had impregnated (Monk's future wife) Trudy with a bastard child, way back when he was her law professor in college. Years later, he conspired to have Trudy murdered just so that he could cover up his infidelity. But it's not until the series finale does Monk discover the whole truth about his wife's death.