Denizens of the now-defunct Minecraft Troper Server run by ArcanGenth and later Redwhitenblue. It's Spiritual Successor is administered by Flaminghello who will whitelist you upon request. 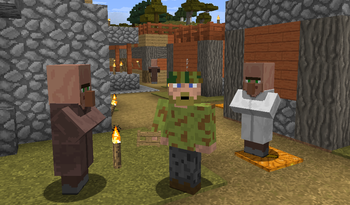 Proprietor of Port Baker Estate. And the world.
Lord of the Semperpax Isles. Often procrastinates and hangs out around other players' settlements. Created and currently owns Bethelehem, the third known NPC village.

Vesper_Noir (Naomi Hansen)
A (somewhat) quiet Oregonian, who dreams to find (i.e., build) a mythical sky city called Pruina. Oh, and shoot down every hostile mob that gets in her way.

Joesolo (Joesolo)
pvtnum11
Pvt usually can be found caretaking his small farms and dreaming up new ships to make.

Tropes associated with either Pvt or his builds:

Lives under a mountain, which he calls his own. Spends a lot of time digging mines under the mountain, searching for things like iron, gold, and diamonds (and collecting more cobblestone than he knows what to do with in the process).