These are the heroes of our story, and the characters who help them out.

Read on, or go back to the main character page.

The three main characters of the series. There's Max, The Hero and Chosen One of prophecy. Next is Norman, the guardian of the chosen one and possibly the greatest warrior in all the world. Last is Virgil, the mentor to the chosen one and seer who predicts the future to know when and where Max is needed.
Mighty Max 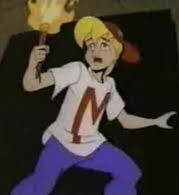 The central character and The Hero. As the Mighty One, it's his destiny to defeat Skullmaster and save the world. So says prophecy, anyway. As far as Max is concerned, he's just an average 11-year-old boy caught up in a destiny he doesn't want. 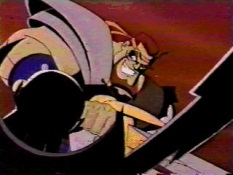 A 10,000 year old warrior who has been charged with becoming the guardian of the Mighty One, though he has also served many other roles in history, Thor and Lancelot among them. As Virgil says, he protects Max from the "minor inconveniences that pop up from time to time."

Like Virgil, he was in all but a small handful of episodes and had a number of toyline appearances later on. 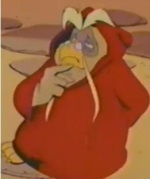 "I am very wise, and will train you in the ways of being a hero - my specialty."
- Virgil

An ancient Lemurian who serves as mentor to the Mighty One. He was once Skullmaster's friend and mentor, and he was the sole survivor when Skullmaster eradicated the rest of the Lemurian race. He has spent the last 10,000 years trying to defeat Skullmaster and repay his treachery.

Virgil appeared in all but a small handful of episodes. He also made several toyline appearances, though not until after the cartoon took off. His voice actor even lent his talent to a couple of the later toy commercials.

Max lives at home with his single mother, and no known father figure. Though he doesn't have any siblings he does have a number of friends from school, some of whom have even gone on adventures with him.

An archaeologist who is often away from home. She unknowingly sent Max the cosmic cap at the beginning of the series and is one of the few people in his town who know that he's the Mighty One. She also manages to get pulled into a few of his adventures, whether intentionally or not.

Along with Felix, Bea is one of Max's two best friends. Compared to Max she is far more intelligent and level-headed and she has aided (and even saved) Max on multiple occasions. Although a major character in the show, Bea never appears in any of the toys. She is, however, a playable character in the Licensed Game.

Along with Bea, Felix is one of Max's two best friends. Although he's always willing to help Max out he usually gets left behind before the adventure actually kicks off. Like Bea, Felix never appears in the toys but is a playable character in the Licensed Game. This doubles as the only time we see him take an active role in Max's adventures.

A Nerd from Max's school. He's assigned as Max's study partner in "The Brain-Suckers Cometh" and manages to drive Max so crazy that he asks for a new partner. Despite his annoying tendencies, he still manages to get recruited to help against the titular brain-sucking aliens in lieu of any other ideas, and ends up creating a computer virus to destroy their spaceship.

A short-lived crush of Max's. She had a prominent role in the episode "Snakes and Laddies", when she was kidnapped by monsters after unwittingly taking a gift of a mystical ankh.

Gregory Harper was nicknamed Gadge by his classmates because of his uncanny ability with electronics and gadgets, an ability which actually came from his psychic power of telekinesis which allowed him to manipulate machines from the inside to make them do whatever he wants. When the villain Dr. Zygote discovered this, he kidnapped the kid and tried to use his DNA to advance his experiments. After being rescued by Max the two ended up becoming friends.

Gadge appeared in the episode "Zygote Music", when he helped save the day from the evolution-obsessed Mad Scientist.

These are the four great heroes of the world who aided Max in the season one finale, "The Maxnificent Seven." They are Beowulf from Europe, Mujaji from Africa, Yona-Ya-Yin from America, and Hanuman from Asia.

"Let me show you a little trick I once taught a guy named Grendel!"
- Beowulf, to Warmonger

The old Scandinavian hero who fought and slew Grendel with his bare hands, now a failed wrestler. He's the first of the four heroes that Max collects during his Retired Badass Roundup in the Season 1 finale "The Maxnificent Seven." He teaches Max the heroic attribute of spirit.

A Native American shaman and warrior known as the "Hunter of Monsters." He is the second of the four heroes gathered by Max in the Season 1 finale, and he teaches Max the heroic attribute of focus.

The monkey king of Hinduism, who decided he no longer wanted to be a hero and thus resided in a zoo. He is the third of the four heroes gathered by Max in the Season 1 finale and he teaches Max the heroic attribute of wit.

"So, who's a paper pusher, boy?"
- Mujaji, after wrestling a charging rhino to the ground

An African warrior princess believed to be an incarnation of the goddess known as Mujaji the Rain Queen. At least she was, until she retired from being a hero and became a game warden. She is the last of the four heroes gathered by Max in the Season 1 finale, who teaches him about the heroic attribute of intuition.

"So, tell me, little one... is there any reason I shouldn't toss you into that lava pit?"
- Lava Lord, upon first meeting Max

The former ruler of the underworld which exists at the Earth's core. When Skullmaster was brought to Skull Mountain by the previous Mighty One his first act was to overthrow Lava Lord and seal him in stone, then take control of the underworld. Lava Lord is released from his confinement at the beginning of the second season. 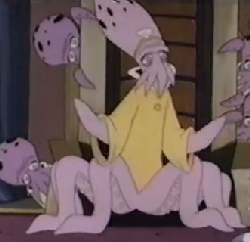 "Trash. You throw it away, we find it. Tastes good too. You aren't going to hurt us, are you?"
- Kalamarus, when asked how he understands English

The ruler of a species of humanoid cephalopods who have been trapped in a cave at the bottom of the ocean for 1,000 years thanks to a vicious giant squid. When Max and company go to investigate the disappearance of ships in the area they come across Kalamarus and his people. Together, they defeat the giant squid, making the waterways safe and rescuing the squid people from their imprisonment.

Kalamarus appeared in the episode "Less Than 20,000 Squid Heads Under The Sea". He was based loosely on the villain Kalamarus from the doom zone "Mighty Max Caught By The Man-Eater."

''"Werewolf? Aye, that I am: one o' the immortal were who've protected Dunnglen since time immemorial. But murderer? I'm innocent!"
- Cameron

A Scotsman who is really a werewolf, one of the immortal creatures of Dunneglen. He and his pack were being hunted by a mysterious monster, and one by one, the others vanished, until he alone remained. The constable had taken him as a suspect, leaving Max to clear his name and rescue his pack. He appeared in the episode "Werewolves of Dunneglen".

A neanderthal from ancient times who was granted super-strength, invulnerability, and immortality by a meteorite. The meteor gave these same powers to a sabertooth cat, turning it into a fearless monster that preyed on everything it came across, even humans. Realizing how dangerous the cat was, Gor sealed himself and the beast away in a cave. When the cave is unsealed by construction workers building a subway tunnel the cat escapes and Gor joins the heroes in the quest to hunt it down.

Gor appears in the episode "Tar Wars" and is based on an enemy from the doom zone "Mighty Max Grapples With Battle Cat".

An archaeologist who unwittingly summoned the demon god Lao-Chu Shenwan, Emperor of the Rats, and was subsequently possessed by him. He appears in Lao-Chu's maze as a spirit, having been forced out of his own body, and helps Max and friends to find and shatter the red jade heart that ties Lao-Chu to this world.

Ki Wan appeared in the season 2 episode, "The Year of the Rat."

Freed from his imprisonment but having left his minions behind, Skullmaster traveled to Dragon Island to recruit some new followers. Promising power and glory, Skullmaster tricked the people into drinking dragon's blood which transformed them into mindless Lizard Folk. Tamori drank the dragon's blood reluctantly, but would not give himself up to evil and so only partially transformed, gaining repitilian features but retaining some of his humanity and his free will. Seeing what had happened to himself and his people, Tamori fled the island to seek out the legendary Mighty One so that he could rescue what was left of his tribe.

Tamori appeared in the episode "Blood of the Dragon." He and the creatures his people became are based on the zilards from "Mighty Max Storms Dragon Island."

A rich Texas oil tycoon. After a bunch of his oil tankers all went missing in the same spot he commissioned the creation of a high tech submarine to try and find the cause. After discovering the ships were attacked by a giant squid and meeting a civilization of friendly squid people in an undersea cavern he reluctantly helps the heroes and the "squid-heads" defeat the giant monster.

Ollie appeared in the episode "Less than 20,000 Squid Heads Under The Sea". Although he never appeared in the toys, his submarine's design seems to have been based on part of Dr. Kalamarus' submarine from "Mighty Max Caught By The Man-Eater".

The ruthless CEO of the world-spanning corporation MegaCorp. His ruthless business practices directly led to the creation of the supervillain Cyberskull. He tries, with little success, to be useful against said villain, but mostly just gets in the way. He appears in the episodes "The Cyberskull Virus" and "Cyberskull 2: The Next Level."