The Warriors for Hire 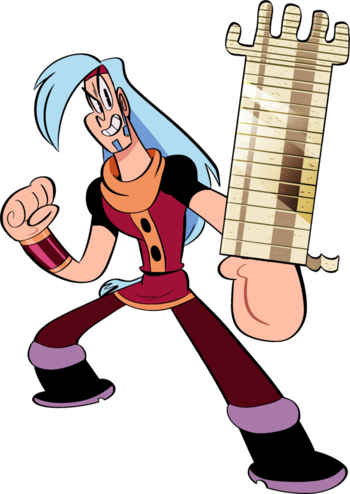 Voiced by Kyle Carrozza
One half of Warriors For Hire and younger brother of Vambre Warrior. Though he's always eager for a battle, Prohyas tends to be more empathetic and compassionate than his more masculine sister. He cares a lot for his magiswords and hence he shares a close relationship with both Dolphin Magisword and Zombie Pumpkin Magisword. 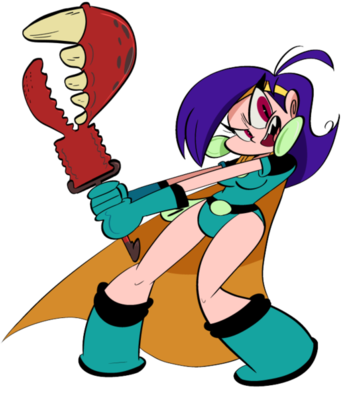 Voiced by Grey DeLisle
One half of Warriors For Hire and Prohyas' elder sister. She's much more masculine then her brother and possesses a fondness for books, specifically the Veronica Victoria series. She speaks with an inexplicable British accent. 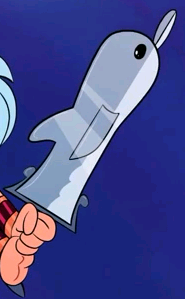 Prohyas' first ever magisword and one of his signature weapons. 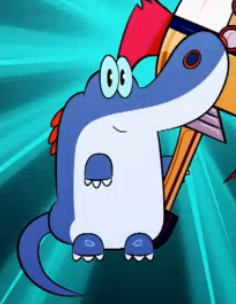 Voiced by Kyle Carrozza
A small, innocent dragon who lives with the Warriors as of the short "The Desolation Of Grup". He and his friends Skullivan, Lady Hiss and Prug are known as the "Cave Weirdos", and work at The Cave of Stuff, a dungeon for level one adventurers.
Mr. & Mrs. Norman and Kablammica Warrior

The father of the Warriors for Hire. A simple broccoli farmer, Norman seems to wish that his children were helping him at the farm instead of adventuring.

The mother of the Warriors for Hire. She was an adventurer before she settled down to start a family with Norman and approves of her childrens' profession. 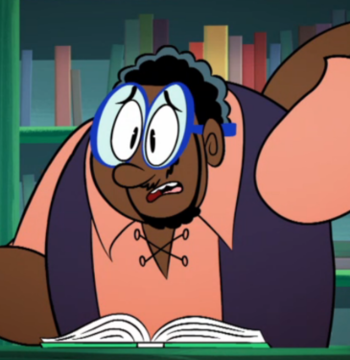 Voiced by Phil La Marr
The shy nerdy owner of The Printed Page Bookshop who has a massive crush on Vambre. He owns the Swish Navy Magisword and has a fear of social interaction. He comes to Prohyas and Vambre for Magisword training.
Princess Zange 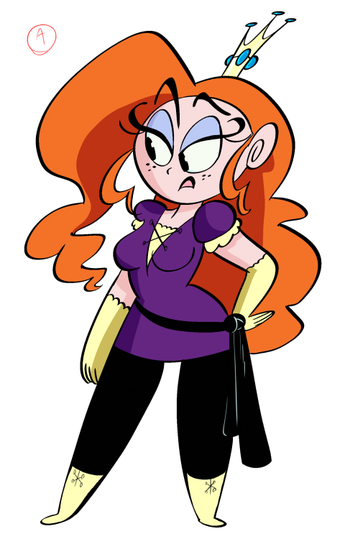 Voiced by Grey DeLisle
The princess of Rhyboflaven and the Warriors' most important client and friend.
Ralphio 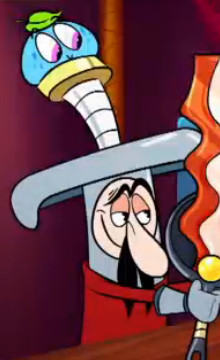 Voiced by Doug Lawrence
The greedy owner of Ralphio's House of Swords, who supplies Vambre and Prohyas with all their magiswords. He has a pet slime named Wobbles who helps him out around the store.
Witchy Simone 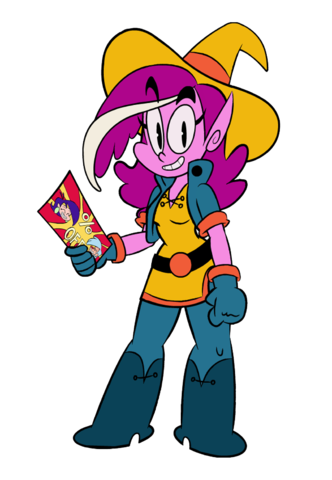 Voiced by Lindsay Carrozza
A close friend of Vambre and Prohyas from Adventurer Academy who dropped out and is currently trying to pass the entry exam to get back in. Until then, she works at Prohyas' favorite fast-food restaurant, Slugburger. She as of "Sibling Sorcery" now recently owns the Golden Broomstick Magisword given from her younger sister, Witchy Sparkles.
Zombie Pumpkin Magisword 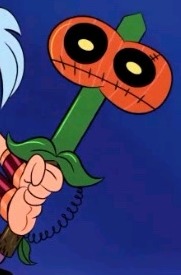 Voiced by Kyle Carrozza
A sentient magisword Vambre and Prohyas find in Transylberia with powers primarily focused on fighting plants.

The Cave Weirdos
The monsters who maintain the Cave of Stuff along with Grup.

Tropes Shared By All 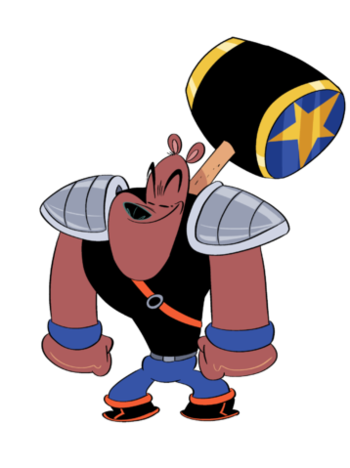 Voiced by Townsend Coleman
An arrogant and slightly dim-witted warrior bear adventurer. Living through a life of adventuring and borrowing food from picknickers after graduating Adventure Academy, Neddy strives to find all treasure as clear as the school's motto, "Fortune favors the bold".
Mr. Spoony 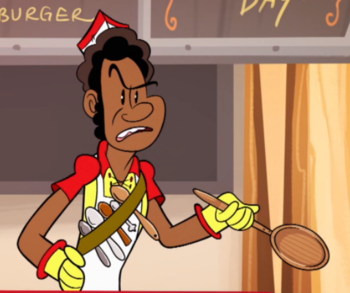 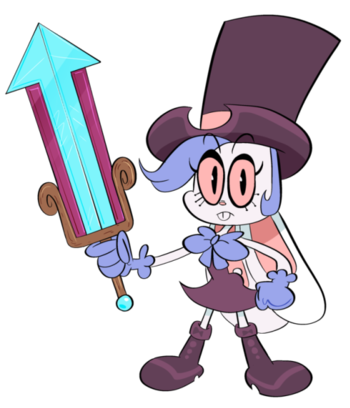 Voiced by Michaela Dietz
Originally part of a three-rabbit team involving Hoppus and a third member who went power mad. She works to get Hoppus to come back to their home village despite him refusing. 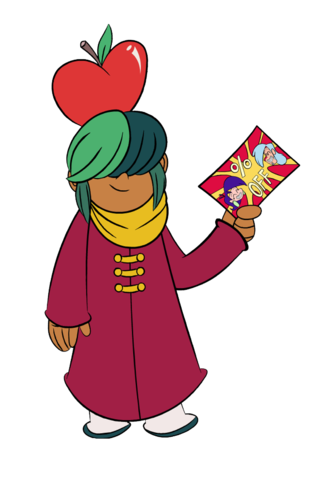 Voiced by Grey DeLisle
A rare food enthusiast and chef who often sends the Warriors to retrieve ingredients for her recipes.
The Mysterious Hooded Woman 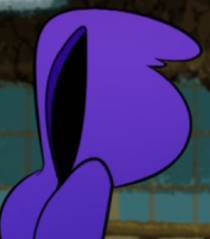 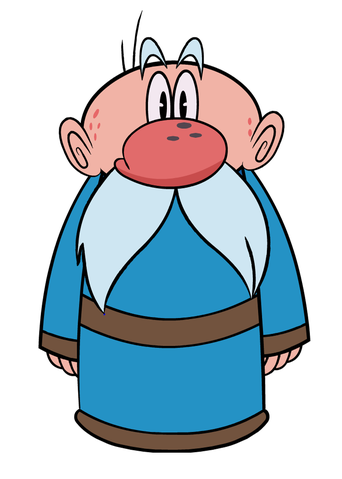 Voiced by Kyle Carrozza
A crazy old man who always hires the Warriors to perform menial chores.
Omnibus the Accumulator 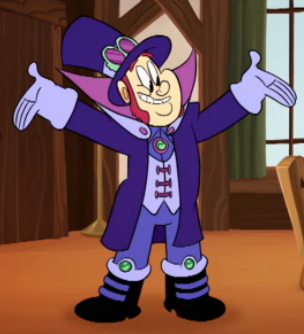 Voiced By Hal Lublin
An individual magician who resides in a massive mansion where he collects rare magic artifacts.
Teri Gargantuan
Voiced by Pete Holmes

The guardian of the Spiderweb Magisword and mother of Traci, Bobbipher and Logan, whom the latter works as a janitor for Thaddeus Thirdwell III's corporation in Galacton.

Flonk
Voiced by Paul Schrier
A former grade-school chum of the Warriors. The playground bully, he's since "gone pro," running protection rackets of varying degrees of success. Also fancies himself a comedian.
Frostferatu
Voiced by Dave Gruber Allen
The Lord of Snowmanpires who lives in an icy castle in Transylbiria.
Hoppus 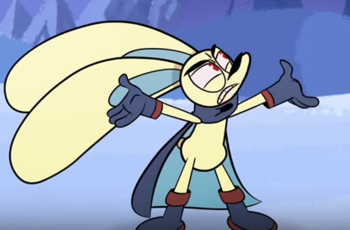 Voiced by Eric Bauza
A rabbit mercenary who aims to collect and own all vegetable magiswords. He is regularly hired by the Rhyboflavin royalty to deliver messages to the Warriors at times.
King Rexxtopher 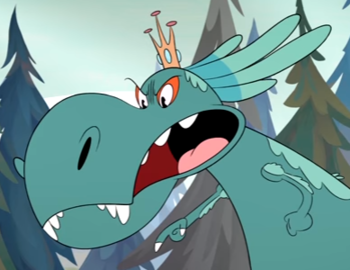 Voiced by Eric Bauza
The T. rex king of the Dinosaur Kingdom. He hates the Warriors for having previously attempted to steal (and eat) one of his dinosaurs.
Man Fish the Fish Man 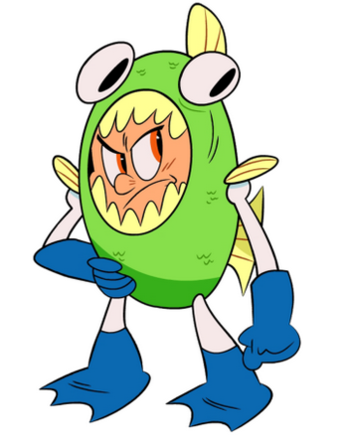 Voiced by Bill Kopp
An odd french individual who lives in the ocean and protects its wildlife.
Nohyas 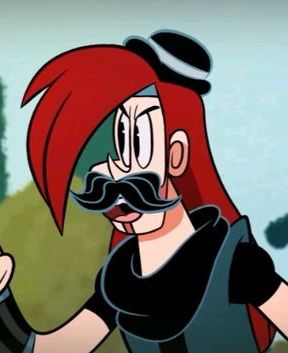 Voiced by Kyle Carrozza
Prohyas' evil twin. He genuinely seems to think that he actually IS Prohyas (even when Prohyas is right in front of him). He sports a hand puppet of Vambre he named "Handbre" who speaks French.
Penny Plasm 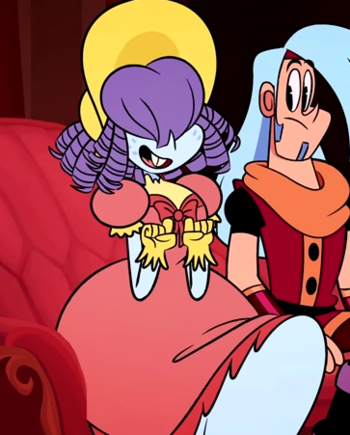 Voiced by Kate Micucci
A ghost girl who lives in a haunted house in Transylberia. She falls in love with Prohyas and tries to murder him so that he can become a ghost along with her.
Phil the Pilferer 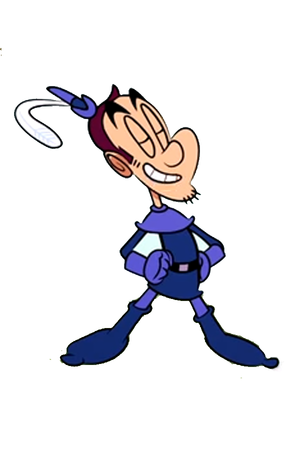 Voiced by Eric Bauza
A short thief who constantly steals from the Warriors. He is also a member of a cult called the Brotherhood of Thieves and strives to be the top thief in Lvsheria.
Witch Way 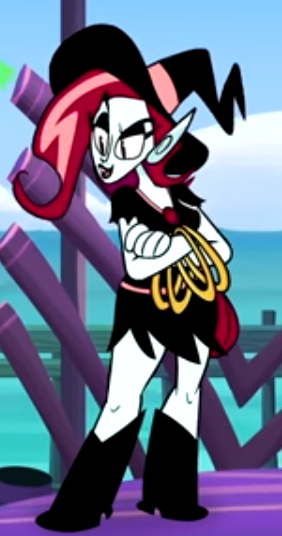 Voiced by Candi Milo (originally), Mary Faber (currently)
One half of Witch Way. She possesses a bad temper and is prone to shouting and exaggerated facial expressions. 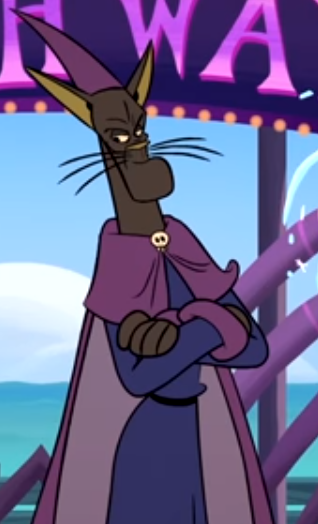 Voiced by Arin Hanson
One half of Witch Way. He is much less interested in revenge than Morbidia.
Francis Thingshooter
Voiced by Kyle Carrozza

A hunter who tried to mount Teri Gargantuan on his wall, but was stopped by Prohyas and Vambre. 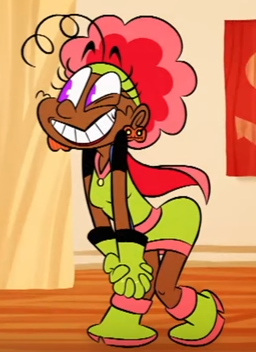 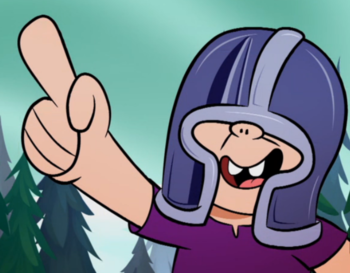 The librarian at the Library of Shhh! who makes sure everyone follows the rules, otherwise she and her sasquatch, Monkey Chunks (also voiced by Carrozza) step in and take action.

Voiced by Rider Strong
The most stoic and pessimistic of the duo. According to him, he enrolled to find something he's good at other than being innately agile.

Voiced by Kate Miccuci
The most timid and cowardice of the duo. According to her, she enrolled because she doesn't know what she wants to be, so she decided to follow her family business of adventuring.
Officer Zidane Fordor
Voiced by Kyle Carrozza
Head of the Rhyboflavin Police Department who often captures the wrong criminals at times. Despite this, the prison facility he sents the criminals to offers rest and relaxation.
Vambre's Brain 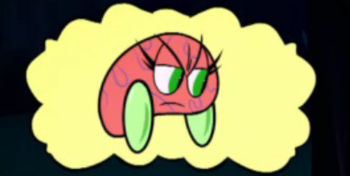 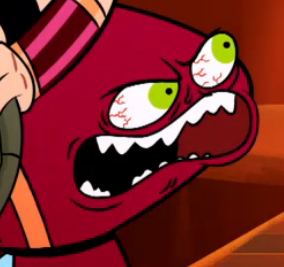