Various alien creatures in the series, with little purpose to their existence other than to feed and/or survive.

"The dominant species of planet SR388, Metroids are energy-based parasitic predators. A Metroid will latch onto its prey and drain energy, growing larger as it does. The only way to shake an attached Metroid is to enter Morph Ball mode and lay a Bomb."
—Metroid Prime's Logbook

The series' eponymous bio-form, engineered by the Chozo for the sole purpose of combating the most dangerous parasitic organism in the universe. The X. As an energy leeching predator, they either hatch from eggs laid by a Queen and evolve through a complicated metamorphosis into beasts capable of untold destruction, or divide by mitosis upon exposure to Beta rays; and are therefore an object of power to those who would harness their incredible abilities for war and profit. Or else revolutionize energy usage and consumption till the end of time. 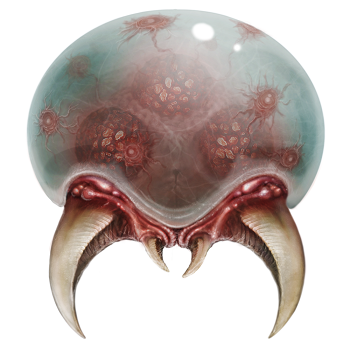 "I next fought the Metroids on their home-world of SR388. I completely eradicated them except for a larva, which after hatching, followed me like a confused child..."
—Samus Aran 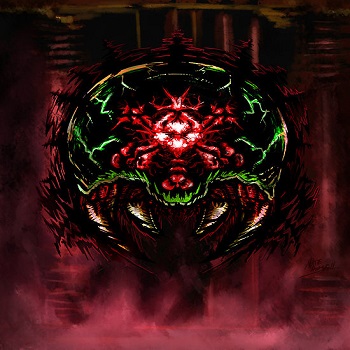 The Last Metroid
The X

"The creature took on the host's memories, appearance, abilities, everything. It sucks everything dry. Utterly terrifying. Can you not see that if a mimic such as this were to infiltrate a population, it could replicate almost indefinitely! With evil taking the form of an ally, the galaxy could be overthrown. It is truly the worst kind of evil... it has no name, but... we call it X."
—Old Bird 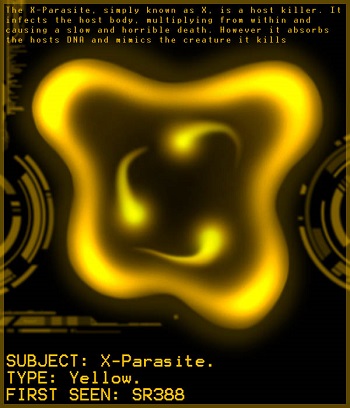 Man, is the warmest place to hide.
Parasites that evolved on SR388, where they began to greatly endanger the planet's ecosystem by throwing it out of balance. Metroids were their main predator, until all of the Metroids were wiped out on SR388, allowing the X to make a recovery in their population and return in Metroid Fusion.

"It was the end of peace on Aether, for a new race was born that day on the dark world... one filled with hate and terrible power. They are the Ing."
—U-Mos 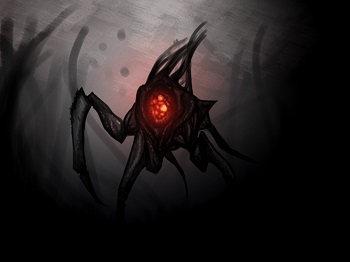 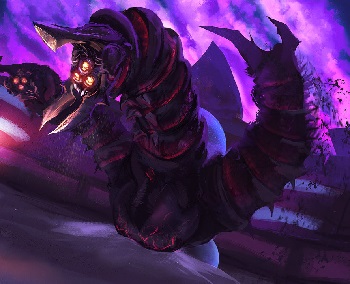 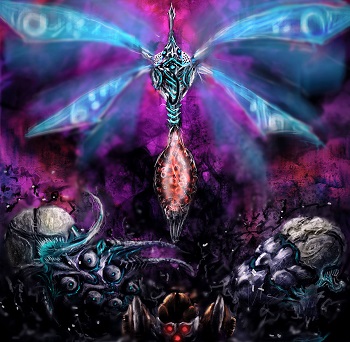 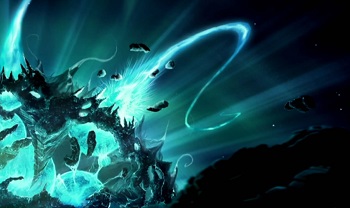 The Great Poison
Initially thought to be an strange yet exploitable energy source, Phazon is really a lifeform in itself. It spawns as living meteors known as Leviathans from its parent planet, called Phaaze, slowly swallowing all life and corrupting the planet so the cycle can repeat.
Metroid Prime / Dark Samus

"Investigations into a possible ingress point for the impact crater continue to meet with failure. The shield of strange energy that protects it is impermeable, and all attempts to tunnel past it have proved fruitless. Our continued futility in this matter is made all the more significant in light of recent life form readings we've discovered emanating from deep within the crater. Analysis of the readings indicates that a massive creature is gestating in there, absorbing enormous amounts of Phazon from the Phazon core at the heart of the impact crater. This discovery makes accessing the crater doubly important - not only will it open the door to the vast deposits of Phazon within, but it will also lead us to this creature, whatever it may be..."
—Log 11.156.9
"Our scanners have detected the remains of Dark Samus, who has revived herself within our Phazon storage. Surely, we are cursed. The fiendish shrew consumed all of the Phazon, then wiped out a third of the crew in a matter of minutes. Now she moves at will through the halls of Colossus, using her witchery to beguile the minds of my men. We are unable to call for aid, and only a few of us remain to stand against her. All is lost."
—Captain's Log

A metroid that encountered a strange meteor that landed on Tallon IV. It is the reason Tallon IV is slowly being corrupted by the Phazon but Samus manages to stop its ingress by recovering the Artifacts and fighting it within the Impact Crater.

Though it was thought destroyed by Samus, the remains of its body fused with Samus's stolen Phazon Suit and traces of her DNA, being reforged and reborn as "Dark Samus", a being that has same abilities as the Hunter but empowered with Phazon. With its newfound power and intelligence, it now seeks to find the source of the Phazon and harness it for its own gain. 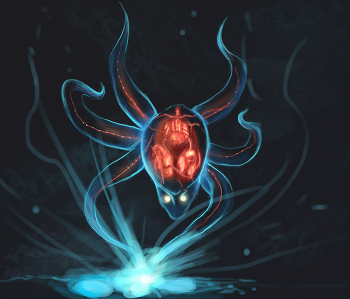 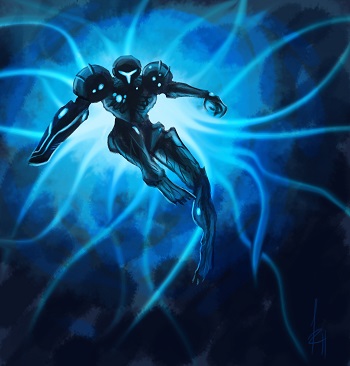 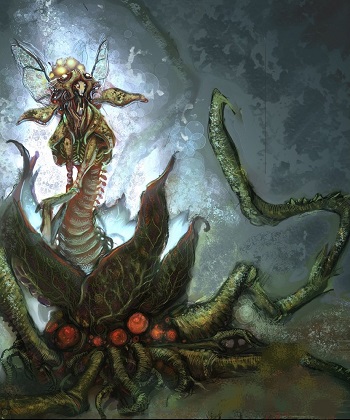