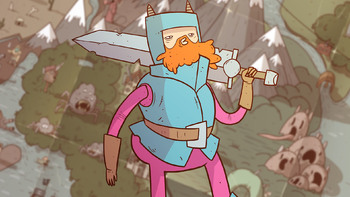 The Brave
A mighty knight whose lavish beard and pink tights strike fear into the hearts of his foes.
Greybeard 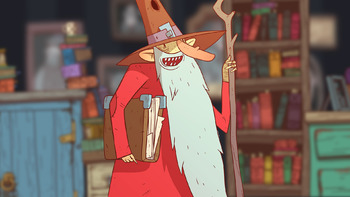 The Wise
A powerful wizard and resident old guy at the Meteorfall Tavern.
Advertisement:
Mischief 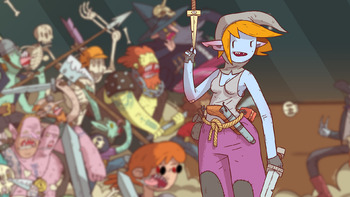 The Street Rat
An elven thief whose face is often found on 'Wanted' posters, as her name suggests.
Rose/Queen of Shadows 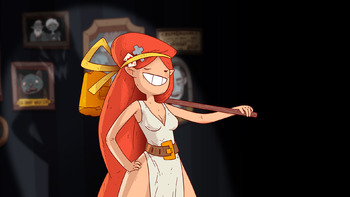 The (Mostly) Holy
A pure and holy priestess with an unhinged temperament and a chain-smoking alter ego (who is about as unstable).
Muldorf 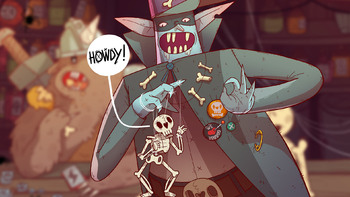 The Morbid
Once known as "The Great Muldorf", this gin-drinking hero accidentally consumed the spirit of an evil genie. He now walks the earth as Muldorf - Necrodude/Necroperson!
Varfa & Orhu/Bongo/Caw
A brave ranger who patrols the wilds with her menagerie of dysfunctional animal companions.
Boris
In the same band as Bruno. When he's not slinging tunes, he's bodyslamming mages. It's said he wears the crest of the Magic Guild on his neck upside down as a sign of disrespect for the magical arts.
Advertisement:
Redbeard
One of the famous "Beard Brothers" - A can of mages that take pride in there robust manes. Redbeard is wanted for arson in three kingdoms.
Lagovaz
After the meteor fell, roving gangs began to take charge of fallen cities. Streetwise Elf-ish such as Lagovaz quickly discovered their talents were more appreciated in the new order.
Poh Rey Cardoso
Cardoso didn't exactly *want* to be a vampire, but he didn't have much choice in the matter.
Advertisement: 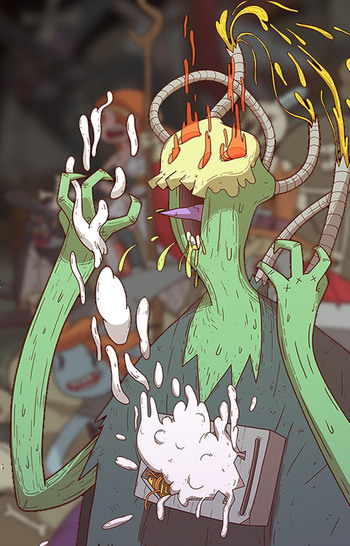 The Reborn
A revived revenant warlock who is calling down the meteor to ravage all of creation once again. While he possesses a wide variety of abilities, he gets stronger the more he fosters the "Doom" gauge unique to his boss fight. Enjoys picking his nose.
Ghost King
A spectral monarch who rules over the Crypt. His deck is centered around stamina reduction and draining hit points to heal himself.
Sandman
A whirling, living tempest who roams the Desert. He possesses an electricity-based deck.
Gregory
An egotistical demi-human who frolics through the Plains. He's the most straightforwardly physical fighter among the bosses.
Swampalina
A corpulent hag who stews curses in the Swamp. She uses poison and curse damage to debilitate and destroy intruders.
Elmer
A screaming tree who constantly yells about his own superiority in the Forest. In battle, he erects tremendously thick defenses to protect himself and wear down his enemies.
Bartholomew
A destructive, orange dragon who dwells in the Cave. Fire is his element of choice.
Calacas
The restless ruler of the Boneyard. Calacas competes with the Ghost King to become the ruler of each new lost soul.
W'aggu
The king of the Gobloids who fights in pursuit of the Great Gobloid Republic.
Sir Bramble
King of the Barbearians, is also a connoisseur of battle royal. Adventurers come from all over the world to seek glory and titilation in his arena.
Itchitah
A powerful shawoman and chief electromancer at GlowTech.
The Exile
The Exile wanders the wasteland collecting Gew-Gaws and Artifacts for reasons unknown and to (probably) be revealed. 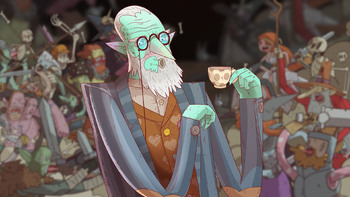 The Mysterious
A green curmudgeon who showcases his "tales" with tiles in various boxes.