Due to the ever-changing nature of this series, all spoilers will be unmarked. 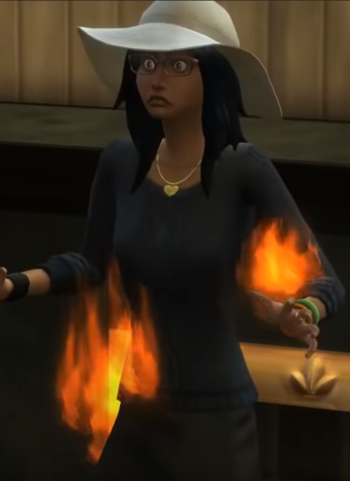 The Fire Lady is a random Sim who often appears out of thin air and just as suddenly catches on fire. Despite this, she doesn't actually seem to be affected by the flames all that much, considering she often stays on fire for multiple hours. 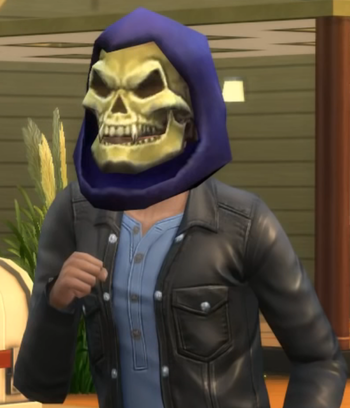 A teenage Sim with Skeletor's head. He's a robber and occasionally steals money from some of Joel's Sims, mainly Bulk Bogan.

A dark skinned child with a remarkable resemblance to Johnny Zest, however his relation to him, if there even is one, is unknown. Appears in Parts 3 and 12, wandering around Johnny Zest's lot. In Part 12, Johnny invites Spongebob to a party "for the toddlers", which some have taken to confirm that he is the child's father. 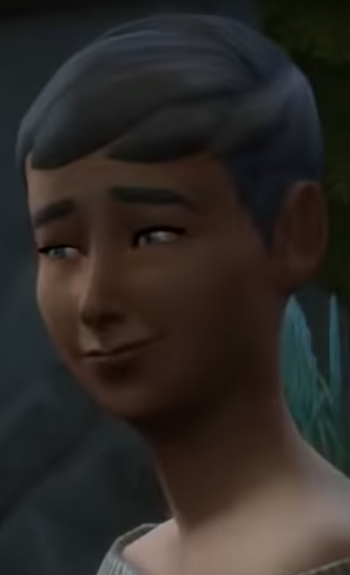 Another neighbor of the Bogan house. An old woman originally named Kayleigh Ordonez, Kayleigh was constantly home invaded by the Bogan house members. In Part 2, Joel uses the power of Create-A-Sim (explained as Dio's vampire Stand powers) to rename her to Enyaba (a reference to Enyaba Geil from JoJo) and turn her into a drug dealer. She dies in Part 5 when she's blown up by Kira after she kicks his trash can.

Bill Gates is a sim who appeared in part 1, where he and Mortimer Goth broke into the Bogan house while Garfield was burning, and started playing on their GameCube rather than try to help Garfield. Geoffrey/Bill is one of The Sims 4's pre-made Sims

A sim who appeared in part 1, where he and Bill Gates broke into the Bogan house while Garfield was burning, and started playing on their GameCube rather than try to help Garfield. Mortimer is one of The Sims 4's pre-made Sims

A random sim, who may be a possible relative of Bulk, that was immediately murdered by Garfield in Part 1. Dio cannibalized his ghost in Part 3, though he survived due to already being dead. 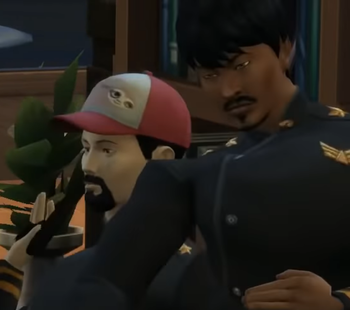 Two local police officers from Oasis Springs, who regularly show up whenever someone's been killed. 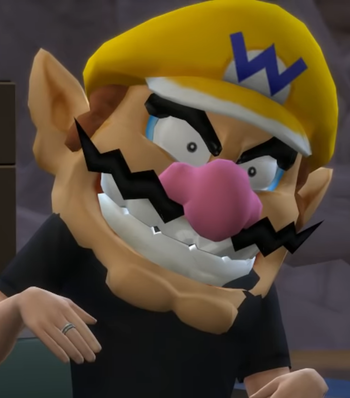 "WAAAAH! That is so fascinating! WAAAAAAH! Let's go inside and slam heroin, bro! WAAAAAH!" 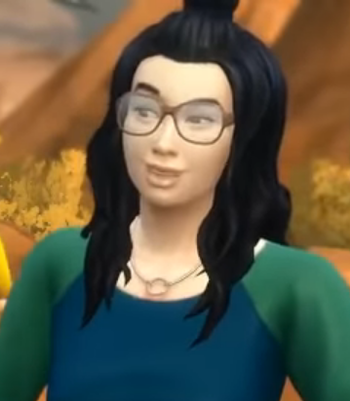 "Your life has come to an end."

A trainer at the gym Bulk befriended during his Mushroom Samba in Part 2. She surprisingly doesn't mind his antics and occasionally visits the Bogan Household.
Kory Fuller

A random Sim who was murdered in Part 5 after being run over with a car. He later returned in Part 7 in ghost form, where he was seen dancing and dabbing on his own grave, while the Cory in the House theme song played in the background.

A random ghost who ends up eating Big Smoke. 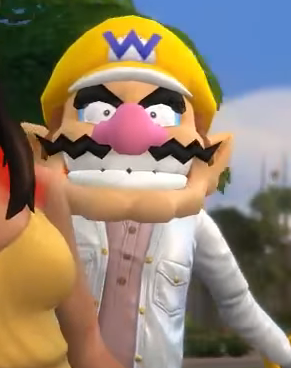 Another version of Wario wielding a Keyblade. He's also a bartender.
The Bullies

Two randomly-generated female Sims who showed up at the climax of Part 10, and launched an unprovoked attack on Dio. They very quickly learned to regret their decision.

A burglar who decided to do an armed robbery in the middle of Jill and Nemesis' wedding before being shot and wounded by Jerma, then shot dead by Johnny Zest. Not to be confused with the non canonical Immortal Burglar.

A corrupt cop who uses rather underhanded methods to clean the streets of criminals, such as hiring hitmen like Albert Wesker.

A group of kidnappers who end up taking Wesker and holding him for ransom money. They later do the same to Layne Hartman, despite him being a ghost.

A bedraggled clone of Wesker, seemingly summoned as a result of the Kidnappers taking its real counterpart away. 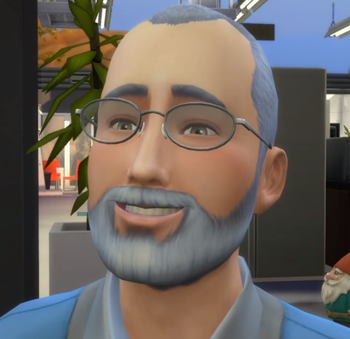 First Appearance: Part 14 (His picture first appears in Part 7 however)

An elderly man, famous from Call Me Kevin's Sims videos where he's a restaurant owner, movie star, art salesman, movie producer, serial killer and cult leader; however in the Meme House universe he's just the manager of WacDonalds restaurant and strip club. Jim is a source of confusion for Joel, as he hasn't watched Kevin, so doesn't understand why chat is calling Jim "Dear Leader" or how they all seem to know who he is already.

A group of wicked dominatrixes who delights in forcingly performing CBT upon innocent men. They are summoned whenever someone dare perform Extreme CBT.
Emory Hutchins / 'Jerma Cop'

A cop who resembles Jerma, who appears to have taken over the Oasis Springs Police after the deaths of the Super Demon Cop and Nathan Fontenot and the retirement of Nick McLaughlin.

A set of five extremely dangerous Sims resident to Oasis Springs that appear to be affiliated to each other. So far, four of the Immortal Five have made physical appearances, being Anakin Skywalker, Dantette, Shaggy Rogers, and a brief appearance from Lee Weiss - the last member (an old lady) is briefly seen on wanted posters set down at the CD-I Household. Death does not phase them, as they simply reincarnate into a new body, identical to their predecessor.
'Anakin Skywalker'/ Dorian Cook 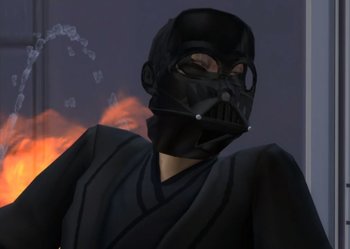 I KILLED THEM ALL!!! WOMEN AND CHILDREN!!!

A Jedi Knight and mask-wearing pyromaniac seen around the Bogan household.

A mysterious red-haired woman riding a motorcycle, and a recurring character appearing in Part 14. Her nickname comes from Joel calling her 'Female Dante'.
'Shaggy'

A seemingly ordinary and pathetically lonely nerd who's actually a serial killer who targets anyone that turns him away.
'Piss Doctor'

A University Teacher and member of The Immortal 5 who briefly appeared in Part 13, before making a full appearance in Part 18.
'Nanny'
An insane old lady who may or may not be related to Grandma Martha from the Magic Bullet special. She offers to work as a nanny for households that have no kids.

A group of Russian mafiosos that work underneath Liquid Bogan in Season 2, they're shown to have a distinct hatred for the Bogan household.
General tropes of Mafioznik 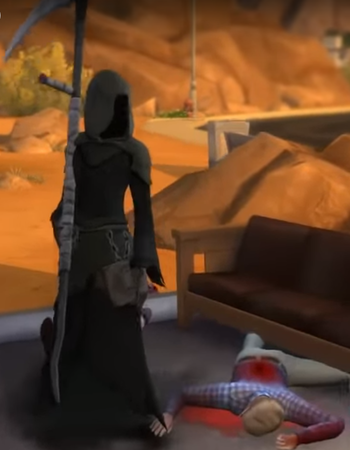 Death at the first of many, many reapings in the series.

The manifestation of death who always appears whenever a Sim dies. He tends to reap their soul and leave their ghosts after every death. He has appeared in every episode due to how many times people have died. He is revealed to be Joel himself in the premiere episode of Season 2.

First Appearance: Part 1 (As a Poster)
Todd: "It just works."

The video game designer and the director of Bethesda Game Studios, known for being behind games series such as The Elder Scrolls and Video Game/Fallout. In Meme House, he first appears as a poster in Part 1, before being revealed as the moon in Part 10.

A group of demonically mutated random Sims who start to show up more and more as the series progresses. The reason for their existence is technically unknown, but it's heavily implied it's Bonzi's corruption that makes them show up. 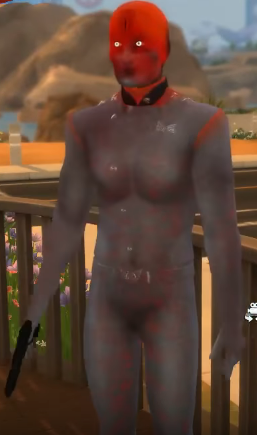 A member of Bonzi's demon army who may well be Bonzi's second in command, the Super Demon Cop is one of only a handful of special demons who began appearing as Bonzi's corruption neared 100%.

Introduced in Part 5, it showed itself to Bonzi Buddy and granted him demonic powers. Not much is known about it, but some speculate it to be Satan.

A strange phenomenon first seen in Season 1 with Pepsiman's human form, and then occurring more frequently in Season 2. The red-eyed people are just that: randomly generated Sims with unnatural red eyes, but otherwise normal bodies. The reason for their existance, and their relations, if any, to the demons and the Demonic Painting are yet to be seen. Pepsiman is the only playable Sim to have them. 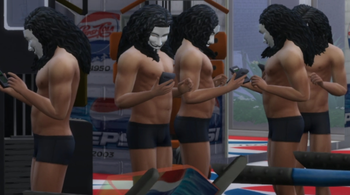 Eight members of a mysterious cult who sometimes appear around the towns in Season 2. Not much is known about them, except they're all identical and seem to be connected at what lies beneath the Pepsi Gym.

A mysterious masked man that Bulk stumbles upon while infected with the Uroboros Fruit. He's a living enigma, and not much is known about him.

A mysterious entity connected to Wesker's Uroboros Fruit. She's at first mentioned after Bulk eats a fruit and gets infected. 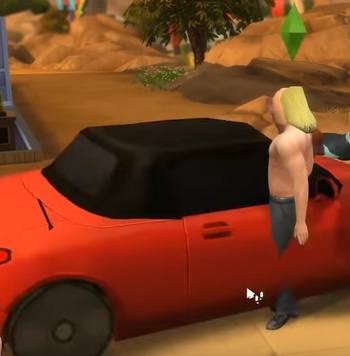 The Fan Nickname for Bulk Bogan's Stand, which takes the form of a car and runs down any target, regardless of where they are. While Joel has stated Motörhead to be non-canon,

he does draw close to confirming it to belong to Bogan when Nemesis is ran down by a taxi in the non-canon Part 11.

A monstrous abomination from Jill's dreams which appears out of nowhere to attack those she cares for the most. He manages to withstand Wesker's BERSERK technique, and from there things only get worse...

Jill and Nemesis' newborn son, named in honor of the dead Spongebob Squarepants. He never actually existed, due to being a figment of Jill's dream.

Bill Murray Ghostbuster
Bill Murray from Ghostbusters (1984). He was created to deal with the ghost problem, but was distracted by food and was mistakenly turned into a Plantsim/pickle. Due to his newfound vulnerability to fire, he burned down when 'Anakin' set the Bogan household on fire and was erased from existence when the game was reset to before it.

A snobby elderly woman who lives in Mick and Meme's house.

An even older elderly woman who lives in Mick and Meme's house.

A fat, bald man who loves food more than anything else.