The world is too much for Ciel to bear alone...Take good care of her, Zero...

The Resistance engineer. He gives Zero the Shield Boomerang and the Rod of the Week at the beginning of every game, except the fourth where he just gives him the Z-Knuckle. He also stores information disks for the player.

I'll leave this world to you...
Voiced by Takahiro Mizushima

The previous hero Mega Man X is still around, but in the form of a Cyber-Elf. He returns the Z-Saber to Zero at the beginning of the first game, then shows up to be the mentor at random times. In the second game, it's revealed that he used his body to lock up the Dark Elf.

Not just a character, but a whole lot of characters. The characters within La Résistance are worth mentioning enough.

Thus the war of the machines began and humans can only watch...
Voiced by Yuko Goto

A main character in Zero 4. She is the leader of the La Résistance neutral-analogue Caravan, aspiring to bring all humans out of Neo Arcadia and into New Eden-esque Area Zero. She is in love with Dr. Weil's new second-in-command, Craft, a fact that none of her fellow evacuees know... 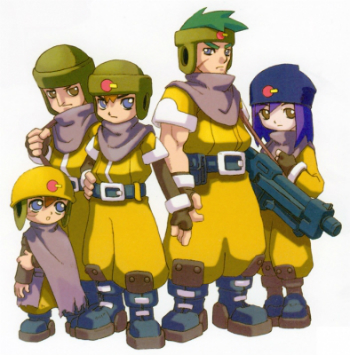 A group of humans who escaped Neo Arcadia with Neige. The prolonged Robot Wars have jaded their view of Reploids. Unfortunately for them, Zero's the only one who can stop Ragnarok...