This page is for listing the tropes related to the Non-Citadel Space species in the Mass Effect universe, each with their own (often averted) tropes. 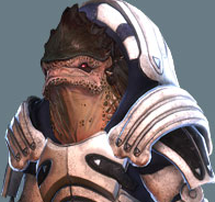 You ask a krogan if he'd rather find a cure for the genophage or fight for credits, he'll choose fighting — every time. It's just who we are.
—Urdnot Wrex

The krogan originated on the Death World of Tuchanka, which made them an extremely resilient — and violent — species. These traits have caused them to have a very troubled relationship with the other Council species; the physiology which makes them so difficult to kill (which includes, among other things, duplicate and even triplicate organs and redundant vital systems) made them crucial to ending the Rachni Wars, but once they were allowed to settle other planets, their population exploded and they began moving in aggressively on worlds already settled by other species, leading to the Krogan Rebellions and the introduction of the genophage. Most krogan encountered around the galaxy are hired thugs of one brand or another.

Krogan are available for multiplayer, and can use the Sentinel and Soldier classes. The Resurgence pack adds Battlemaster Vanguard, Retaliation adds Shaman Adepts, and Reckoning adds Warlord Sentinels. 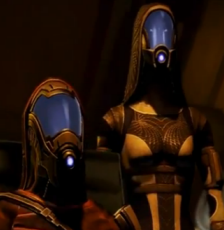 It's always the same thing. "Ooh, she could get sick. Ooh, she's vulnerable. I wonder what she looks like under the helmet."

The quarians were a former associate-level member of the Citadel, until their AI servants, the geth, overthrew them when the quarians attempted to exterminate them following the realization they were gaining true sentience. With all their worlds taken from them, the quarians were left homeless, with the surviving population living aboard the traveling Migrant Fleet. Life on the flotilla has taken its toll on them; the sterile environment has caused their already-finicky immune systems to atrophy, rendering them almost entirely trapped within their environmental suits.

While technically the Migrant Fleet is not part of the Citadel, they still have to abide by Citadel laws while in Citadel space, which is why they stay out of Citadel territory if possible. Historically, the Citadel in general and the Council in particular have sided against the Migrant Fleet in legal matters, which has not improved relations much.

Quarians are available for multiplayer, and can use the Engineer and Infiltrator classes. The Rebellion Pack adds male quarians (with entirely different movesets) for the same classes, while Retaliation adds a (Male) Marksman Soldier. 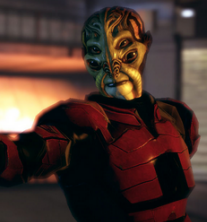 A species whose formal political entity, the Batarian Hegemony, has separated from the Citadel Council due to perceived favoritism toward humanity during territorial disputes. Their society is caste-based (including slaves), and the Hegemony is also known to condone and support illicit terrorist activities against Citadel and other states, particularly the Alliance. 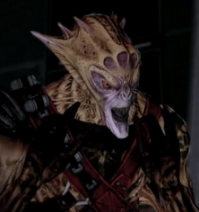 The vorcha are a short-lived (they're lucky to live to 20) species with the ability to adapt to any condition or climate at least once in their lives. Disorganized and frequently savage — vorcha who grow up in violent situations inevitably adapt to violence themselves — the stereotypical vorcha is a brute whose only skills are taking life. Most people consider them to be little more than talking vermin and they are usually only seen as cannon fodder for mercenary groups such as the Blood Pack. 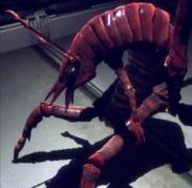 The rachni were an insectoid race who attempted to invade Council Space approximately 2,000 years before the start of the series. They were defeated only when the salarians recruited the krogan, who proceeded to hunt the rachni into extinction. In Mass Effect, Shepard discovers an attempt to bring the rachni out of extinction. 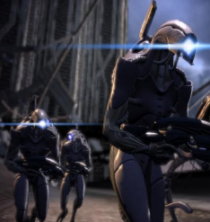 As individual runtimes, we are no greater than your software. Only when we share data do we become more.
—Legion

A race of synthetic constructs created by the quarians. Designed as Virtual Intelligences due to the threat of a Robot War, the quarians were not content to let well enough alone, and tinkered with the geth software enough to accidentally turn them into true AI. The quarians attempted to shut down their creations before they became sentient, due to both the Council's laws against AI experimentation and the concern that they'd be keeping living beings as slaves. The attempt failed, and the geth retaliated militarily, and eventually pushed the quarians off the homeworld of Rannoch, not to mention their colonies. Afterwards, the geth avoided contact with the rest of the galaxy, and killed anyone who entered their territory. In Mass Effect, the geth ally with the rogue Spectre Saren Arterius to attack Council Space. The geth political entity is known as the "Geth Consensus" and is synonymous with their race's Hive Mind. 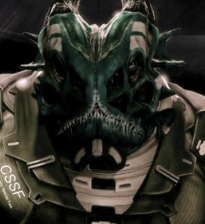 Hailing from Parnack, the yahg are known for their violent and aggressive nature. Consummate predators, the yahg possess unrivaled perceptiveness and mental adaptability. Discovered by the Citadel Council in 2125 CE, the yahg were unceremoniously barred from interaction with Citadel space after massacring the Council delegation.

As the yahg have yet to achieve interstellar spaceflight, Parnack goes unmolested during the Reaper invasion, and Admiral Hackett notes that they could end up running the next galactic cycle if everything else goes south. Given how dangerous they are now, the Reapers could seriously have their work cut out for them if the yahg had an additional fifty thousand years of advancement. 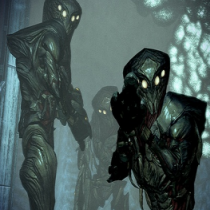 Homeworld: The Collector Base

An enigmatic race from beyond the Omega-4 Relay, an unmapped relay from which no non-Collector vessel has ever returned. They've been around for centuries, yet only a few have ever seen them in person and many don't even believe they exist. They offer highly advanced technology in exchange for genetic samples from different species — and by 'samples', we mean living victims who are never heard from again.

In the aftermath of Sovereign's attack, they begin abducting entire human colonies for an unknown purpose.

They return as adversaries in Mass Effect 3 in the Retaliation Multiplayer DLC, and the Reckoning DLC adds the Awakened Collector Adept. 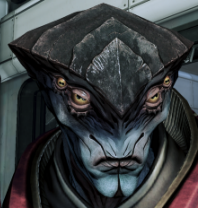 The Protheans were once the galaxy's dominant species. They are believed to have built the Mass Relays and the Citadel. However, they mysteriously vanished approximately 50,000 years before the series started. 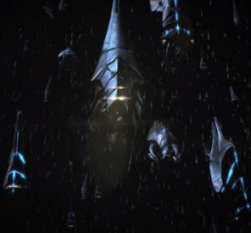 We impose order on the chaos of organic evolution. You exist because we allow it, and you will end because we demand it.
—Sovereign

Homeworld: N/Anote It is entirely unknown where the first Reapers' creation took place, and the Reapers have no known need for a planet or base to call home.

A race of machines who are believed to have hunted the Protheans to extinction. Shepard discovers that the Reapers are about to return and spends the trilogy trying to stop them. 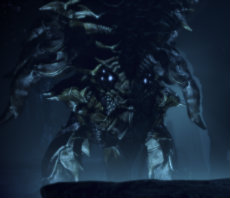 Mysterious creatures, one of which is apparently powerful enough to kill Reapers. They're eventually revealed to be the creators of the Catalyst, and by proxy the Reapers.

A relatively newcomer race on the galactic scene, who made first contact with the asari in 2184. During the Reaper invasion, they retreated to their homeworld, destroying their more advanced technology in the hopes that the Reapers would possibly spare them.

A race of one billion who, in order to escape from their dying sun, had downloaded their consciousnesses into cyberspace aboard a spaceship. They were in search of a new power source when they stumbled upon salarian space and entered negotiations. 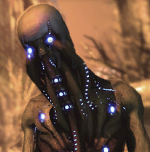 The precursors to the Protheans, from at least one cycle before them.

A race that inhabited several worlds in the Zelene system until they disappeared 300,000 years ago. Archeological evidence showed they were likely as advanced as modern galactic species. Likely wiped out by the Reapers.

A primate-like species that colonized the planet Bothros. Where they came from and how long they existed is unknown. Likely wiped out by the Reapers.

A race that existed during the time of the Protheans, the Densorin were known to have studied highly advanced celestial mechanics and morphological simulations of galactic language, to the extent their knowledge in these areas was beyond even the understanding of Protheans. In desperation or madness they sacrificed their own children to placate the Reapers. They were wiped out soon after.

A war loving race that existed during the Prothean cycle. They were presumably wiped out by the Reapers like the other races of the time.

A race that existed alongside the Protheans. Attacked the asari home-world of Thessia but were driven off by the Protheans. They also fought the densorin. They were presumably wiped out by the Reapers.

A race that lived at the same time as the Protheans. They did not survive to see the Reapers' arrival.

A race that existed 127,000 years ago. Went to war with the Inusannon over the planet Eingana.

An ancient spacefaring race. On the planet Armeni, near the equator, there are millions of elaborate crypts belonging to this long-dead race. However, efforts to excavate the site by archaeologists have proven difficult due to Citadel Council law forbidding the disturbing of graves.

A synthetic race that existed around the time of the Protheans. They were created when a race called the zha resorted to using implants and symbiotic A.I.s to survive as their world became inhospitable. They were swiftly taken over when the Reapers arrived, forcing the Protheans to wipe them out.