This page is for listing the tropes related to the Citadel Associate/Client/Protectorate species in the Mass Effect universe, each with their own (often averted) tropes. 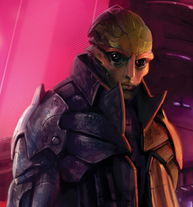 The reptilian drell are a client race of the hanar. Overpopulation left the drell planet polluted and starved of resources before the species had even developed fusion power. The hanar saved hundreds of thousands of them as their world died; in gratitude, many drell choose to serve the hanar in some fashion under "The Compact", becoming part of the Illuminated Primacy. Do not compare this with slavery within drell earshot: "Anyone can refuse to serve. Few do. We owe our existence to the hanar. We are proud to repay the debt."

Unfortunately, the transition hasn't been seamless. Drell physiology evolved on a primarily arid world, but most of Kahje gets rained on at least once per day. Their lungs can't handle the moisture, and a terminal disease known as "Kepral's Syndrome" often occurs in late adulthood.

Drell are available for multiplayer, and can use the Adept and Vanguard classes. Retaliation adds Assassin Infiltrators. 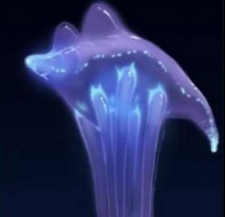 The hanar, who refer to their government as the "Illuminated Primacy", live in the oceans and communicate through bio-luminescence, which makes adapting to galactic society more of a challenge for them. Other species mainly know them as "those excessively polite jellyfish who worship the Protheans." They also saved the drell from total extinction nearly a century pre-series. 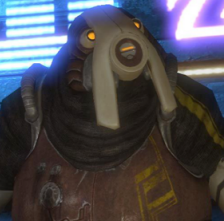 The volus tend to be great businessmen and run many of the galaxy's wealthiest corporations. Their native environment has an extremely high-pressure atmosphere, such that subjecting a volus to earthlike pressures actually results in Explosive Decompression. So when not on their worlds they wear exosuits which cover their entire bodies. Although the volus were the third species to discover the Citadel, their small military has led to them being denied a seat on the Council because they are unable to make the contributions to galactic security that are expected of the Council races. To compensate for their small military, the volus have become a client race of the Turian Hierarchy, officially dubbing themselves the "Vol Protectorate", lending their economic know-how to the turians in exchange for turian protection. 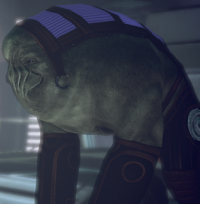 The elcor are natives of Dekuuna, a world with incredibly high gravity. As a result of living on a world where even falling down can be lethal, the elcor have developed a very patient culture. The elcor speak in monotones, but use scent and subtle facial cues to indicate the tone of what they are saying. Since other species cannot perceive these cues, elcor who frequently interact with other species are trained to prefix their speech with an emotive indicator. 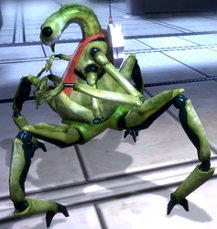 The keepers are an insectoid race that inhabit the Citadel. They do not acknowledge the other species and all they do is maintain the Citadel, which they seem to understand better than anyone else who lives there. It is generally believed that the Protheans created them, but no-one knows how they sustain themselves or where they even get the materials for their repairs.