This is the character page for the Mary Skelter trilogy. Be warned that there is a possibility of encountering unmarked spoilers, between self-explanatory tropes that cannot be spoilered per site policy, numerous Walking Spoiler characters, and things spoiled by the mere premise of the sequels. 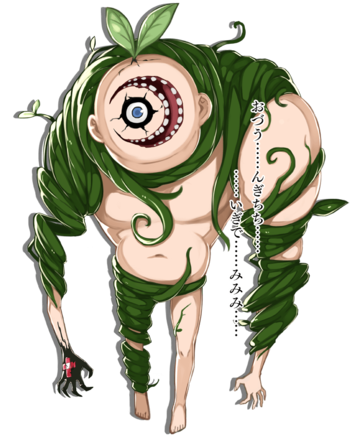 The protagonist of Mary Skelter and one of six for Finale. Despite being timid, he has a strong heart and assists the Blood Maidens in finding a way out of the Jail.

Jack's good friend, whose soft spot for him betrays her normally calm demeanor. She joins the Blood Maidens in order to escape with Jack from the Jail. 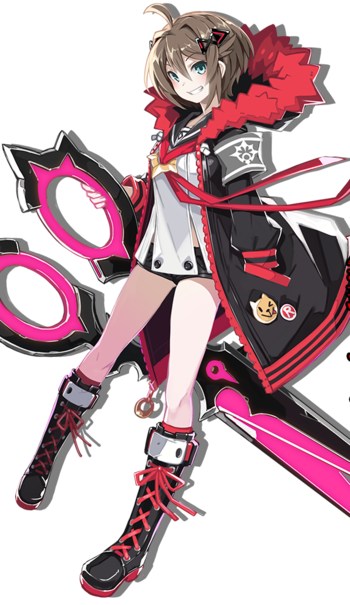 An older sister type who brazenly traverses through the Jail. Being the first Blood Maiden, she currently acts as the unit's leader. 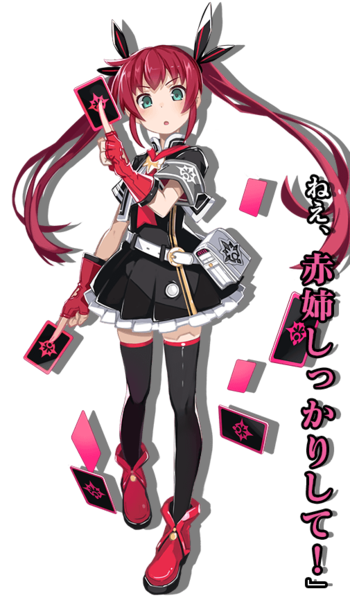 A young girl often found scolding or pushing Jack around despite his best effort. Her dislike towards showing her true self often makes her act a bit fidgety in front of others, especially Jack. 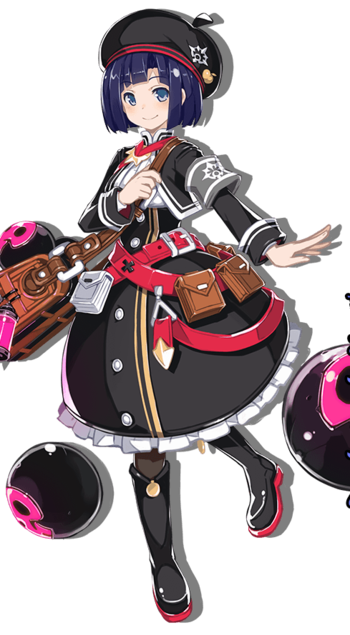 She always tries to lend a gentle but clumsy hand to Jack. Her fear of mirrors may be due to her lack of self-confidence.

A young girl with a kind heart. Her approach is often mysterious, but ultimately helpful. She conveys her feelings through head nods, and always looks tired and sleepy.

A girl who lived in the Dorm area with the Nightmare, Hansel. Naturally curious, but seems to lack a sense of right and wrong. For whatever reason it may be, Jack's kind nature seems to spark great interest within her. 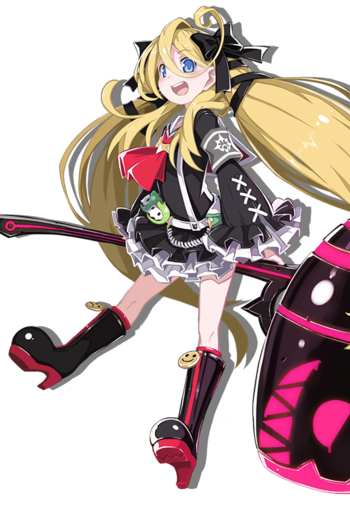 A golden-haired girl full of energy, who sometimes mistakes Jack for food. She seems to like Sleeping Beauty and can be found taking naps on her chest. 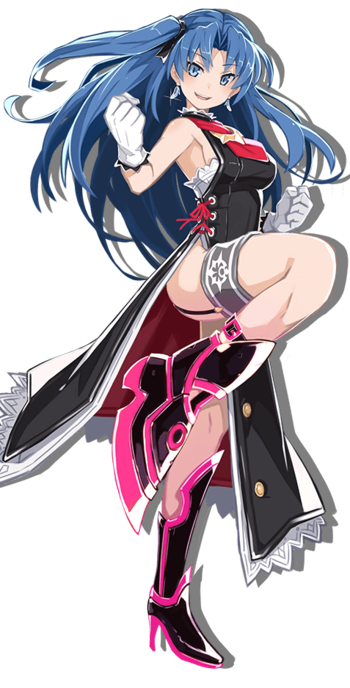 Click to view Cinderella as she appears in Mary Skelter 2

A girl with a holier-than-thou attitude, which she uses to mask her very modest nature. She has a quirk of wanting to keep things sparkling clean. She often dwells on what she did, even to the point of self-loathing. 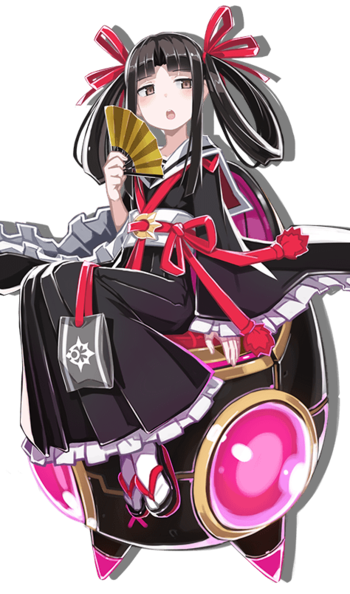 An amazingly lazy girl known for always cruising on her special ride, Bamboo 1. She seems to have some secrets up her sleeve, which are used to help her general laziness. 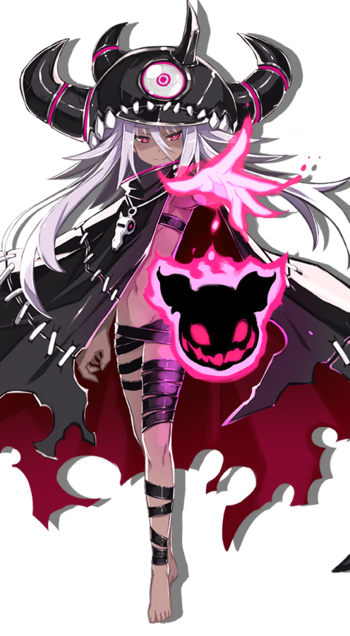 A young girl who struggles in articulating ideas, which disrupts the aura of fear she attempts to convey. She treats everyone arrogantly except for Alice, who she reveres. 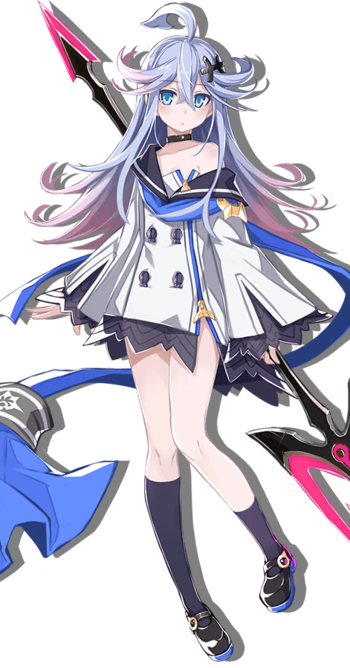 A Blood Maiden who fell victim to Blood Skelter at a young age and lost her life as a result. She is alive in Mary Skelter 2, placing others' happiness before her own and deeply loving her "prince" Otsuu.

The protagonist of Mary Skelter 2, who serves as Little Mermaid's "prince." She shares a mental link with Nightmare Jack.

A mysterious woman who, like Mary, lived in the same district as Jack and Alice. She somehow knows of Jack and the Blood Maidens, as well as secrets only they should have known. Although she knows she is a Blood Maiden herself, she chose to live in the shadows alongside Mary, rather than join the Dawn.

After the Massacre Pink attack, she decided to join the fight herself in order to protect Mary and Alice.

One of Mary Skelter Finale‘s protagonists. She’s always lived in the same liberated district as Jack and Alice, but due to her lack of presence, she’s always been alone without being recognized by others. She accepts and even enjoys being by herself, and she lives with a rather positive attitude while striking her matches and seeing visions.

The one who recognized her and gave her her name is Charlotte, so she treats her like a parent with a twisted attitude. After the Massacre Pink attack the group, she ends up working together with Charlotte and Alice.

A researcher who holds vast knowledge of the Jail, and is extremely passionate about escaping from the Jail. He raised Red Riding Hood from infancy, thus bringing her to call him "Dad".

She's cool and calm, but also very kind-hearted. She gives counsel to the Blood Maidens, and also works closely with the professor.

Click to view Clara as she appears in Mary Skelter Finale 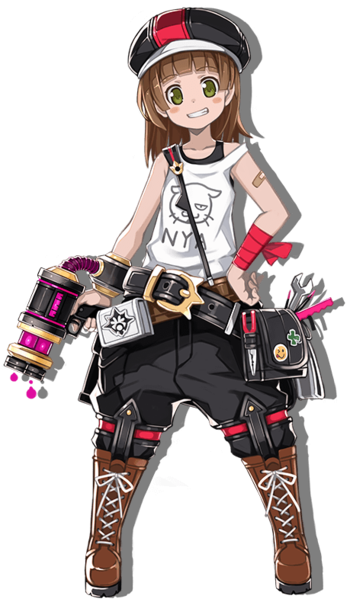 A bright and lively young girl who works as Haru's doting assistant. She is usually found manning the general store.

The guard at the entrance to the Liberated District. Despite being a normal human, he's strong enough to hold off the Marchens.

A woman who was originally in charge of odd jobs at the Dawn. She has bad memory and is clumsy, so she’s troubled by what she can do to help. However, whenever she finds something she can help out with, she’ll give it all she has without giving up on it. She also tends to have bad timing and ends up seeing things that she isn’t supposed to see.

The Order of the Sun

A calm and stern young boy, who is also the sub-leader of the Order. He works closely with Oohime and preaches her words to her followers.

A calm woman who’s a member of the Order of the Sun. While she wants to be as strong as their leader Michiru, she knows inside that it’s not possible for her. So she decides to keep believing that the Sun exists, so that she can live a life without shame when the Sun does come up. 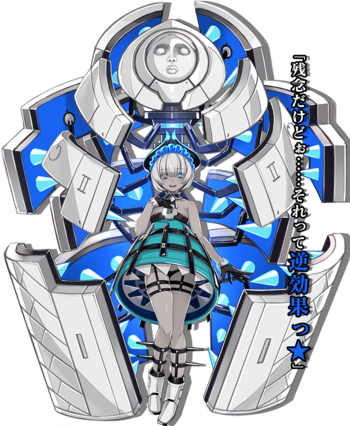 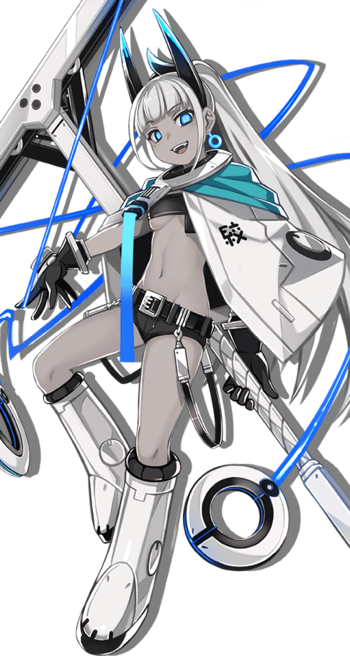 A young girl living on Leichhardt Island. She and her younger sister Elie were taken in by Rachel's family. She treats them as though they were her own family.
Elie

A young girl living on Leichhardt Island. She and her older sister Reilly were taken in by Rachel's family. She's jealous of Rachel, who has been getting Reilly's affection.

The Jails and Nightmares

Subterranean Jails
The setting of the first two games, this Jail is a massive tower that forced a portion of Tokyo over 600 meters below the Earth's surface and turned it into a fairy tale themed hellhole. The alternate ending to Mary Skelter reveals a second underground Jail formed from the remains of the Tokyo Metropolitan Building and is revealed in the remake to have been based around a Tanabata festival.
The Devouring Armada Tower and Surface Jails
The setting for Mary Skelter Finale. The colossal Devouring Armada Tower flies over the Earth's surface, with several smaller Jails below it; The Jail Tower of Judgement, the Jail Tower of Extreme Cold, Leichhardt, the Eisern Jail Tower, the Grave Jail Tower, and the Jail Tower of Salvation. 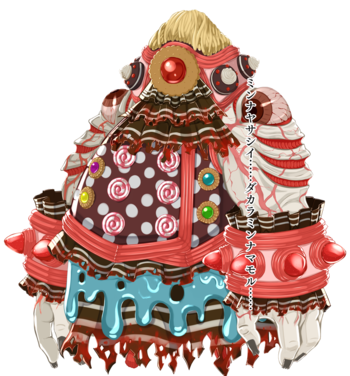 A Nightmare that lives in the Dorm area. He kills any persistent intruders to protect his home and his sister Gretel. In Mary Skelter 2 he moves with her to the Hameln Liberated District, and continues to keep his new home safe.
Tower Nightmares
The Nightmares that live in the Jail Tower. They, rather than Snark, were responsible for the deaths of the Dawn's expedition team.
Other Nightmares

The Nightmare that lives in the City Streets. Its initial attack introduces Blood Skelter in both Mary Skelter and Mary Skelter 2.

The Nightmare living in the Graveyard. In Mary Skelter it attacked Thumbelina and her sisters, taking the eldest sister captive.

The Temple area's Nightmare. In Mary Skelter it hunts the Blood Team while specifically calling out to Kaguya.

The Nightmare found in the Downtown area. In Mary Skelter it chases the Blood Team and takes Cinderella's earrings.

The Nightmare that lives in the Station Grounds.

The Aquarium Ruins' Nightmare. Its attack renews Little Mermaid's trauma from the Mysterious Nightmare's attack on the Dawn, driving her into Blood Skelter.

The Nightmare found in the Art Alley.

The Nightmare found in the Metropolitan Office Jail Tower. It works to keep the Blood Team and Nightmare Otsuu from being able to revive Little Mermaid at any cost.

The Nightmare found in the Jail Tower of Judgement.

The Nightmare roaming the Jail Tower of Extreme Cold.

The Nightmare living on Leichhardt Island.

The Nightmare roaming the Jail Tower of Salvation.

The Devouring Armada Tower's Nightmare, an artificial Nightmare made by the Massacre Pink's master. 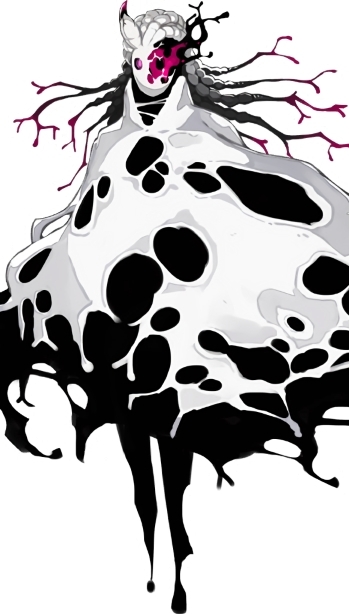 (Major Spoilers for the entire series, so proceed with extreme caution)

The "King of Nightmares". A being of unknown origin, Snark met with Professor Tohjima long ago, but has not been seen since.

(Spoilers for the first two games, so proceed with extreme caution)

A Nightmare encounter in the Underground Cavern. While the Blood Team fights and defeats it, its nature is unknown until the second game, where it is revealed that this Nightmare is actually Otsuu. 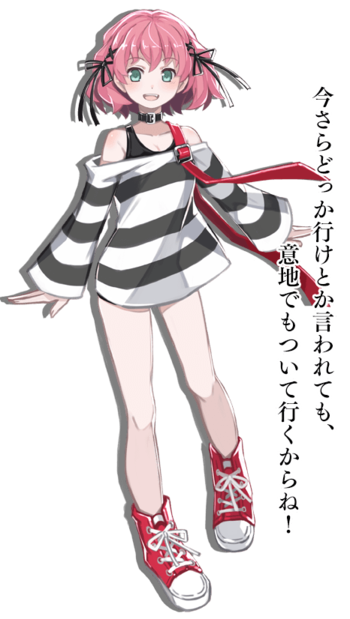 Click to view Hikari as she appears in Mary Skelter Finale 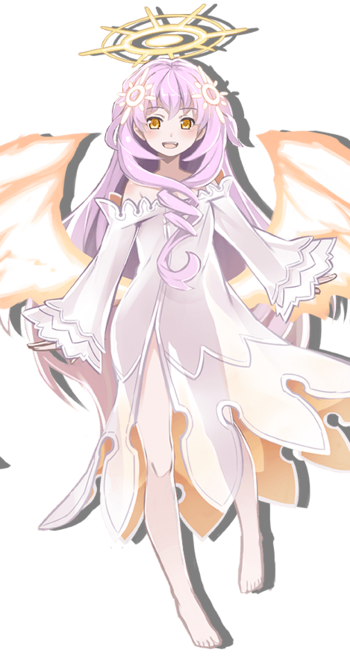 (Spoilers for Mary Skelter 2 and Finale, so proceed with extreme caution)

A craftsman with a bad mouth and a worse attitude, though he seems to care for Jack, who often questions his own usefulness. 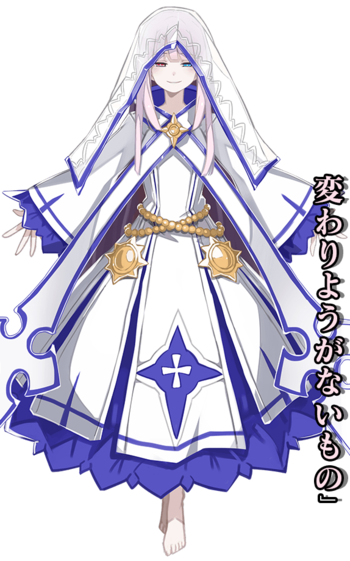 A religious leader of the Order who speaks with a shroud of mystery. She is known as Lady Oohime but her real name is Michiru. She uses confusing words which possess an odd sort of divinity.

A Nightmare found shortly after escaping the Underground Cavern, having wiped out the Liberated District, that serves as the primary antagonist of Mary Skelter 2.

One of the protagonists of Mary Skelter Finale, Toh is a young man whose past is shrouded in mystery, as he’s lost his memories. He’s calm, logical, and won’t hesitate to be cold and cruel that’s what is needed to reach his goal.

Toh only remembers fragments, such as “the need to find his precious wife,” that he’s a Blood Youth, and he is part of the Jail, and acts based on that. After the attack splits everyone up, he ends up working together with Snow White and Princess Kaguya.

One of the only surviving humans on the surface, Gatou joins Mary's group and provides information about the world's current condition.

A young girl living on Leichhardt Island. Due to her age she's not great at judging the situation, leading to her needing to be protected by her new older sisters.
Pyre 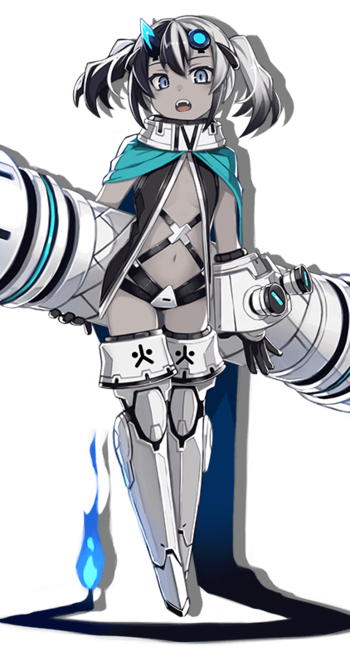 The youngest sister from Massacre Pink, which scorched the earth. No matter who she’s with, she’s mischievous, a brat, and and stubborn. Her true name is Hiaburibashira but she’s called Pyre by others.

Although she’s part of the Massacre Pink, she has trouble hurting others and, as such, is scolded and mocked by the others. As she thinks of how to get back at them, she finds an unconscious Rapunzel and sets out to execute her…